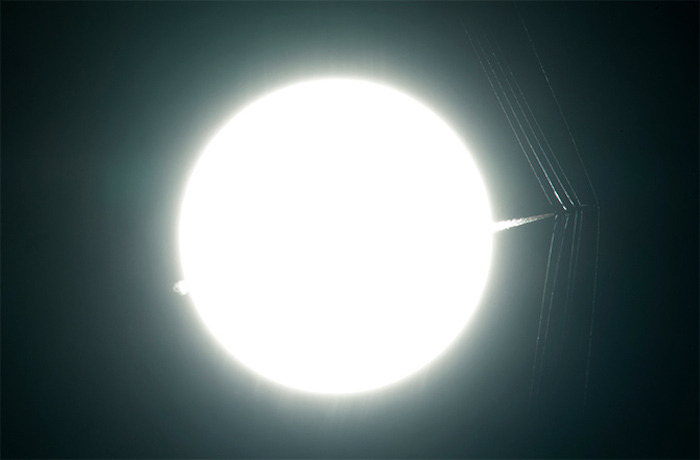 An Air Force T-38C training jet creates shockwaves in the atmosphere as it travels at supersonic speeds in front of the sun. NASA/KEN ULBRICH
-
Aeronautics will always be the first “A” in “NASA” and this image shows why you shouldn’t forget it: in a modern version of a 150-year-old photographic technique the shockwaves created by a supersonic T-38C aircraft are captured on camera by scientists at NASA’s Armstrong and Ames Research Centers.
Using the brilliant light of the overhead sun as a backdrop, NASA researchers have developed a patent-pending method called Background-Oriented Schlieren using Celestial Objects (BOSCO) to make atmospheric distortions from supersonic shockwaves visible.
NEWS: ‘Cosmic Tsunami’ Shocks ‘Sausage’ Galaxy Cluster Into Star
Invented in 1864 by German physicist August Toepler, who developed the technique by photographing electric sparks in a lab, modern air-to-air schlieren photography uses high-speed, high-definition cameras and advanced imaging software to average out background noise and reveal the shockwaves.
(Schlieren comes from the German word for “streak.”)
In the crop below the side view of the T-38C can be made out, along with the light coming through the cockpit.
NEWS: Sun Leaves No Shock Wave in its Wake
. 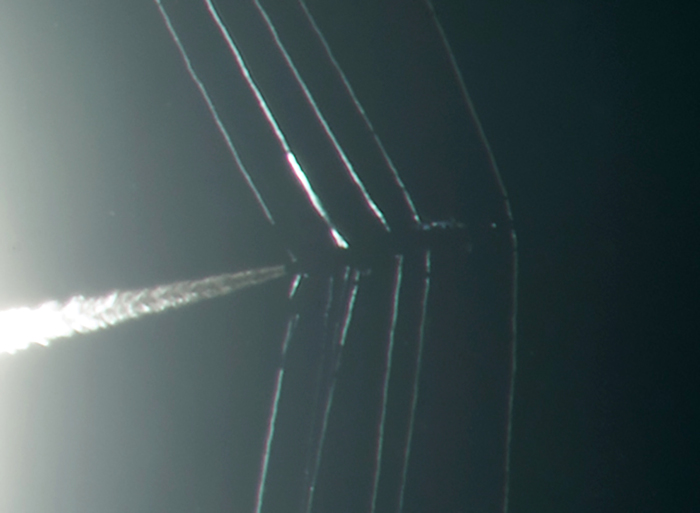 Schlieren photograph of a T-38C traveling faster than sound.
NASA/KEN ULBRICH
-
Schlieren images can be captured from either the ground or from another aircraft and each method has its own specific advantages—and challenges. The ongoing research is being performed to improve the efficiency and safety of supersonic aircraft for both military and commercial uses.
NEWS: Astronomers See Supernova Shockwave for First Time
“Air-to-air schlieren is an important flight-test technique for locating and characterizing, with high spatial resolution, shock waves emanating from supersonic vehicles,” said Dan Banks, principal investigator on the project at NASA’s Armstrong Flight Research Center at Edwards AFB in California. “It allows us to see the shock wave geometry in the real atmosphere as the target aircraft flies through temperature and humidity gradients that cannot be duplicated in wind tunnels.”
Quelle: NASA
Luftfahrt
« Zum vorherigen Eintrag Zum nächsten Eintrag »
2056 Views
Created with page4