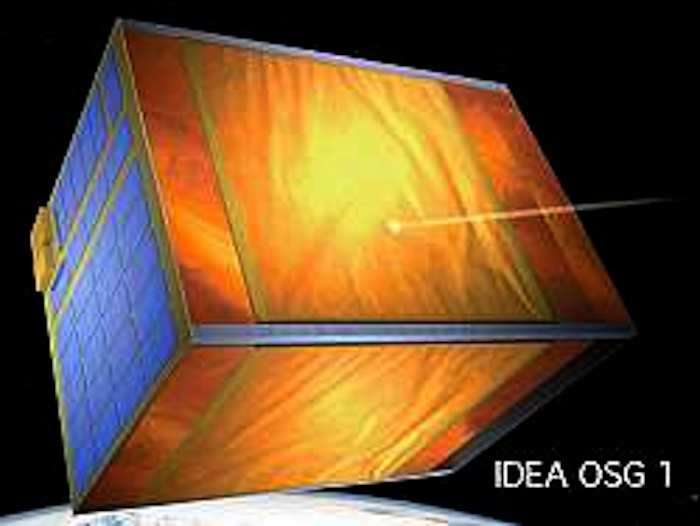 Space junk is annoying now—small objects have already popped holes in the International Space Station—but it will become an increasingly serious problem as we enter the era of cheap, frequent commercial launches. (Pretty solid work in April, by the way, SpaceX and Blue Origin. Kudos.)
Just in the last month, debris was spotted flaming over the Sri Lankan coast and a rogue object was briefly blamed for knocking out Japan's new research satellite (unfairly, as it turned out).
Enter Astroscale, the Singaporean company that just received $35 million in funding to work on clearing out some of the estimated 150 million pieces of junk floating around the ol' blue marble—especially antique microsatellites, which have a relatively short two- to five-year lifespan and will soon be deployed by the dozens and hundreds for all kinds of reasons, including mapping and communications.
Here's the plan:
Step 1: Find the junk. Astroscale will do this using a Japanese microsat called OSG IDEA 1 launched on a Russian rocket, designed to map objects less on a millimeter across—including stuff that's not visible to ground-based systems.
Step 2: Send up sticky space roombas to roam around cleaning up the junk, especially those discarded microsats. ADRAS 1 spacecraft will be covered in adhesive which will grab debris and then pull the stuff that's in low-earth orbit down to be incinerated on re-entry. Junk that's higher up will be nudged away from high traffic areas.
Step 3: Profit.
Last month, Astroscale received a big second infusion of cash, primarily from a Japanese government-based public-private partnership, but also from the private venture firm JAFCO. The first round of funding was $7.7 million in venture money a little over a year ago. The company is aiming to launch the ADRAS in 2018.
Astroscale certainly isn't the only player in this area: Last week, NASA announced an investment in a Brane Craft, a 2D membrane designed to drag space junk down to burn up, and some Russkie academics have a few ideas as well.
Looks like the market for space maids is heating up.
P.S. Space junk also causes ongoing diplomatic problems, since the U.S. has historically had more and better info about floating debris than other nations and also created more than its share of the man-made portion of that debris. Some fear space junk could even trigger global war if strategic sats are destroyed under suspicous circumstances. So we'd better get to work tidying this place up.
Quelle: reason
Raumfahrt
« Zum vorherigen Eintrag Zum nächsten Eintrag »
2246 Views
Created with page4