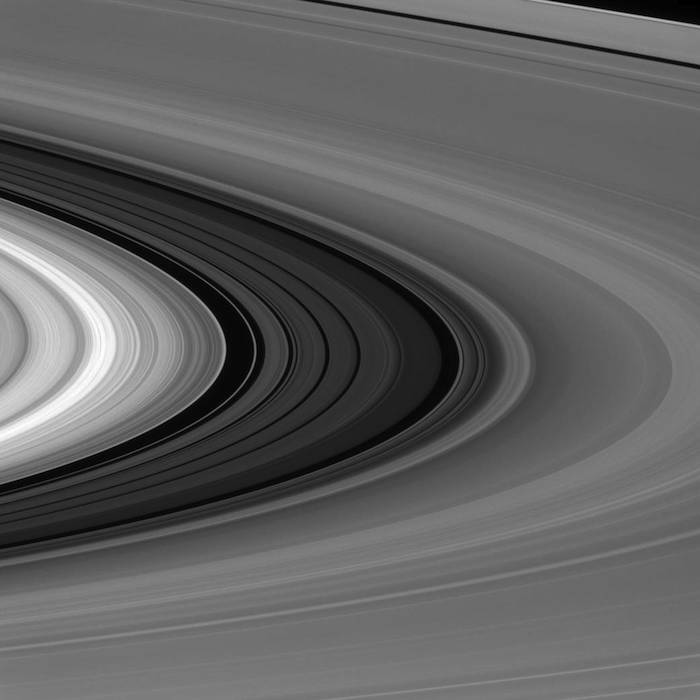 It's difficult to get a sense of scale when viewing Saturn's rings, but the Cassini Division (seen here between the bright B ring and dimmer A ring) is almost as wide as the planet Mercury. (See PIA11142 for a labeled panorama of features in the rings.)
The 2,980-mile-wide (4,800-kilometer-wide) division in Saturn's rings is thought to be caused by the moon Mimas. Particles within the division orbit Saturn almost exactly twice for every time that Mimas orbits, leading to a build-up of gravitational nudges from the moon. These repeated gravitational interactions sculpt the outer edge of the B ring and keep its particles from drifting into the Cassini Division.
This view looks toward the sunlit side of the rings from about 4 degrees above the ring plane. The image was taken in visible light with the Cassini spacecraft narrow-angle camera on Jan. 28, 2016.
The view was acquired at a distance of approximately 740,000 miles (1.2 million kilometers) from Saturn and at a Sun-Saturn-spacecraft, or phase, angle of 76 degrees. Image scale is 4 miles (7 kilometers) per pixel.
The Cassini mission is a cooperative project of NASA, ESA (the European Space Agency) and the Italian Space Agency. The Jet Propulsion Laboratory, a division of the California Institute of Technology in Pasadena, manages the mission for NASA's Science Mission Directorate, Washington. The Cassini orbiter and its two onboard cameras were designed, developed and assembled at JPL. The imaging operations center is based at the Space Science Institute in Boulder, Colorado.
Quelle: NASA
Astronomie
« Zum vorherigen Eintrag Zum nächsten Eintrag »
2225 Views
Created with page4