THE GIANT GREEN ATMOSPHERE OF A COMET: On March 21st, Comet 252P/LINEAR buzzed Earth only 5.4 million km away. It was the 3rd-closest approach by any comet in recorded history. Since then, amateur astronomer Michael Jäger has been tracking the comet, taking ever-improving pictures as 252P races into northern skies over his private observatory in Stixendorf, Austria. His latest image, obtained on March 31st, reveals the comet's magnificent green atmosphere:
. 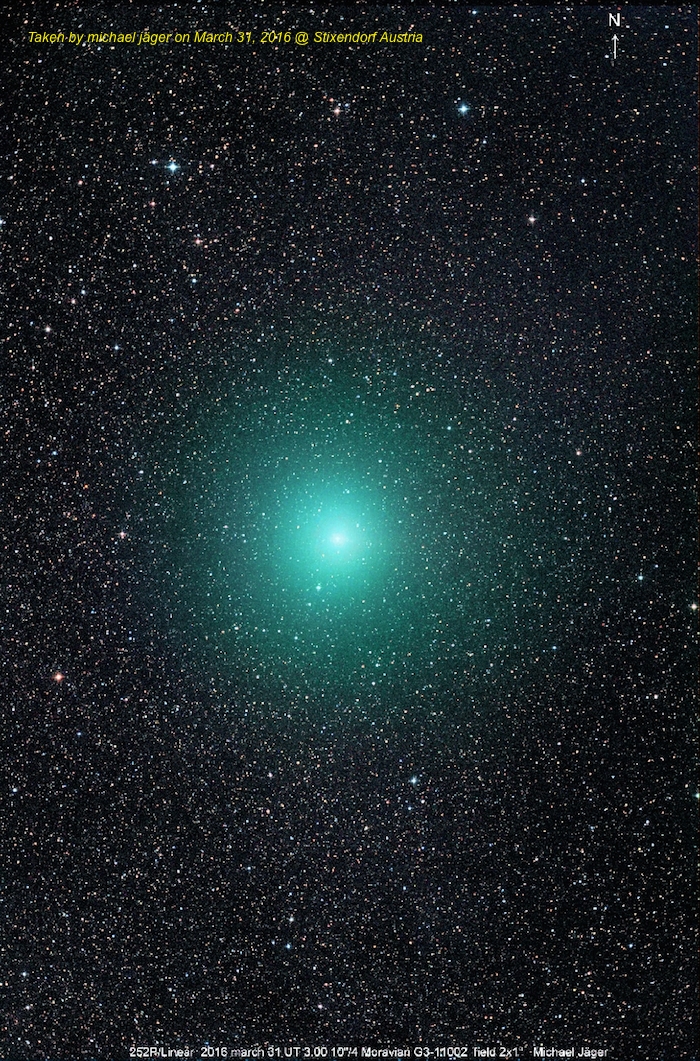 The green cloud in Jäger's photo comes from jets of gas spewing out of the comet's core. While the comet's icy core is tiny, perhaps only a few km wide, the surrounding atmosphere is enormous. The gas cloud measures 90,000 km across. This means it is more than half the size of the planet Jupiter, and about twice as wide as Neptune. Comet 252P/LINEAR is a gas giant, indeed.
The comet is green because its vaporizing nucleus emits diatomic carbon, C2, a gas which glows green in the near-vacuum of space. Astronomers who wish to see the verdant hue for themselves can point their telescopes using this ephemeris. Mid-sized telescopes and CCD cameras are required for best results.
Quelle: Spaceweather
-
Update: 8.04.2016
.
Comet passes star cluster and constellation Ophiuchus
. 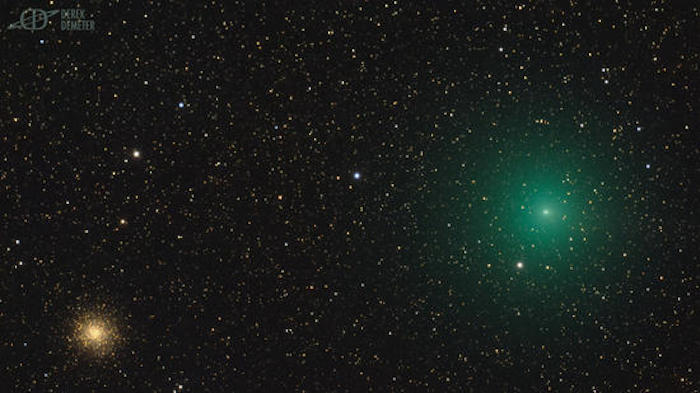 Comet 252P/LINEAR (bright green on the right) passes globular cluster Messier 14 in the constellation Ophiuchus in the early morning Florida sky on April 6, 2015. (Derek Demeter/ Seminole State College Planetarium)
In the early morning Wednesday, astronomer Derek Demeter was tracking Comet 252P/LINEAR, waiting and watching through his telescope, camera at the ready.
Demeter, the director of Seminole State College Emil Buehler Planetarium, was at Chiefland Astronomy Villages, two hours northwest of Orlando, waiting for the comet to make a move and pass something big.
Armed with a 190 mm astrograph telescope, specially designed for astrophotography, and a Canon 5D camera, Demeter took two-minute long exposures and stacked them to get the stunning image above.
Comet 252P/LINEAR is currently heading back out into the solar system after reaching perihelon or its closest approach to the sun, said Demeter, so this is a perfect time for Northern Hemisphere skygazers to spot the comet.
"The next couple weeks will be prime time, because the moon won't be as bright" explained Demeter.
In the photo above Comet 252P/LINEAR appears florescent green to right of globular star cluster Messier 14 inside constellation Ophiuchus in yellow.
“The coolest part about shooting the sky is you get to see the motion of things,” said Demeter. “Since the comet is moving it passes by objects in the sky, in this cause a globular cluster.”
Astronomy photographers have a few other cosmic events to look forward to in April.
The oldest known meteor shower, the Lyrids, returns this month. The best time to view the Lyrids meteor shower will be just before dawn on April 23, according to Jane Houston Jones with NASA's Jet Propulsion Laboratory in California.
Jupiter will be bright all month long, as it was in March and Mars becomes visible before midnight this month rising in the southeast at about 10 p.m. EST.
Quelle: Orlando Sentinel
Astronomie
« Zum vorherigen Eintrag Zum nächsten Eintrag »
2551 Views
Created with page4