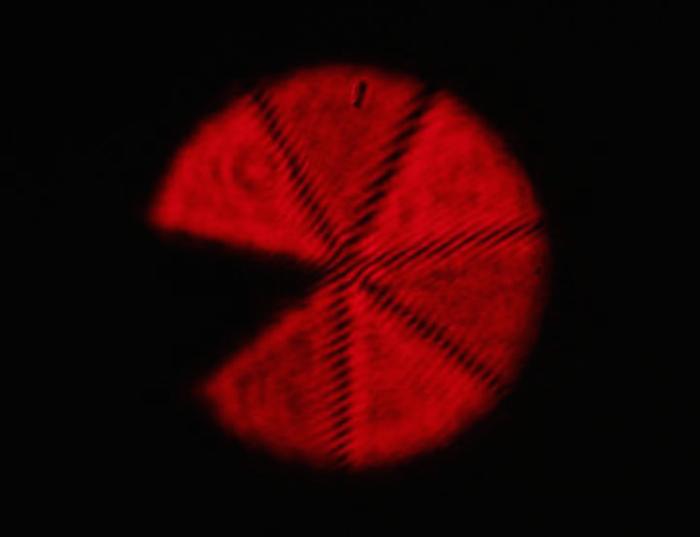 To characterize twisted light the researchers looked at the images produced by the interference of a structured laser beam with a replica of that beam rotated by a given angle, including this "Pac-Man." Image courtesy Mohammad Mirhosseini

Researchers at the University of Rochester have overcome experimental challenges to demonstrate a new way for getting a full picture of twisted light: characterizing the Wigner distribution.
Twisted light has raised researchers' interest for its potential for quantum communication applications. The discrete nature of one of the defining parameters of twisted light, orbital angular momentum (OAM), makes it attractive for encoding quantum information. There is also no known fundamental limit to the maximum OAM value that can be coded into a photon, which could allow for quicker communication than with other systems.
But before any particular system can be used in quantum communication, researchers need to be able to measure it and describe it. Other methods to obtain the wavefunction, a property that describes a quantum system in full - such as quantum tomography or direct measurements - have been demonstrated in the past. However, in a Physical Review Letters paper published this week, the Rochester researchers state that their technique is particularly "suitable for quantum information applications involving a large number of OAM states."
The Wigner distribution is a mathematical construct that completely describes a system in terms of two conjugate variables, that is two variables linked by Heisenberg's Uncertainty Principle. Mohammad Mirhosseini, a postdoctoral associate in Professor of Optics Robert W. Boyd's group, and his collaborators at the Institute of Optics have now shown how the Wigner distribution can be obtained for twisted light. The work also represents the first characterization of the Wigner distribution that involves a discrete variable, as is the case with OAM.
"Apart from the potential uses in quantum communication, our work might offer a good way for describing atomic systems with quantized levels," said Mirhosseini. "The Wigner distribution of twisted light is a very complete way to understand the system: not only does it tell us about the relation between these two linked variables, but it also tells us about the system's behavior. We showed that the Wigner distribution for twisted light superpositions contains negative values, which reveals wave-like behavior."
Mirhosseini thinks their work could also show a possible path forward for other experiments.
"Measuring time in quantum systems is not as simple as using a watch - it can prove challenging," says Mirhosseini. "The conjugate variable of OAM, angle, is in many ways similar to phase, which is itself similar to time. So perhaps the lessons learned here can be applied, in other experiments, to systems where we need to measure time."
Quelle: SD
Astronomie
« Zum vorherigen Eintrag Zum nächsten Eintrag »
2249 Views
Created with page4