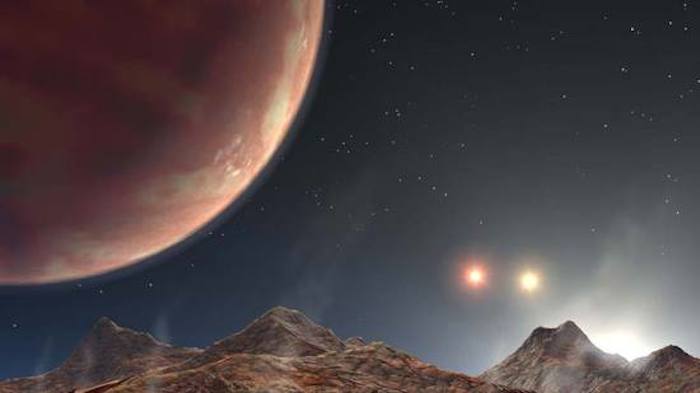 This artist's rendition shows what a sunset might look like from a moon around a planet in a triple-star system. Astronomers say they've found a hot Jupiter in just such a system. Although for the newly discovered KELT-4Ab, the two most distant "suns" would look like little more than stars.  (NASA/JPL-Caltech)

Tatooine’s double sunset just got outshone. Astronomers studying a distant gas giant have found that the planet’s star system contains not one, not two, but three stars.
The planet KELT-4Ab, described in the Astronomical Journal, could help shed light on the complex dynamics of these multi-star systems – and particularly on the mysteries of planetary migration.
The KELT-4 system lies about 685 light-years away in the constellation Leo and, before the planet was found, had been thought to host only two stars. But now, thanks to new observations by the Kilodegree Extremely Little Telescope and several other telescopes, astronomers have found that the distant star is actually a binary -- made of not one but two stars.
This triple system is a binary within a binary, said lead author Jason Eastman, an astronomer at the Harvard-Smithsonian Center for Astrophysics. And it’s only the third known transiting planet in what’s known as a “hierarchical triple stellar system.” (The first were WASP-12b and HAT-P-8b; KELT-4Ab is the brightest of the three, and thus ripe for follow-up.)
“This is a particularly bright and nearby example of such a system and it’s one of few that are known,” Eastman said. “So that makes it particularly interesting.”
Kelt-4A is roughly 1.2 solar masses, and the two others have roughly half that, about 0.65 solar masses apiece, Eastman said. At 328 astronomical units (or 328 Earth-sun distances) away from Kelt-4A, the binary pair takes about 4,000 years to circle the larger star but only 30 years or so to circle each other.
The planet KELT-4Ab, which has a radius about 1.7 times that of Jupiter, sits so close to its host star that it completes its full "year" in just three Earth days. If you were to stand on the planet’s surface (which you cannot, because it’s a gas giant), the star would appear about 40 times larger than the sun looks to us on Earth.
The two other stars, by comparison, look like point sources, just like any other stars -- but are close enough to the planet that they each shine about as much light as the full moon would on an Earthly night.
“They’d just be really, really bright,” Eastman said. “You’d actually see a shadow from this extremely bright pinpoint of light in the sky.”
Because it sits so close to its host star, KELT-4Ab’s atmosphere is highly inflated – more so than scientists expected, Eastman said. Studying its unusual properties might help researchers better understand how planetary atmospheres behave in extreme environments.
Hot Jupiters have generally puzzled astronomers ever since the broiled gas giants started popping up in planetary surveys, because dynamically they don’t make sense. Gas giant planets are expected to form far away from their star – as Jupiter and Saturn did.
“Before we discovered them, we had no idea that they would exist,” Eastman said of hot Jupiters, “and we were still shocked to find them because they’re supposed to form where our own Jupiter is and then just stay there.”
Researchers currently think hot Jupiters were actually once "cold Jupiters" – that is, they formed at a great distance but somehow migrated in toward the center of the stellar system.
“That process of migration is not really well understood,” the astronomer added.
But in the KELT-4 system, the gravitational perturbations from those two distant, twirling stars might help explain why KELT-4Ab has ended up in such a hot spot.
Quelle: Los Angeles Times
Astronomie
« Zum vorherigen Eintrag Zum nächsten Eintrag »
2721 Views
Created with page4