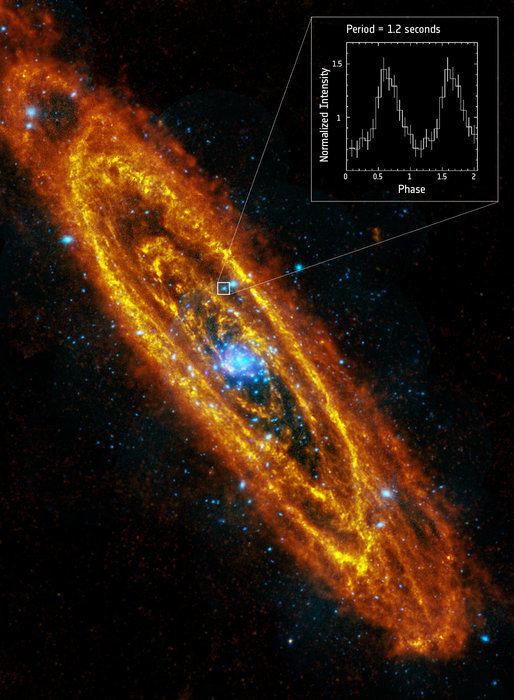 Decades of searching in the Milky Way’s nearby ‘twin’ galaxy Andromeda have finally paid off, with the discovery of an elusive breed of stellar corpse, a neutron star, by ESA’s XMM-Newton space telescope.
Andromeda, or M31, is a popular target among astronomers. Under clear, dark skies it is even visible to the naked eye. Its proximity and similarity in structure to our own spiral galaxy, the Milky Way, make it an important natural laboratory for astronomers. It has been extensively studied for decades by telescopes covering the whole electromagnetic spectrum.
Despite being extremely well studied, one particular class of object had never been detected: spinning neutron stars.
Neutron stars are the small and extraordinarily dense remains of a once-massive star that exploded as a powerful supernova at the end of its natural life. They often spin very rapidly and can sweep regular pulses of radiation towards Earth, like a lighthouse beacon appearing to flash on and off as it rotates.
These ‘pulsars’ can be found in stellar couples, with the neutron star cannibalising its neighbour. This can lead to the neutron star spinning faster, and to pulses of high-energy X-rays from hot gas being funnelled down magnetic fields on to the neutron star.
Binary systems hosting a neutron star like this are quite common in our own Galaxy, but regular signals from such a pairing had never before been seen in Andromeda.
Now, astronomers systematically searching through the archives of data from XMM-Newton X-ray telescope have uncovered the signal of an unusual source fitting the bill of a fast-spinning neutron star.
It spins every 1.2 seconds, and appears to be feeding on a neighbouring star that orbits it every 1.3 days.
“We were expecting to detect periodic signals among the brightest X-ray objects in Andromeda, in line with what we already found during the 1960s and 1970s in our own Galaxy,” says Gian Luca Israel, from INAF-Osservatorio Astronomica di Roma, Italy, one of the authors of the paper describing the results, “But persistent, bright X-ray pulsars like this are still somewhat peculiar, so it was not completely a sure thing we would find one in Andromeda.
“We looked through archival data of Andromeda spanning 2000–13, but it wasn’t until 2015 that we were finally able to identify this object in the galaxy’s outer spiral in just two of the 35 measurements.”
While the precise nature of the system remains unclear, the data imply that it is unusual and exotic.
. 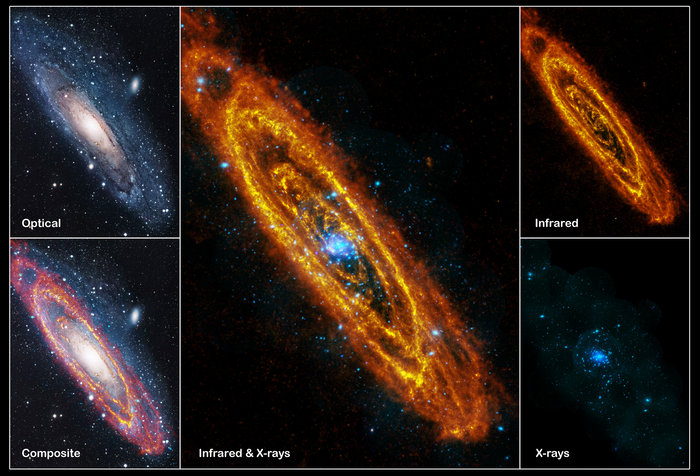 The Andromeda Galaxy is our nearest large galactic neighbour, containing several hundred billion stars. Combined, these images show all stages of the stellar life cycle. The infrared image from Herschel shows areas of cool dust that trace reservoirs of gas in which forming stars are embedded. The optical image shows adult stars. XMM-Newton’s X-ray image shows the violent endpoints of stellar evolution, in which individual stars explode or pairs of stars pull each other to pieces.
. 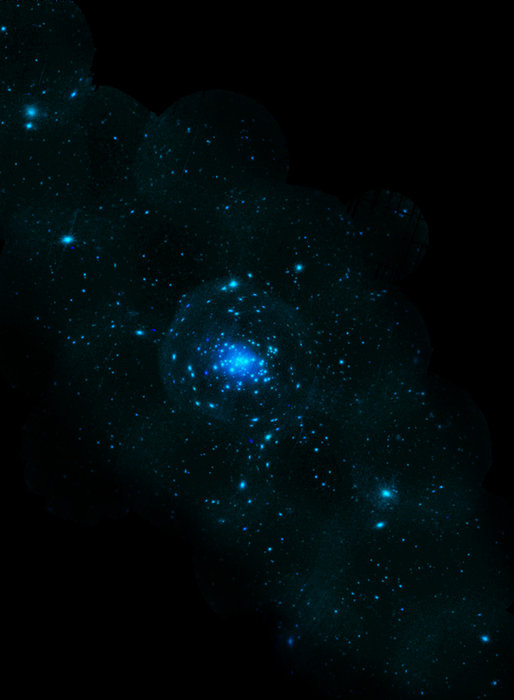 This image of the Andromeda Galaxy was taken by XMM-Newton during Christmas 2010. It shows hundreds of X-ray sources within Andromeda, many of them clustered around the centre, where the stars are densest. Each one is a dying star system. The sources can be shockwaves and debris rolling through space from exploded stars or pairs of stars locked in a gravitational fight to the death, in which one strips the other of precious gas.
Quelle: ESA
Astronomie
1930 Views
Created with page4