On 14 March, the ExoMars Trace Gas Orbiter and Schiaparelli lander were lofted into orbit by a Proton rocket from Baikonur in Kazakhstan, starting a seven-month journey to the Red Planet.
Following separation from the final stage at 20:13 GMT (21:13 CET), the craft left on a trajectory pointing to where Mars will be in October, travelling at 33 001 km/h with respect to Earth.
For asteroid hunters, ExoMars offers a perfect target because its departure mimicks, in reverse, the approach of a small near-Earth object, or NEO. These include rocky asteroids formed between the orbits of Mars and Jupiter which head towards Earth every so often.
For the ExoMars launch, ESA’s NEO coordination centre in Italy organised an international campaign for ground-based optical observations of the departing spacecraft.
Quick imaging of a rapidly moving object whose location is only approximately known in a short time window is akin to what would happen if an asteroid were discovered on an imminent impact trajectory with Earth.
The predicted path of ExoMars provided by ESA’s Space Debris Office in the Agency’s operations centre in Darmstadt, Germany – home to ExoMars mission control – was converted by the NEO centre into pointing information for telescopes.
This information was then shared widely with ESA’s network of collaborating observatories in the southern hemisphere, from where ExoMars was observable. Excellent images were acquired by Alison Tripp and Sarah Roberts using a 1 m-diameter telescope in Australia, and by Grant Christie at the Stardome Observatory in Auckland, New Zealand.
The most remarkable images, however, were acquired just before midnight local time by the Observatório Astronômico do Sertão de Itaparica team in Brazil led by Daniela Lazzaro, with Sergio Silva at the telescope.
In their images, the spacecraft appears as a bright object surrounded by at least six other fainter spots – elements of Proton’s discarded upper stage – moving together in the sky (see red arrows in annotated version below).
. 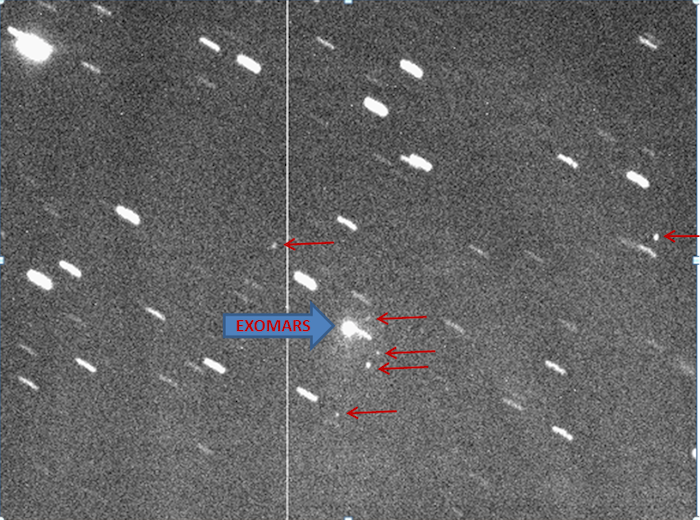