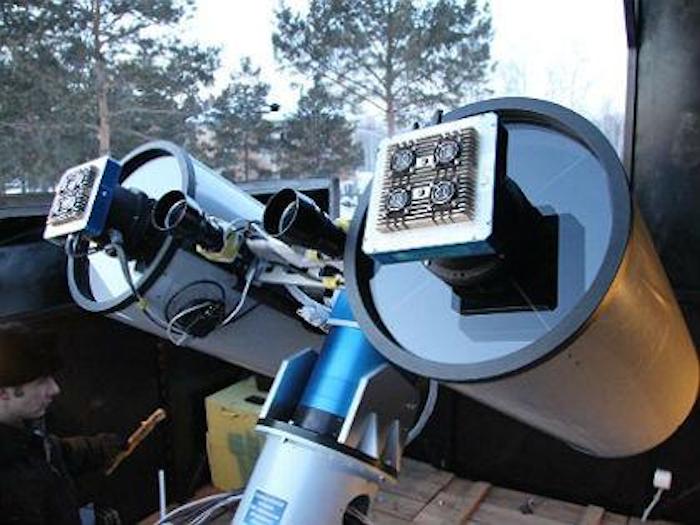 The Lomonosov Moscow State University astronomers who created a global network of robotelescopes MASTER detected that a bright star TYC 2505-672-1 has actually faded significantly. That finding induced new questions: so, the scientists assume that TYC 2505-672-1 is actually a double star system, though a nature of its companion remains unknown. The article was accepted to publication in Astronomy & Astrophysics, and is accessible as a pre-print at http://arxiv.org/abs/1602.06010
Three years ago a team of Russian scientists working with the global MASTER network of robotic telescopes spotted that the giant star in Leo minor with a catalogue number TYC 2505-672-1, which was considered to be extinct, in fact just faded -- its brightness decreased nearly 100 times.
The MASTER network of telescopes was constructed by MSU scientists under a guidance of Prof. Vladimir Lipunov for a purpose of detecting and researching the most energetic flashes in the Universe -- Gamma-ray bursts (a process accompanying formations of black holes and neutron stars), and also thermonuclear flashes on white dwarfs, galactic center flares and quasars. MASTER telescopes already detected more that 1000 flashes in a distance from several hundred to a billion light years away, and spotted a number of potentially dangerous asteroids. The telescopes belonging to the network are located near Blagoveshchensk, Irkutsk, Kislovodsk, in the Ural region, Moscow region, and also in Argentina, Republic of South Africa ans Spain (on the Canary islands).
Initially the discovery concerning the star's fading did not seem significant: phenomena of that kind may sometimes take place. However the question, why did the star become that dim, remained not answered. Diverge hypotheses were suggested, among which the most likely one seemed the idea that a red giant following its evolutionary processes emitted a cloud of stardust consisting of carbon particles and 'hid' itself from view.
Though, the later photometric measurements by MASTER-Amur and spectral measurements by the 6-metre BTA-6 telescope showed that the star did not turn red, as, for example, the Sun does before sunset (this happens because it takes longer for the sun rays to pierce the atmosphere). For that reason the star was tracked attentively, and soon it started to restore its luminosity. In October 2014 it recovered its normal shine level completely.
At approximately the same time Rolf Yansen, Dutch astronomer (Arizona university) draw attention to the star. He revised that data of Harvard observatory picture library, publicly available since June 2014, and suddenly detected that in 1942-1945 TYC 2505-672-1 underwent the same decrease in luminosity. According to the scientist's calculations, the star has an unprecedented variation period of 25245 days, which is about 69 years.
This fact means that a common star became a record-breaker in a length of variation period, absolutely out of a reach. According to Denis Denisenko, one of the discovery's authors, the longest known variation period used to belong to Epsilon Aurigae. Its eclipses repeat in 9890 days, which is a bit more than 27 years. Only five stars are known to have a period of more than ten years. In other words, the new variable star exceeds the existing record more than two and a half times.
'Ironically, the project MASTER, initially intended for observing fast happening phenomena, such as for example the consequences of the Gamma-ray bursts and star flashes, discovered an unprecedented variability of a totally different scale,' comments Denis Denisenko.
Professor Vladimir Lipunov who leads the MASTER team, the main initiator and creator of this global network of robotelescopes, prognoses a quick and wide popularity to the new record-breaker from Leo minor.
'If you try to count the number of links to Epsilon Aurigae, you find thousands of mentions,' he says. 'Despite the fact, that the difference between the maximal and minimal luminosity is measured by tens of percents, and now it is nearly a hundred times! The main similarity of the two star is that the reasons why they change their brightness remain absolutely mysterious.'
Scientists assume, that the star is actually a double system, though the nature of its companion by now allows only various guesses.
'The scale of the new object is already impressive,' tells Denis Denisenko. 'Giant stars of such spectral class are about three and a half times heavier than the Sun. Taking into account the second component, the mass of the system should be around at least four solar masses. Orbital radius of such star should be about 33 astronomical units, the orbital length should then exceed two hundred astronomical units.'
'The system is more than mysterious,' Vladimir Lipunov agrees. 'We actually see a total eclipse. That means that something totally occults the giant star. Hence the disc around the second, unseen companion, should be absolutely opaque. But what shines with the same spectrum during the eclipse then? That does not seem to be a stardust disc, though, it can not be another star. If the luminosity of the companion is one hundred times lower, then, the companion is a low-mass star. But a low-mass star can not have the size exceeding the size of a more massive companion in that double system, and would it be smaller, the eclipse would not take place at all, as you can not hide a larger object behind a smaller one.'
Quelle: AAAS
Astronomie
« Zum vorherigen Eintrag Zum nächsten Eintrag »
2206 Views
Created with page4