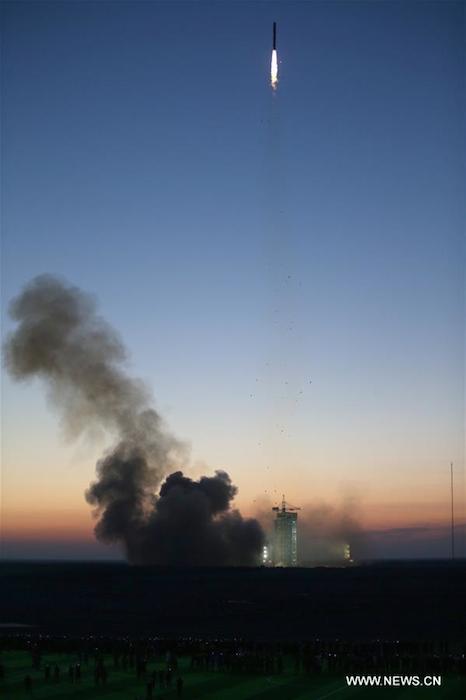 A Long March 2-D rocket carrying the Dark Matter Particle Explorer Satellite blasts off at the Jiuquan Satellite Launch Center in Jiuquan, northwest China's Gansu Province, Dec. 17, 2015. The satellite, nicknamed "Wukong" after the Monkey King with penetrating eyes in the Chinese classical fiction "Pilgrimage to the West", is the country's first space telescope in a fresh search for smoking-gun signals of dark matter, invisible material that scientists say makes up most of the universe's mass. 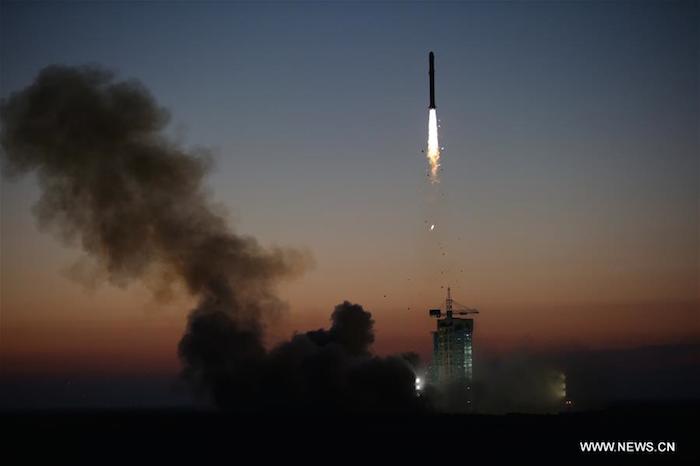 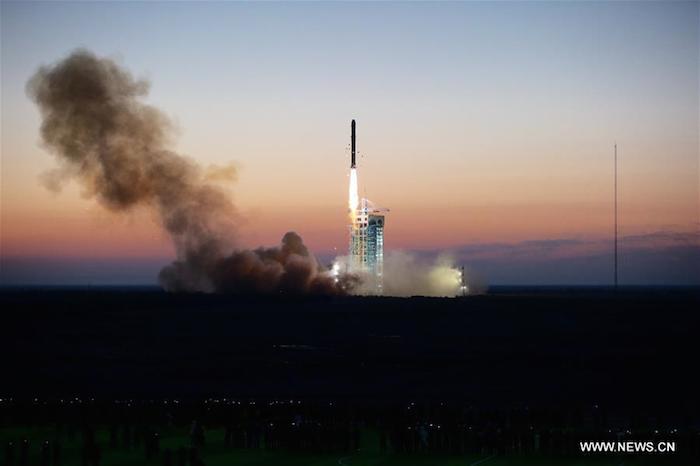 China launches satellite to shed light on mysterious dark matter
.
JIUQUAN, Gansu, Dec. 17 China on Thursday sent into space the country's first space telescope in a fresh search for smoking-gun signals of dark matter, invisible material that scientists say makes up most of the universe's mass.
The Dark Matter Particle Explorer (DAMPE) Satellite, nicknamed "Wukong" after the Monkey King with penetrating eyes in the Chinese classical fiction Journey to the West, was blasted off Thursday morning on a Long March 2-D rocket from the Jiuquan Satellite Launch Center.
It will enter a sun-synchronous orbit at a height of 500 kilometers to observe the direction, energy and electric charge of high-energy particles in space.
Quelle: Xinhua
.
Chinese Long March 2D lofts DAMPE – A Dark Matter Investigator
A new satellite – that will help humanity to unravel the mysteries of the ‘Dark Matter’ – was launched on Thursday by China. The launch of the DAMPE satellite took place at 00:12 UTC using a Long March-2D launch vehicle from the 603 Launch Pad at the Jiuquan Satellite Launch Center’s LC43.
Chinese Launch:
DAMPE (DArk Matter Particle Explore) is one of the five satellite missions in the framework of the Strategic Pioneer Research Program in Space Science of the Chinese Academy of Sciences (CAS).
Other missions include: Hard X-ray Modulation Telescope, Quantum Experiments at Space Scale, Shijian-10, Intensive Study of Future Space Science Missions and Advanced Research of Space Science Missions and Payloads.
The new satellite will be operational at a sun-synchronous orbit with an altitude of 500 kilometers and an inclination of 97.4° with 3-year lifetime.
DAMPE is a powerful space telescope for high energy gamma-ray, electron and cosmic rays detection.
It consists of a double layer of plastic scintillator strips detector (PSD) that serves as anti-coincidence detector, followed by silicon-tungsten tracker-converter (STK), which is made of 6 tracking double layers; each consists of two layers of single-sided silicon strip detectors measuring the two orthogonal views perpendicular to the pointing direction of the apparatus.
Three layers of Tungsten plates with a thickness of 1mm are inserted in front of tracking layer 2, 3 and 4 for photon conversion.
The STK is followed by an imaging calorimeter of about 31 radiation lengths thickness, made up of 14 layers of Bismuth Germanium Oxide (BGO) bars in a hodoscopic arrangement. A layer of neutron detectors is added to the bottom of the calorimeter. The total thickness of the Bismuth Germanium Oxide calorimeter (BGO) and the STK correspond to about 33 radiation lengths, making it the deepest calorimeter ever used in space.
Finally, in order to detect delayed neutron resulting from hadron shower and to improve the electron/proton separation power a neutron detector (NUD) is placed just below the calorimeter. The NUD consists of 16, 1 cm thick, boron-doped plastic scintillator plates of 19.5 × 19.5 cm2 large, each read out by a photomultiplier.
The main scientific objective of DAMPE is to measure electrons and photons with much higher energy resolution and energy reach than achievable with existing space experiments in order to identify possible Dark Matter signatures.
It has also great potential in advancing the understanding of the origin and propagation mechanism of high energy cosmic rays, as well as in new discoveries in high energy gamma astronomy.
Scientific objectives of the mission are the search and study of dark matter particles by conducting high-resolution observation of high-energy electron and gamma ray; the study the origin of cosmic rays by observing the high energy electron and heavy nuclei above TeV; and the study of the propagation and acceleration mechanism of cosmic ray by observing high-energy gamma ray.
DAMPE will have unprecedented sensitivity and energy reach for electrons, photons and cosmic rays (proton and heavy ions). For electrons and photons, the detection range is 5 GeV – 10 TeV, with an energy resolution of about 1% at 800 GeV. For cosmic rays, the detection range is 100 GeV – 100 TeV, with an energy resolution better than 40% at 800 GeV. The geometrical factor is about 0.3 m 2 sr for electrons and photons, and about 0.2 m2 sr for cosmic rays. The angular resolution is 0.1° at 100 GeV.
The total weight of the payload is of 1400 kg and its power consumption is of 400 W. The total weight of the satellite is of 1900 kg.
Instruments on DAMPE:
The plastic scintillator strips detector (PSD) consists of one double layer (one x and one y) of scintillating strips detector made of scintillating strips of 1.0 cm thick, 2.8 cm wide and 82.0 cm long. The strips are staggered by 0.8 cm in a layer, thus fully covers an area of 82.0 cm by 82.0 cm.
The PSD serves as an anti-coincidence detector for photon identification, as well as charge detector for cosmic rays. The design specification is a position resolution of 6 mm, and a charge resolution of 0.25 for Z = 1 to 20.
. 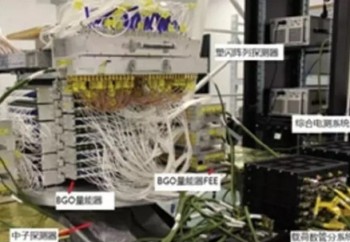 China receives message from dark matter probe
BEIJING, Ground stations in China have received data sent by "Wukong" -- the country's first dark matter probe satellite, scientists announced Monday.
A station in Kashgar in northwest China's Xinjiang successfully tracked and received data from the Dark Matter Particle Explorer (DAMPE) Satellite at 8:45 a.m. on Sunday. It took about seven minutes to receive and record the information, and the data was transferred to the National Space Science Center, according to a Chinese Academy of Sciences (CAS) statement.
The communication marks the establishment of a transmission link between the satellite and ground-based stations.
Stations in Beijing's Miyun and Sanya in south China's Hainan Province also tracked and received data from the satellite later on Sunday.
Scientists examined the data and believe it to be in the "correct format and of good quality," CAS said.
China on Thursday sent the country's first space telescope into space in a fresh search for signals of dark matter, invisible material that scientists say makes up most of the universe's mass.
The satellite was given the moniker "Wukong" after the Monkey King from the Chinese classical fiction "Journey to the West."
The satellite is designed to undertake a three-year space mission, but scientists hope it could last five.
Quelle: Xinhua
-
Update: 18.03.2016
.
China's dark-matter satellite concludes in-orbit testing
-
BEIJING, China's first dark-matter detection satellite has completed three months of in-orbit testing, with initial findings expected to appear before the end of the year, according to the Chinese Academy of Sciences (CAS).
Dark Matter Particle Explorer (DAMPE) Satellite "Wukong" detected 460 million high energy particles in a 92-day flight, sending about 2.4 TB of raw data back to Earth, DAMPE chief scientist Chang Jin said.
Launched on Dec. 17, 2015 on a Long March 2-D rocket, "Wukong" was handed over to the CAS Purple Mountain Observatory on Thursday.
The four major parts of the payload - a plastic scintillator array detector, a silicon array detector, a BGO calorimeter, and a neutron detector - functioned satisfactorily. The satellite completed all set tests, with all its technical indicators reaching or exceeding expectations.
"Wukong" is designed for a three-year mission. It will scan space nonstop in all directions in the first two years and then focus on areas where dark matter is most likely to be observed in the third.
The CAS on Thursday released a report on the future of space science promising "major progress and breakthroughs" by 2030 in research into the formation and evolution of the universe and the search for extraterrestrial life.
It will also strive to find new physical laws that supplant current basic theories.
The goals will be achieved by manned and unmanned programs, including a black hole probe, a Mars probe and extraterrestrial life exploration.
Chinese lawmakers on Wednesday approved the country's economic and social development blueprint for the 2016-2020 period, including research on the origins of the universe and life.
Quelle: Xinhua