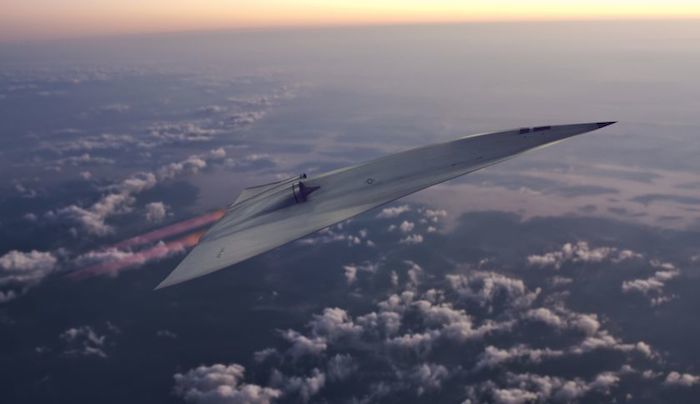 On Tuesday, defense giant Lockheed Martin announced it has made major technological breakthroughs that could lead to the development of a hypersonic aircraft capable of flying six times the speed of sound.
Last August, Airbus filed a patent for a passenger jet that travels at speeds of Mach 4.5, or 4.5 times the speed of sound. Powered by onboard hydrogen, the concept plane would use a rocket engine to propel itself into the upper atmosphere before leveling off to a cruising speed of 3,000 miles per hour.
Aerospace company Lockheed Martin is developing an even faster military jet. Speaking to reporters, Lockheed's chief executive Marillyn Hewson said that her company was on the verge of a major breakthrough.
"We are now producing a controllable, low-drag, aerodynamic configuration capable of stable operations from takeoff to subsonic, transonic, supersonic and hypersonic, to Mach 6," she claimed.
"We're proving a hypersonic aircraft can be produced at an affordable price. We estimate it will cost less than $1 billion to develop, build, and fly a demonstrator aircraft the size of an F-22."
The key problem facing hypersonic aircraft is making a stable "scramjet" engine, which funnels oxygen from outside air to power the aircraft. Lockheed claims to have found a solution, though Hewson didn't go into specifics.
Other breakthroughs include new thermal protection systems, key for defending against friction at high speeds, as well as innovative aerodynamic shapes, navigation control improvements, and long-range communication capabilities.
While the first consideration for the Pentagon is military applications, Hewson said that the technology could ultimately apply to civilian use.
"The technology could also enable hypersonic passenger flights, and, even easier, access to space," she said. "I am confident that Lockheed Martin has the technical expertise to make it happen."
The defense contractor plans to develop its aircraft throughout the 2020s, with hypersonic planes ready to enter service in the 2030s.
"We actually feel that we've made substantial progress in all the technologies associated with hypersonics," said Rob Weiss, executive vice president of Lockheed arm Skunkworks, according to Defense News.
"There's a number of challenges in the technologies, the propulsion, the materials that have to deal with the high temperatures, and we're at a point now where those technologies are mature, and therefore we feel very confident that we can field and successfully fly a hypersonic vehicle."
Still, Lockheed may be far behind Chinese defense companies. Last November, Beijing conducted its sixth test flight of the DF-ZF, a hypersonic glide vehicle.
"The DF-ZF is an ultra-high-speed missile allegedly capable of penetrating US air defense systems based on interceptor missiles," Bill Gertz wrote for the Washington Free Beacon.
"The DF-ZF was tracked by US intelligence agencies and flew at speeds beyond Mach 5, or five times the speed of sound."
Quelle: SD
-

Program could transform global strategic balance
Lockheed Martin Corp  LMT 0.53%  is on the verge of a major breakthrough in making a warplane that can fly at six times the speed of sound, Chief Executive Officer Marillyn Hewson said on Tuesday.
Speaking to reporters at the Lockheed‘s annual media day, Hewson said the company had already made progress on hypersonic programs and was producing an “aerodynamic configuration” which could reach Mach 6, or six times the speed of sound–enabling it to respond to security threats much more quickly than current fighter jets.
The U.S. Defense Department has said it wants to build what it calls a “prompt global strike” capability that would enable it to hit targets worldwide within an hour with conventional or nuclear warheads.
According to a report published by the Mitchell Institute for Aerospace Studies earlier this year, hypersonics had the potential to revolutionize the military much like stealth fighters did a generation ago.
“By fundamentally redefining the technical means of power projection, the U.S. can circumvent challenges facing the present force,” the report said.
Hewson said that Lockheed could develop and build a hypersonic demonstrator aircraft the size of a F-22 stealth fighter for less than $1 billion.
Orlando Carvalho, who heads Lockheed‘s Aeronautics division, said the government’s current plan was to produce a hypersonic weapon and field that before moving to develop and field a hypersonic aircraft.
In 2013, Lockheed unveiled plans for a hypersonic spy plane called the SR-72 that could fly at Mach 6, twice as fast as its famed SR-71 Blackbird, and said a missile demonstrating the new technology could fly as early as 2018.
Carvalho said the United States could realistically create a hypersonic weapon in the 2020s, but it would likely take until the 2030s to produce a hypersonic aircraft like the SR-72.
Separately, CEO Hewson said she has “no regrets” about buying helicopter maker Sikorsky for $9 billion in November, even though sliding oil prices have taken a bigger bite than expected from its commercial helicopter sales as energy companies have slashed spending.
Hewson said buying Sikorsky from United Technologies Corp  UTX 1.25%  was “absolutely a great opportunity” and Lockheed remained confident about its long-term prospects and said she expected oil prices to recover over the longer term.
Some analysts and industry executives have said Lockheed overpaid for the storied maker of the Black Hawk and Sea Stallion, underestimating the scale of the troubles faced by the oil and gas industry.
Lockheed Chief Financial Officer Bruce Tanner told Reuters in an interview that Sikorsky would generate more cash in future as it moves ahead on several U.S. military development programs, including a new presidential helicopter program.
“We did not buy this business for the next three years; we bought it for the next three decades,” Tanner said.
Quelle: Fortune
Luftfahrt
« Zum vorherigen Eintrag Zum nächsten Eintrag »
2150 Views
Created with page4