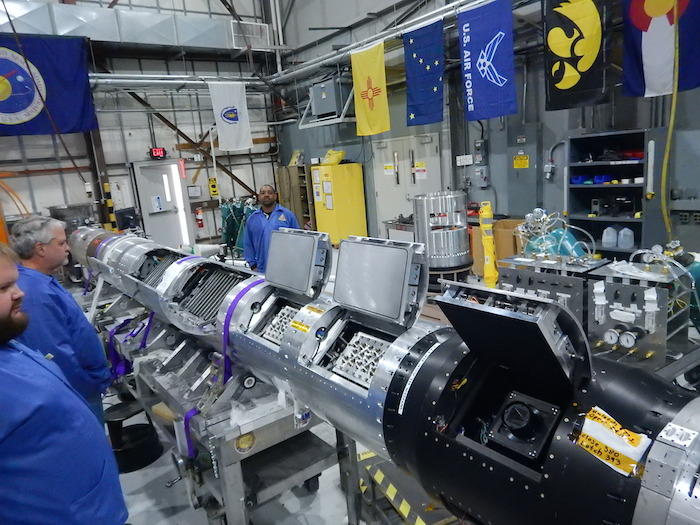 NASA's first wide-field soft X-ray camera, which incorporated a never-before-flown focusing technology when it debuted in late 2012, is a gift that keeps giving.
NASA recently selected a miniaturized version of the original X-ray camera to fly as a CubeSat mission to study Earth's magnetic cusps - regions in the magnetic cocoon around our planet near the poles where the magnetic field lines dip down toward the ground. The CubeSat will observe the cusps via soft X-rays emitted when the million-mile-an-hour flow of solar particles constantly streaming from the sun, called the solar wind, collides with and exchanges charges with atoms in the uppermost region of Earth's atmosphere and neutral gases in interplanetary space.
The bread loaf-size instrument is the latest incarnation of the Sheath Transport Observer for the Redistribution of Mass, or STORM. Funded by NASA's Heliophysics Technology and Instrument Development for Science, or H-TIDeS program, this new version of the instrument is being developed as WASP/CuPID, short for Wide Angle Soft x-ray Planetary camera and the Cusp Plasma Imaging Detector. The mission is expected to launch in 2019.
STORM Evolves into CuPID/WASP
Three years ago, a team of three NASA scientists at NASA's Goddard Space Flight Center in Greenbelt, Maryland, demonstrated STORM aboard a Black Brant IX sounding rocket to prove that their concept for studying charge exchange would work. The charge-exchange process happens when the heavy ions in the solar wind steal an electron from the neutrals - an exchange that puts the heavy ions in a short-lived excited state. As they relax, they emit soft X-rays.
The neutrals from which the heavy ions stole the electron are now charged themselves. This allows them to be picked up by the solar wind and carried away. This is one way planets like Mars could lose their atmosphere.
So valuable was the resulting data that the three scientists decided to miniaturize STORM and compete for a CubeSat flight opportunity. Now about half the size of STORM, CuPID/WASP was demonstrated aboard a Black Brant IX sounding rocket in December 2015 and will be further refined under the H-TIDeS funding. Ultimately, it will carry its own avionics system.
"Actually, it was quite a coup," said Michael Collier, a planetary scientist who worked with heliophysicist David Sibeck and astrophysicist Scott Porter to develop all instrument versions. "This imager has applications across many different fields and platforms. We figured we could miniaturize it and put it on a CubeSat and still get good science."
Boston University professor Brian Walsh, a former Goddard post-doctorate student, is serving as the mission's principal investigator.
Three Scientific Disciplines Benefit
Like its predecessor, CuPID/WASP employs what's known as a lobster-eye optic, a thick curved slab of material dotted with tiny tubes across the surface. X-ray light enters these tubes from multiple angles and is focused through reflection, giving the technology a wide field of view necessary for globally imaging the emission of soft X-rays.
Because the instrument is considerably smaller than STORM, its collecting area isn't quite as good. However, the data is just as valuable to scientists, Porter said.
Since its discovery in the mid-1990s, scientists have observed the emission of charge-exchange X-rays from planets, the moon, comets, interplanetary space, possible supernova remnants, and galactic halos.
Planetary scientists have observed these emissions from the outer atmospheres of Venus and Mars, leading some to question whether the charge-exchange phenomenon contributes to the atmospheric loss on Mars.
Heliophysicists studying how near-Earth space is affected by radiation and magnetic energy from the sun also have observed soft X-rays from the outer boundaries of Earth's magnetosphere, the magnetic bubble that shields Earth from hazardous solar storms. And astrophysicists have observed them, too - as unwanted noise in data collected by all X-ray observatories sensitive to soft X-rays.
As a result, planetary scientists and heliophysicists want to measure these emissions for scientific reasons, while astrophysicists want to remove them as noise.
Since the instrument's debut in 2012 and subsequent miniaturization as a CubeSat payload, a European-led team has begun considering developing a STORM-like instrument for its proposed Solar Wind Magnetosphere Ionosphere Link Explorer (SMILE).
"Everyone is interested in getting this data, although for different reasons," Collier added. "These missions span three different disciplines, which is a rare occurrence in space science."
Quelle: SD
Astronomie
2084 Views
Created with page4