No need for hyperdrive: Scientists have released an “expansion pack” for a virtual tour of the universe that you can enjoy from the comfort of your own computer. The latest version of the publicly accessible images of the sky, which can be viewed using an interactive Sky Viewer tool, roughly doubles the size of the searchable universe from the project’s original release in May.
The images for this sky-mapping project, dubbed DECaLS (for Dark Energy Camera Legacy Survey) were taken by the 520-megapixel Dark Energy Survey Camera (DECam).
The scientific aim of DECaLS is to identify a select set of about 40 million galaxies and 2.5 million or more quasars—extremely luminous sources in the distant universe powered by massive black holes—that will be the focus of a ground-breaking project known as the Dark Energy Spectroscopic Instrument (DESI).
.

This screenshot, from an interactive Sky Viewer tool, shows a small region of the sky in the vicinity of the galaxy UGC 10041 imaged by the Dark Energy Camera Legacy Survey (DECaLS). Credit: Dustin Lang/University of Toronto
-
The DESI collaboration, managed at the Department of Energy’s Lawrence Berkeley National Laboratory (Berkeley Lab), is building the new instrument for the Mayall 4-meter telescope at Kitt Peak National Observatory.
DESI will measure the distances to the galaxies identified by the survey, create the largest, most detailed 3-D map of the universe, and provide the most precise measurement of the expansion history of the universe over the last 12 billion years. The project will explore the effects of dark energy, a mysterious force that is causing this expansion to accelerate.
The DECaLS maps of the sky are more than three times deeper than those from a predecessor survey, the Sloan Digital Sky Survey. In addition, DECaLS will map a larger region than the Sloan survey, eventually covering about one-third of the sky. The images can be viewed by the public using the Sky Viewer, built by co-investigator Dustin Lang of University of Toronto.
The viewer allows users to toggle between various views, comparing images or models from the DECaLS data set to images from past surveys of the sky. You can also click to view labels for space objects, including stars and galaxies.
The latest DECaLS Sky Viewer release contains about 370 million stars and galaxies, said Berkeley Lab’s David Schlegel, co-lead investigator for the DECaLS project and project scientist for DESI. Berkeley Lab scientists and engineers created the light-sensitive charge-coupled devices (CCDs) integral to the sensitive, high-resolution images.
“When we finish this we’ll have a few billion objects,” Schlegel said. DECaLS is collecting images in three different visual bands of color, which are featured in Sky Viewer, and in four bands of infrared color. The project will collect data through at least 2018.
“We are running the imaging surveys of the sky as completely public projects,” said Arjun Dey, an astronomer at the National Optical Astronomy Observatory, and co-lead with Schlegel of the DECaLS project. Project data and catalogs are made available to researchers and the public as soon as they are produced. This approach has enabled many groups not involved in the DECaLS project to undertake a broad variety of research projects.
“The Sloan imaging survey saw very few galaxies beyond about 20 percent of the way across the visible universe,” Schlegel said. “For these new DECaLS imaging sets, we are seeing many galaxies about half of the way across the visible universe. We will be mapping 10 times more volume than Sloan did.”
Dey said, “The potential for new discoveries is very exciting.”
.

This animation shows how the Sky Viewer tool can be used to zoom in on objects for a more detailed view. Credit: Dark Energy Camera Legacy Survey
.
As more is learned about objects from observations, it will improve the algorithms used to build a better virtual model of the universe containing simulated galaxies, quasars, stars and other objects. “Ideally, the model will become a perfect representation” that syncs with actual images and helps to identify previously unknown objects,” Schlegel said. “We’re far from there now, but we’re a lot closer than we’ve ever been.”
In parallel to the sky-mapping project is an effort to develop mathematical algorithms to automatically identify the objects in the images.
The DECaLS survey is somewhat unique in placing its data immediately in the public domain. “The raw images are all available. All of the code we’re using is open source,” Schlegel said.
“After all, the resources that enable this project are supported by taxpayers,” Dey said. “The project belongs to them.”
This openness makes possible research by citizen-science projects like Galaxy Zoo, which is using a “wisdom of crowds” approach to scour some of DECaLS’ galaxy data. Tens of thousands of the galaxy images collected by DECaLS are being fed into Galaxy Zoo, which allows members of the public to identify and describe their features. These classifications can ultimately help scientists to sort and analyze galaxies, to understand more about their ages and how they formed, and to develop machine-learning algorithms that train computers to automatically do these characterizations.
The Galaxy Zoo platform imported a first batch of about 30,000 galaxies from DECaLS into its system in September, with an aim to gather about 1.2 million total classifications (40 per galaxy). Galaxy Zoo will import additional sets of galaxies as its users finish up the earlier batch of classifications. Galaxy Zoo also imports galaxy data from other sources, including simulated galaxies generated by computer models.
. 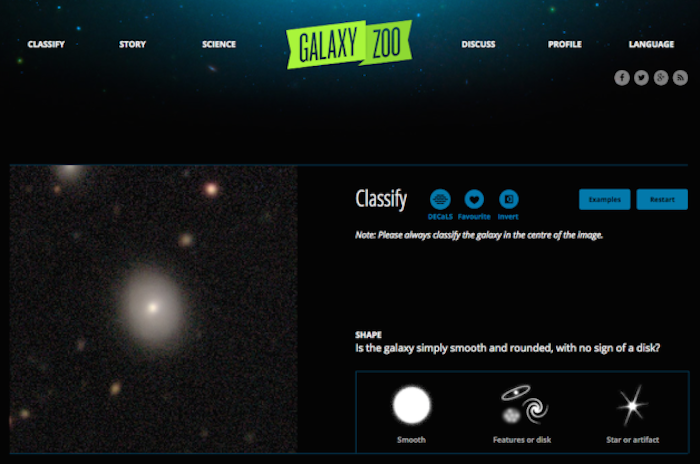 A view of the Galaxy Zoo website. The site offers a citizen-science project that helps to characterize observed and simulated galaxies. Credit: www.galaxyzoo.org
-
“What we’ve always done is tried to get dozens of people to weigh in on each galaxy separately,” said Kyle Willett, lead data scientist for Galaxy Zoo and a research associate at the University of Minnesota. “Our goal for the DECaLS data is to have 40 people look at each galaxy.”
The Sky Viewer tool is hosted by Berkeley Lab’s National Energy Research Scientific Computing Center (NERSC), a DOE Office of Science User Facility.
The DECaLS project was awarded telescope time at the Blanco Telescope at the Cerro-Tololo Inter-American Observatory through the National Optical Astronomical Observatory’s Survey program. The project is an international collaboration, and is partly supported by the DESI project and NOAO. The Dark Energy Camera used for the DECaLS observations was constructed by the Dark Energy Survey Collaboration with support from the U. S. Department of Energy Office of High Energy Physics and the National Science Foundation.
The DESI project is funded, in large part, by the U. S. Department of Energy, Office of Science. The DECaLS project NOAO and Cerro-Tololo Inter-American Observatory are operated by the Association of Universities for Research in Astronomy (AURA) under a cooperative agreement with the National Science Foundation.
###
Lawrence Berkeley National Laboratory addresses the world’s most urgent scientific challenges by advancing sustainable energy, protecting human health, creating new materials, and revealing the origin and fate of the universe. Founded in 1931, Berkeley Lab’s scientific expertise has been recognized with 13 Nobel prizes. The University of California manages Berkeley Lab for the U.S. Department of Energy’s Office of Science. For more, visit http://www.lbl.gov.
DOE’s Office of Science is the single largest supporter of basic research in the physical sciences in the United States, and is working to address some of the most pressing challenges of our time. For more information, please visit science.energy.gov.
Quelle: A U.S. Department of Energy National Laboratory Managed by the University of California
Astronomie weit weg in Internet-Geschwindigkeiten
« Zum vorherigen Eintrag Zum nächsten Eintrag »
2409 Views
Created with page4