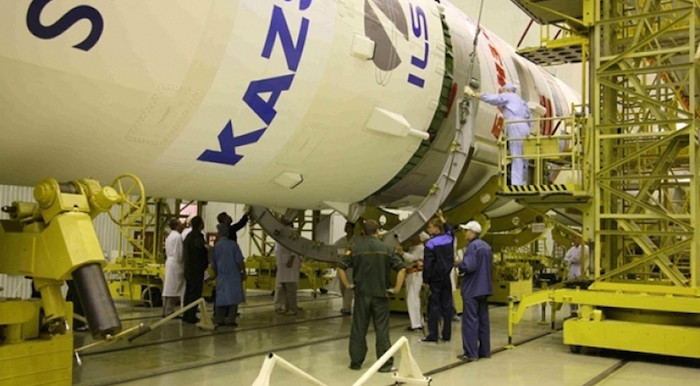 The Air Force’s Joint Space Operations Center said Jan. 20 that it had identified a “possible breakup” of a Russian Breeze-M upper stage, shown above being attached to a satellite. Credit: ILS.
-
WASHINGTON – The U.S. Air Force said Jan. 20 a Russian rocket body in geosynchronous orbit may have broken up and created at least 10 pieces of debris.
The Air Force’s Joint Space Operations Center, or JSpOC, tweeted Jan. 20 that it had identified a “possible breakup” of a Russian Breeze-M upper stage earlier in the day.
In a follow-up tweet Jan. 21, the Air Force said further analysis showed the breakup may have occurred Jan. 15 around 10:50 p.m. California time.
The JSpOC, which is the Defense Department’s nerve center for space operations and tracks space objects from Vandenberg Air Force Base in California, is tracking 10 pieces of debris related to the breakup.
“All associated objects have been added to conjunction assessment screenings, and satellite operators will be notified of close approaches between the debris and active satellites,” the JSpOC said in a statement. “The JSpOC will catalog the debris objects as soon as sufficient data is available.”
Air Force officials are particularly concerned about debris in geosynchronous orbit because space junk there is effectively permanent and because many of the service’s most valuable satellites reside in that orbit, located some 36,000 kilometers above the Earth’s surface.
The rocket body is from an International Launch Services Proton launch from the Baikonur Cosmodrome in Kazakhstan on Dec. 12, 2015. The rocket was used to launch the Garpun 12L military communications satellite.
In an email to SpaceNews, Air Force Capt. Nicholas Mercurio, a spokesman for U.S. Strategic Command’s Joint Functional Component Command for Space, said “Currently no other payloads are affected and the JSpOC will continue monitor the situation and catalog the debris in order to preserve the long-term safety, stability and sustainability of the space environment.”
According to the Air Force,
Brian Weeden, technical adviser at the Secure World Foundation, said because of the rocket body’s location at the time and its proximity to the geostationary belt, fragments from this explosion will be a hazard to satellite operators “for a long time to come.”
“While it’s unlikely the debris objects from this explosion will hit any individual satellite, they do increase the overall debris threat,” he said.
In 2007, another Breeze-M rocket body with nearly a full tank of fuel exploded in a lower orbit after a Proton rocket malfunctioned. That explosion created more than 1,100 pieces of debris .
Quelle: SN
Raumfahrt
« Zum vorherigen Eintrag Zum nächsten Eintrag »
2152 Views
Created with page4