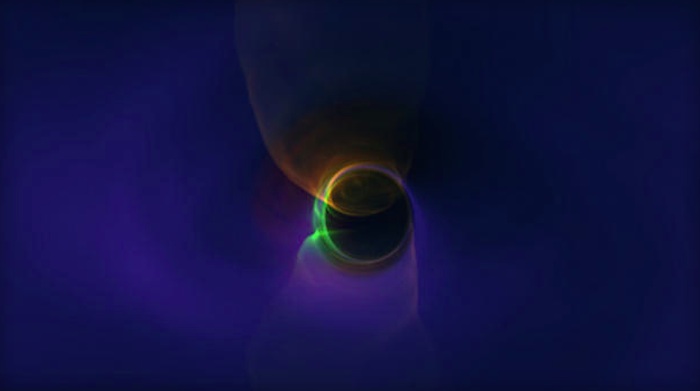 A computer simulation showing what a black hole "shadow," or silhouette, might look like when observed by an array of radio telescopes. Imaging attempts, the first efforts to directly observe the event horizon of a black hole, are expected in 2017.  FERYAL OZEL/UNIVERSITY OF ARIZONA
-
A globe-spanning array of radio telescopes is on track to begin operations in 2017, simultaneously observing light wrapping around and silhouetting a supermassive black hole at the heart of the Milky Way galaxy to produce the first direct view of a hole's mind-bending event horizon, a researcher said Wednesday.
Known collectively as the Event Horizon Telescope, or EHT, the collaborative project is intended to test general relatively at scales never before possible and to provide insights into the strange physics of black holes and how their enormous gravity affects the local space environment.
The primary science goal is imaging the so-called black hole "shadow," or more properly, silhouette, produced by background starlight wrapping around the hole's event horizon from the back, and the absence of light produced by photons on the Earth-facing side of the hole falling into oblivion.
Because of relativistic effects, one side of the "photon ring" is expected to be brighter than the other, giving the silhouette a diamond-ring appearance. In theory, at least.
Feryal Ozel, professor of astronomy and physics at the University of Arizona, told fellow astronomers at the American Astronomical Society's winter meeting in Kissimmee, Fla., that the primary goal of the EHT project is simply proving black hole shadows exist as predicted by the equations of general relativity.
"But of course, it has also a public appeal," she said. "Let me venture a wild guess: one thing that could excite the public almost as much as a Pluto flyby would be to see a picture of a black hole, up close and personal."
Black holes, by definition, do not allow electromagnetic radiation to escape. Anything falling within the hole's so-called event horizons is forever trapped by gravity so strong the escape velocity is greater than that of light.
. 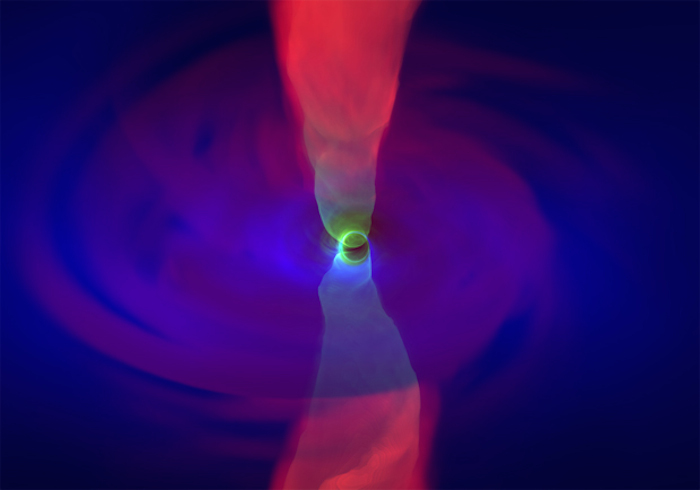 Another computer simulation of light warping around a supermassive black hole. FERYAL OZEL/UNIVERSITY OF ARIZONA
-
But before material falls into a black hole and disappears, it is accelerated to extreme velocities, generating heat and high-energy radiation that is, in fact, visible. And the hole's enormous gravity can have observable effects on the trajectories of nearby stars.
General relativity theory predicts supermassive black holes lurking in the cores of large galaxies, including the Milky Way, also will bend background starlight into a sort of halo, producing a ring of light around a dark void -- the shadow, or silhouette.
If general relativity is correct, the shape of this photon ring should be roughly circular. The EHT will "test general relativity at energy scales and curvature scales that have never been probed before," Ozel said.
But it will not be easy.
The black hole at the core of the Milky Way, known as Sagittarius A*, or Sgr A*, has the mass of about 4 million suns but would fit within Mercury's orbit. It is located some 26,000 light years from Earth.
While Sgr A* is the closest supermassive black hole with the largest apparent size, "we are talking about imaging things that would be the equivalent of a DVD placed on the moon," Ozel said. "If you want to think in angular scales, even the largest black hole in the sky, its shadow size is about 50 micro arcseconds. DVD on the moon."
To detect the black hole shadow, astronomers need the equivalent of a truly gargantuan telescope.
"Nobody is going to give us the funding to build an Earth-size telescope," Ozel joked. "But the next best thing is going to be using many telescopes in an interferometric mode so that we can fool physics in some ways and achieve the angular resolution that is necessary to get to those scales."
By making simultaneous observations with nine or more radio telescopes around the world, astronomers can use the principles of very long baseline interferometry -- VLBI -- to obtain the required resolution.
"Millimeter VLBI is extremely challenging because as the wavelength becomes shorter, as the frequency gets higher, extremely precise time tagging is required in order to resolve the wavefronts," Ozel said.
"The amount of data that needs to be recorded becomes that much higher. What we're talking about is roughly 64 gigabytes per second of observation. Which means on a typical observation, we're talking about hundreds of terabytes per telescope."
Ultra-precise atomic clocks will be used to precisely time the observations at each site and the enormous troves of data be stored on special hard drives. After observations, the drives from all the telescopes will be flown to a central computer facility for analysis, taking into account Earth's rotation, the timing of the observations and the location of each site to construct an image.
The EHT project plans to observe at least 10 supermassive black holes, including Sgr A* at the core of the Milky Way, and M-87, a giant elliptical galaxy 53 million light years away that hosts a six-billion-solar-mass black hole.
"Early 2017 will be the first full-array observations," Ozel said. "We are hoping to beat Pluto to the cover of magazines at that point! More importantly, we are really going to be able to see if GR works ... in predicting black holes and event horizons at the scales that have not been in our reach before."
Quelle: CBS
Astronomie
« Zum vorherigen Eintrag Zum nächsten Eintrag »
2366 Views
Created with page4