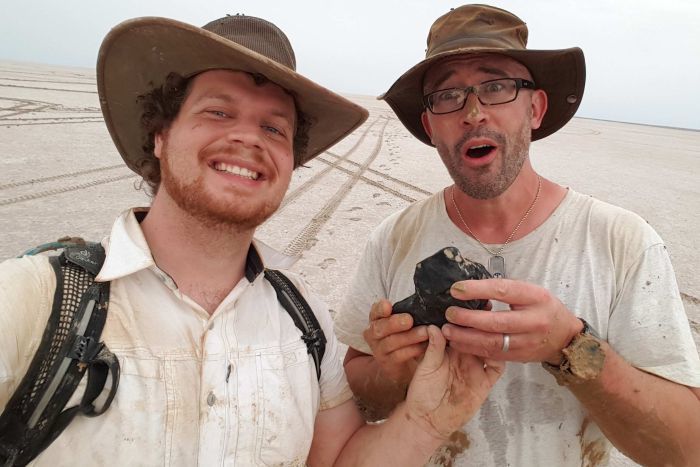 PHOTO: Curtin University researchers Robert Howie and Phil Bland (L to R) showed off the 4.5-billion-year-old meteorite, thought to be a chondrite or stony meteorite. (Supplied: Curtin University, Desert Fireball Network)
.
A meteorite estimated to be 4.5 billion years old has been recovered by Perth researchers from a remote part of Lake Eyre in outback South Australia.
In a race against time, the geologists dug the 1.7 kilogram meteorite out just hours before heavy rains would have wiped away any trace of it.
The team from Curtin University had been trying to track the fall site since the meteorite was spotted by locals and five remote cameras in late November in the William Creek and Marree areas.
But on New Year's Eve, as heavy rains brewed a downpour, the team found their needle in a haystack.
Curtin University team leader Phil Bland hand dug the meteorite from a 42-centimetre-deep hole in a remote section of the lake bed just hours before the arrival of heavy rains would have washed away any remaining clues.
"It was an amazing team effort, we got there by the skin of our teeth," Professor Bland said.
"It is older than the Earth itself. It's the oldest rock you'll ever hold in your hand.
"It came to us from beyond the orbit of Mars, so in between Mars and Jupiter."
The three-day operation to find the meteorite involved an aerial spotter, a drone, two researchers on a quad bike and local Aboriginal guides Dean Stuart and Dave Strangways looking in the sticky clay.
Observations from the air turned out to be critical as the impact site had deteriorated from rain.
A team in Perth was also working around the clock to analyse the incoming data from the search area.
. 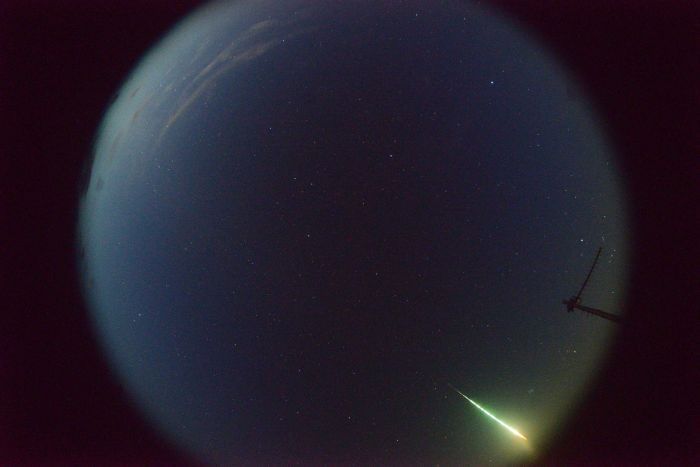 Fireball shows ancient meteorite falling towards Lake Eyre
The meteorite was captured falling towards Lake Eyre by a network of remote cameras that also helped identify its orbit.
.
'It is a big deal': Cameras identify orbit of meteorite
The meteorite is the first result of a new observation network of 32 remote cameras across WA and South Australia.
Called the Desert Fireball Network, the cameras helped to narrow the search area to a 500 metre line.
Mechatronic engineer Jonathan Paxman said the fall site of the meteorite was very difficult to access, being more than six kilometres from a remote part of the lake's edge, and with the surface quite soft in places due to recent rainfall.
"The fact we have managed to retrieve the meteorite at all is remarkable," Dr Paxman said.
The fact we have managed to retrieve the meteorite at all is remarkable.
Jonathan Paxman, mechatronic engineer
Professor Bland said the meteorite was thought to be a chondrite or stony meteorite, providing an example of material created during the early formation of the solar system more than 4.5-billion-years ago.
The meteorite is also one of only 20 worldwide with an identified orbit, allowing the team to track it back to its original asteroid.
"This meteorite is of special significance as the camera observations used to calculate the fall positions have also enabled the solar system orbit of the meteorite to be calculated, giving important contextual information for future study," Professor Bland said.
"It is a big deal because space agencies like NASA or JAXA will spend a billion dollars trying to get to an asteroid and bring a sample back, so potentially we can do it for a lot less than that."
The researchers have asked the local traditional owners, the Arabana people, to name the meteorite in their language after a feature of Kati Thanda-Lake Eyre.
Meanwhile the team has already identified another 10 crash sites to investigate.
. 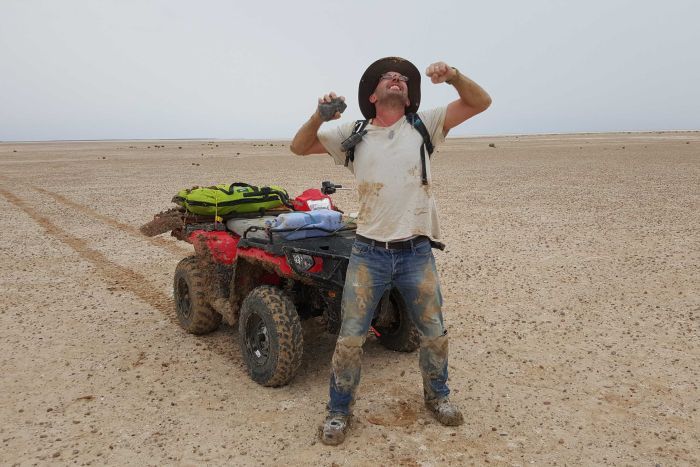