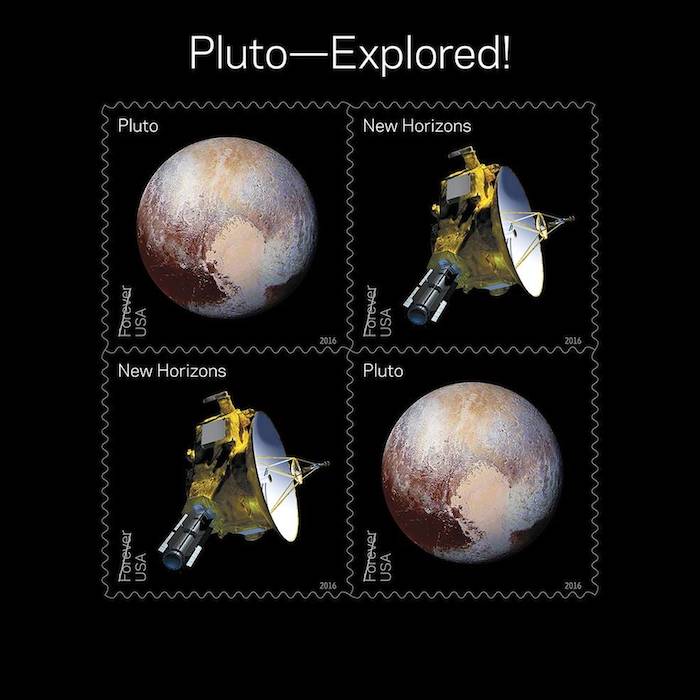 Pluto Explored! In 2006, NASA placed a 29-cent 1991 ‘Pluto: Not Yet Explored’ stamp in the New Horizons spacecraft. In 2015 the spacecraft carried the stamp on its history-making mission to Pluto and beyond. With this stamp, the Postal Service recognizes the first reconnaissance of Pluto in 2015 by NASA’s New Horizon mission. The souvenir sheet of four stamps contains two new stamps appearing twice. The first stamp shows an artists’ rendering of the New Horizons spacecraft and the second shows the spacecraft’s enhanced color image of Pluto taken near closest approach.
Credits: USPS/Antonio Alcalá © 2016 USPS
-
The Postal Service on Wednesday released a preview of its new 2016 stamps, which include an image of Pluto and the New Horizons spacecraft, eight new colorful Forever stamps of NASA images of solar system planets, a Global Forever stamp dedicated to Earth’s moon as well as another postal treat for space fans: a tribute to 50 years of Star Trek.
“U.S. Postal stamps express the enthusiasm and personality of senders to favorite themes in our society. From Mercury to Neptune, Pluto and Star Trek, it’s exciting to see that planetary science and space exploration are being celebrated in these new 2016 stamps,” said John Grunsfeld, NASA’s associate administrator for science in Washington. “On behalf of NASA scientists across the nation, we’re honored that the U.S. Postal Service has chosen to highlight NASA’s New Horizons and 50 years of planetary exploration with these iconic images.”
. 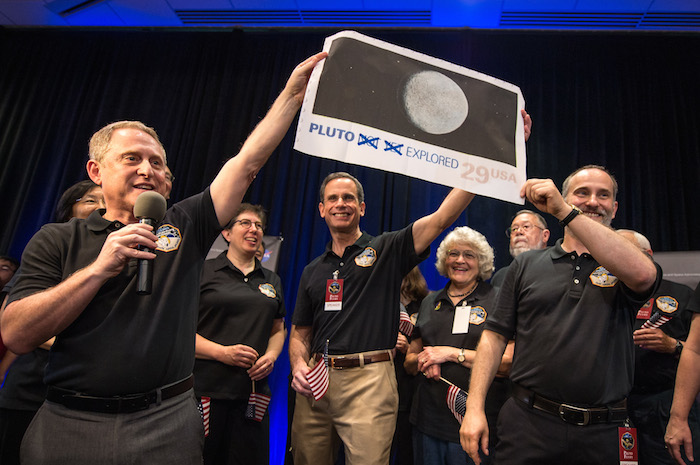 Pluto Explored. (left to right): New Horizons Principal Investigator Alan Stern of Southwest Research Institute (SwRI), Boulder, Colorado; New Horizons’ Deputy Project Scientist Leslie Young, SwRI; Johns Hopkins University Applied Physics Laboratory (APL) Director Ralph Semmel; Annette Tombaugh, daughter of Clyde Tombaugh, who discovered Pluto in 1930; and New Horizons Co-Investigator Will Grundy, Lowell Observatory, Flagstaff, Arizona hold a print of the 1991 Pluto stamp –with their suggested update – on July 14 at APL in Laurel, Maryland.
Credits: NASA/Bill Ingalls
.
The Pluto stamps are of special significance to NASA and the New Horizons team, which placed a 29-cent 1991 “Pluto: Not Yet Explored” stamp on board the spacecraft. On July 14, New Horizons carried the tiny postage stamp on its history-making journey to Pluto and beyond, as members of the mission team celebrated with a large print, striking the words “not yet.”
“The New Horizons project is proud to have such an important honor from the U.S. Postal Service,” said Alan Stern, New Horizons principal investigator from the Southwest Research Institute in Boulder, Colorado. “Since the early 1990s the old, ‘Pluto Not Explored’ stamp served as a rallying cry for many who wanted to mount this historic mission of space exploration. Now that NASA’s New Horizons has accomplished that goal, it’s a wonderful feeling to see these new stamps join others commemorating first explorations of the planets.”
The souvenir sheet of four stamps contains two new stamps appearing twice. The first stamp shows an artist’s rendering of NASA’s New Horizons Pluto flyby spacecraft and the second shows the spacecraft’s enhanced color image of Pluto taken by New Horizons near its closest approach to Pluto.
The view — which is color enhanced to highlight surface texture and composition — is a composite of images from New Horizons Long Range Reconnaissance Imager (LORRI), combined with color data from the imaging instrument Ralph that clearly reveals the now-famous heart-shaped feature stretched across Pluto’s surface; this feature has been named Tombaugh Regio in honor of Pluto’s discoverer, Clyde Tombaugh. Antonio Alcalá of Alexandria, Virginia was the art director for these stamp designs.
“Our stamps articulate the American experience through miniature works of art,” said Acting Stamp Services Director Mary-Anne Penner. “Our diverse stamp topics for 2016 are sure to appeal to everyone, and with the New Year just around the corner, now is a perfect time to get started in stamp collecting. It’s an educational hobby the entire family can enjoy.”
The “Pluto Explored!” stamps will be dedicated in late May of 2016 at the World Stamp Show in New York.
Other space-themed stamps highlighting NASA images of the solar system planets, Earth’s moon, and popular culture in the 2016 collection include:
Views of Our Planets
. 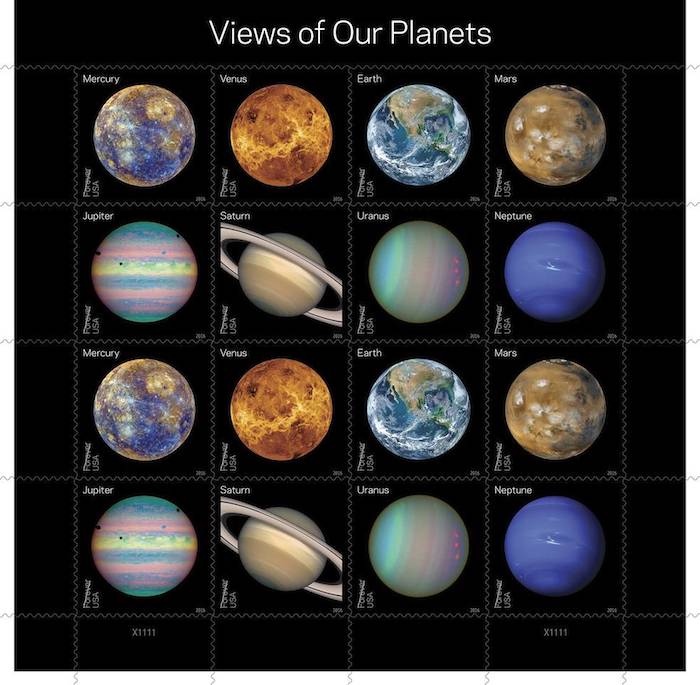 With this pane of 16 Forever stamps, the Postal Service showcases some of the more visually compelling historic, full-disk images of the planets obtained during the last half-century of space exploration. Eight new colorful Forever stamps, each shown twice, feature Mercury, Venus, Earth, Mars, Jupiter, Saturn, Uranus and Neptune. Some show the planets’ “true color” — what one might see if traveling through space. Others use colors to represent and visualize certain features of a planet based in imaging data. Still others use the near-infrared spectrum to show things that cannot be seen by the human eye.
Credits: USPS/Antonio Alcalá © 2016 USPS
The Moon
. 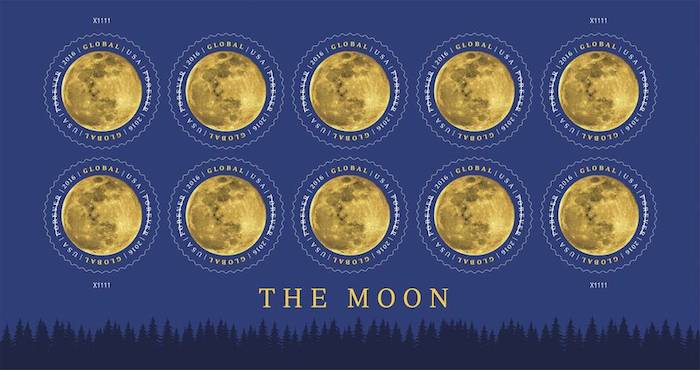 Taken as the full moon rises, the image captures the brilliant surface of Earth’s only natural satellite. Issued at the price of $1.20, this Global Forever stamp can be used to mail a one-ounce letter to any country to which First-Class Mail International service is available.
Credits: USPS/Greg Breeding under the art direction of William Gicker © 2016 USPS
Star Trek
. 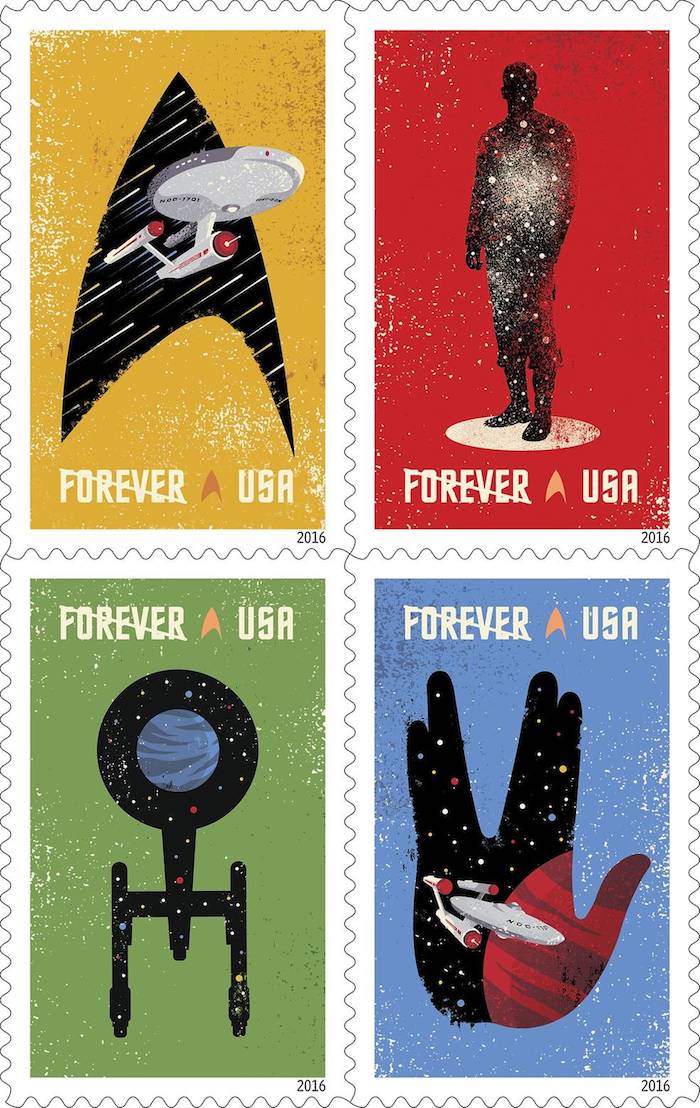 Celebrating the 50th anniversary of the television premiere, the new Star Trek Forever stamps showcase four digital illustrations inspired by the television program: the Starship Enterprise inside the outline of a Starfleet insignia against a gold background, the silhouette of a crewman in a transporter against a red background, the silhouette of the Enterprise from above against a green background, and the Enterprise inside the outline of the Vulcan statue against a blue background. The words “Space…the Final Frontier,” from Captain Kirk’s famous voice-over appear against a background of stars.
Credits: USPS/Heads of State under the art direction of Antonio Alcalá © 2016 USPS
Quelle: NASA
Raumfahrt
« Zum vorherigen Eintrag Zum nächsten Eintrag »
3307 Views
Created with page4