A new breed of giants raises questions about how the biggest galaxies arise
. 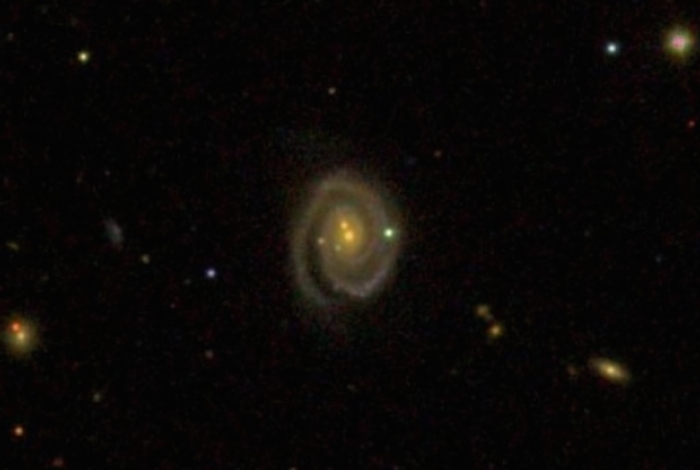 Sporting a double nucleus, the super spiral galaxy CGCG 122-067 in the constellation Leo emits roughly eight times as much visible light as the Milky Way.
Credit: Sloan Digital Sky Survey
-
They're big, they're bright, they're beautiful—and they shouldn't even exist, at least to our current astronomical knowledge: gargantuan spiral galaxies that make our giant Milky Way seem downright modest. Spirals are supposed to be small fry compared to the greatest giant ellipticals, which are football-shaped swarms of stars thought to be the universe’s biggest and brightest galaxies. But now a search across billions of light-years has snared a rare breed of "super spiral" galaxies that rival their giant elliptical peers in size and luminosity, raising questions over how such behemoths are born.
"I was really surprised," says Patrick Ogle, an astronomer at the California Institute of Technology who discovered the super spirals earlier this year. Ogle looked for them by analyzing the NASA Extragalactic Database, an online compendium of galaxy information. He examined nearly 800,000 galaxies within 3.5 billion light-years of Earth, ranking them by luminosity—in particular, by how much visible light they radiate.  Astronomers designate the characteristic luminosity of big galaxies with the symbol L*, which is pronounced "L star" and roughly corresponds to the brightness of our own Milky Way.
Galaxies much brighter than L* are extremely rare, and are typically ellipticals. Nevertheless, such powerhouses do exist, and the brightest galaxy in Ogle's sample shone with a luminosity of 20 L*. Sure enough, it was a giant elliptical galaxy in a galaxy cluster.
But as Ogle's team reports in work submitted to The Astrophysical Journal last month, three percent of the most luminous galaxies they found are actually spirals. "They look like normal spiral galaxies, but until you quantify how far away they are, you don't realize how big and bright they are," Ogle says. "I think that's probably why people didn't notice them before." His sample shows 53 spiral galaxies with luminosities between eight and 14 L*. The largest super spiral, located in the constellation Hercules, possesses a disk of stars 440,000 light-years across, four times the size of the Milky Way's stellar disk.
"These things are really rare," Ogle says. Super spirals only pop up once in every billion cubic light-years of space, so astronomers have to look a long way to see any. Whereas the best-known giant elliptical galaxy, M87 in the Virgo cluster, is 54 million light-years from Earth, the closest super spiral galaxy in Ogle's sample is 1.2 billion light-years distant. Because of their great distance, these galaxies look blurry in current images; the Hubble Space Telescope has not yet imaged them to reveal their full beauty.
William Keel, an astronomer at the University of Alabama, Tuscaloosa who was not affiliated with the research, says he knows of only one remotely comparable galaxy: the equally large but less luminous UGC 2885, a spiral galaxy in the constellation Perseus. "One [galaxy] is a pet rock; ten is a statistical sample," Keel says. With more than fifty super spirals now known, astronomers hope to learn how these enormous entities arose.
"That's the biggest puzzle," says Debra Elmegreen, an astronomer at Vassar College not involved with the discovery of the super spirals. "Why are they there? Why aren't they already ellipticals?" Elliptical galaxies can grow huge because they often occupy the busy centers of galaxy clusters, where they gobble other galaxies. Spiral galaxies prefer quieter, less populous neighborhoods; moreover, galactic collisions usually disrupt the delicate spiral galaxies and transform them into amorphous ellipticals.
Still, even normal-sized spiral galaxies can outshine their giant elliptical counterparts in star formation, which mostly occurs in a spiral galaxy’s gas-and-dust-packed arms. The super spirals are no exception, and are prodigiously producing stars by converting between five and 65 solar masses of gas into suns each year. For comparison, the Milky Way's rate is just two solar masses a year. Spirals can sustain their star-making over eons by grabbing additional gas from intergalactic space. As a galaxy grows more massive, however, that infalling gas crashes in so fast it heats up to tremendous temperatures that inhibit star formation. So a spiral galaxy should only get so big. Yet, somehow, the super spirals keep on growing.
One clue to their origin may come from the finer details of their architecture. Four out of fifty-odd super spirals have double nuclei, suggesting that each of the four arose from the merger of two smaller spiral galaxies. Normally a spiral-spiral merger makes an elliptical galaxy, but if two spirals approach each other just right—with their disks parallel and both spinning the same direction—the pair can join forces to create an even larger spiral galaxy. In support of this idea, two of the super spiral galaxies harbor bright quasars at their centers. A quasar lights up when gas plummets into a galaxy’s central supermassive black hole, a process often triggered by a galactic merger.
Ogle says the super spirals will eventually fade over billions of years as they run out of gas and cease star formation. He suspects each will become a so-called lenticular galaxy, a cross between a spiral and an elliptical: Like a spiral galaxy, a lenticular has a disk of stars, but like an elliptical galaxy, it has too little gas to give birth to any more, and lacks spiral arms. Long before the super spirals suffer this fate, however, an armada of telescopes is sure to scrutinize them to settle once and for all how these beautiful objects managed to grow to such colossal proportions.
Quelle: Scientific American
Astronomie
« Zum vorherigen Eintrag Zum nächsten Eintrag »
2302 Views
Created with page4