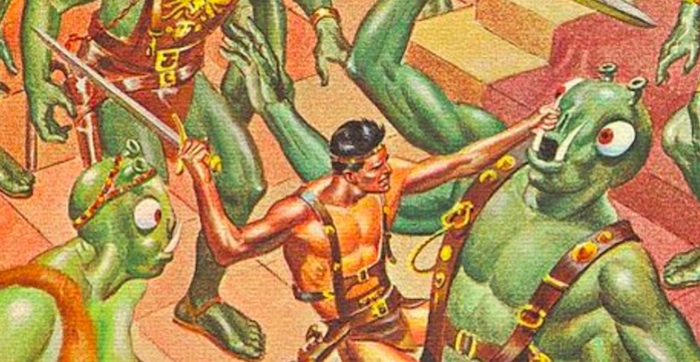 Imagine two nearby exoplanets orbiting the same sun, each with its own indigenous civilisation. They’re going through history either as companionable neighbours or deadly rivals. This is a familiar situation in science fiction, but could it ever happen?
With the rapidly growing number of habitable exoplanets being discovered, this scenario may seem plausible. Now a new scientific study, to be published in the Astrophysical Journal, explores this issue by examining some of the conditions affecting life in a solar system with two habitable planets.
The researchers were inspired by NASA’s discovery of Kepler 36b and Kepler 36c, the two known planets of the star Kepler 36. The orbital distances of these planets from their star differ by only 10%, making them extremely close neighbours.
. 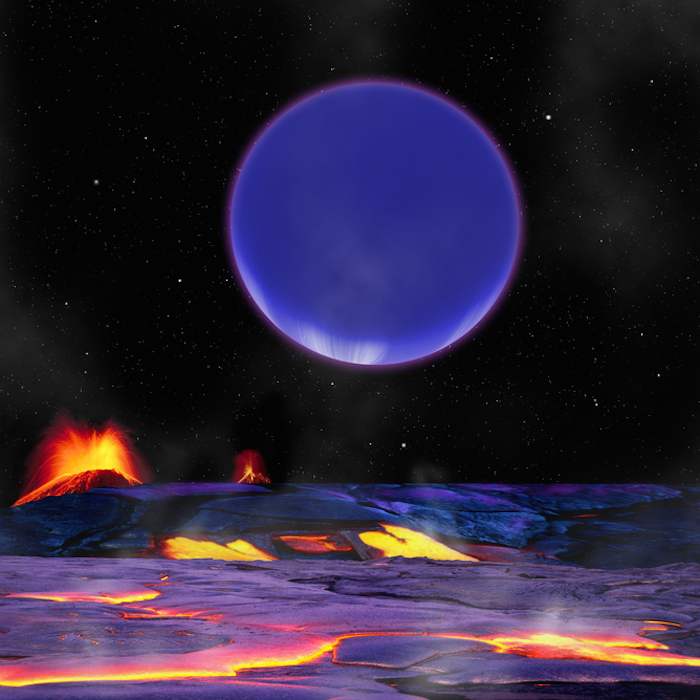 An artist’s conception of what Kepler 36c might look like from the surface of Kepler 36b.  NASA/Harvard-Smithsonian Center for Astrophysics/David Aguila
.
The inner planet completes seven orbits in the time that it takes the outer planet to complete six orbits (a situation described as 7:6 mean motion resonance). This means that once in every six or seven of your years (depending on which planet you live on), your neighbouring planet passes close by.
Wild wobbles?
The researchers first of all wondered if these periodic close passages would affect the tilt of either planet’s axis. This is important in the context of life because large fluctuations in axial tilt would lead to drastic variations in climate. While not fatal for microbial life, it could reduce the chances of complex life emerging and make it very hard for any intelligent life that did evolve to establish a long-lasting civilisation.
In the case of Kepler 36b or Kepler 36c, it is highly unlikely that life could exist, because they are too close to their star and have surface temperatures approaching 1000C. The researchers therefore analysed a hypothetical pair of Earth-like planets in 3:2 resonance, both within their star’s habitable zone where liquid water would be stable on their surfaces.
Reassuringly for the prospects of complex life, they found that neither planet’s axial tilt was driven to vary wildly as a result of their closeness.
Hitching a ride in a rock
Assuming that life existed on one of them, they then wanted to find out whether it could spread to the other. It is well established that rock-dwelling microbes can survive the shock of an impact that would throw them off a planet, followed by periods of years in space, and then passage down to the ground on another world. Indeed in an experiment on the Long Duration Exposure Facility, retrieved by the Space Shuttle in 1990 after six years in space, 30% of bacteria embedded in salt crystals survived.
The theoretical concept of life spreading from world to world is called “panspermia”, and because this variant involves travel encased within rock it is referred to as “lithopanspermia”. The study found that lithopanspermia should be remarkably easy between planets sharing 7:6, 6:5, 4:3 or 3:2 orbital resonance. They would frequently pass so close to each other that impact debris flung off one would stand a good chance of raining down on the other after a relatively brief journey through space. This, they speculate, would mean that if life emerged on either one of a habitable pair of planets then it would easily spread to the other.
But what kind of organisms would survive? Although tiny invertebrates called tardigrades have been successfully revived after exposure to the vacuum of space, they would be unlikely to survive impact shock or long durations in space, and so it seems that single-celled microbes are the most likely to make successful natural interplanetary travellers.
I’m prepared to accept all this. Indeed, the animation below that I led three years ago argued that if we ever find life on Mars then it will be vital to establish whether it arose independently of life on Earth, or whether life spread from one to another inside meteorites..
Twin civilisations?
However, the leap from microbial ancestors to indigenous intelligence on twin worlds would be enormous. Life on Earth took two billion years to go from microbes to multi-cellular organisms, and a further billion years for intelligence and space-faring capability to emerge. Given these enormous time scales, it would be an amazing coincidence if intelligence and technology were to emerge on both worlds in the same million-year period, despite common ancestry and/or an ongoing exchange of microbes.
So the dream, or nightmare, of indigenous civilisations on sister worlds is unlikely to occur. Beings from the first world that are able to develop space travel are likely to go to the other and find an atmosphere and climate that they could tolerate, and maybe food that they could eat – but they wont find anyone to have a conversation with.
Quelle: The Conversation
Astronomie
« Zum vorherigen Eintrag Zum nächsten Eintrag »
2339 Views
Created with page4