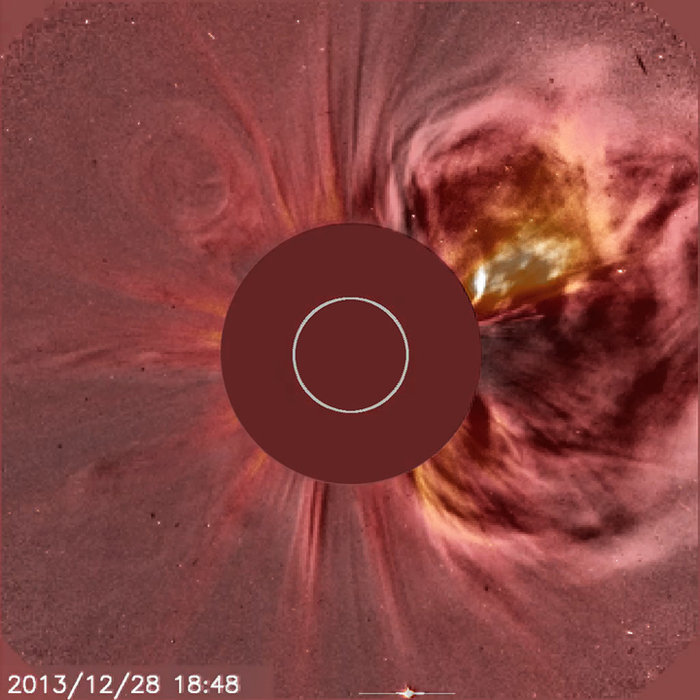 The Sun experiences both calm and tempestuous periods of activity. At its most active, our star can fling out multiple bursts of particles in a single day in events known as coronal mass ejections, or CMEs. Particles within a CME are ejected at speeds of up to 2000 km/s.
Accurate space weather forecasts are still a work in progress, but we constantly monitor the Sun’s behaviour using a fleet of spacecraft. One such solar spy is the ESA–NASA Solar and Heliospheric Observatory (SOHO).
SOHO was launched two decades ago, on 2 December 1995. The craft is exploring our star in detail, from its deep inner core to the constant wind of charged particles streaming out from its surface. Although it was originally intended to be a two-year mission, SOHO has been so successful that it has seen repeated extensions that have allowed it to cover nearly all of two 11-year solar cycles, making it the longest-lived Sun-watching satellite to date.
SOHO uses a clever technique to observe the Sun. By shielding the light from the Sun itself, it simulates a solar eclipse – as demonstrated in this image. The grey circle at the centre of the frame marks the size and location of our star, which has been blocked out so that SOHO’s Large Angle and Spectrometric Coronagraph (LASCO) can study the solar environment in detail without being blinded by sunlight.
This technique reveals much about the properties of the solar corona, a super-heated region of plasma that extends from the Sun’s uppermost layers far out into the Solar System. This is where CMEs are born. SOHO imaged this impressive example of a CME on 28 December 2013; it is visible on the right side of the frame as a blur of dark brown and orange.
Although many of SOHO’s LASCO images have a characteristic vibrant red or blue colour palette, the dusky pink hue of this image is merely due to a difference in image presentation.
. 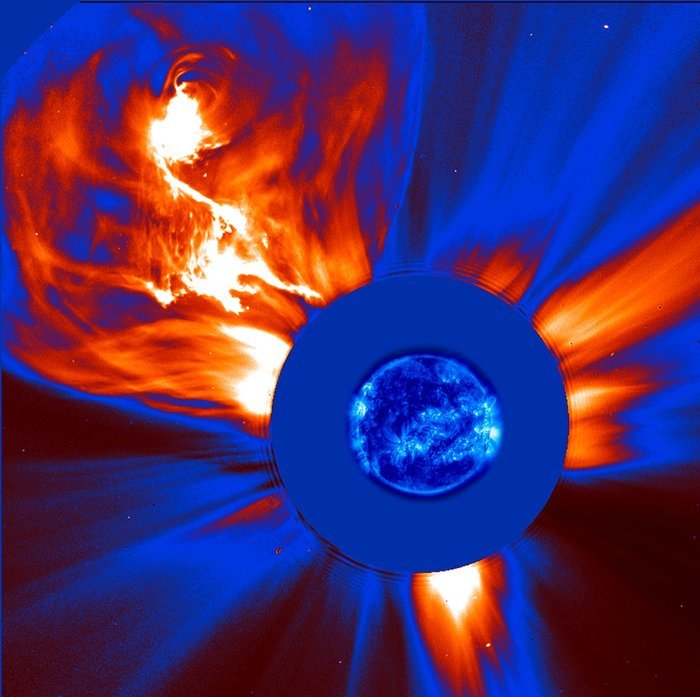 Title A fiery solar explosion
Released 16/09/2013 9:06 am
Copyright SOHO (ESA/NASA)/S. Hill
Description
A coronal mass ejection observed by the ESA/NASA SOHO space mission on 4 January 2002 has been coloured to indicate the intensity of the matter being ejected by the Sun. White represents the greatest intensity, red/orange somewhat less, and blue the least.
An extreme-ultraviolet image of the Sun captured by SOHO’s EIT (Extreme ultraviolet Imaging Telescope) instrument is superimposed on the image. The shaded blue disc surrounding the Sun at the centre is a mask in SOHO’s LASCO instrument that blots out direct sunlight to allow study of the details in the Sun’s corona.
. 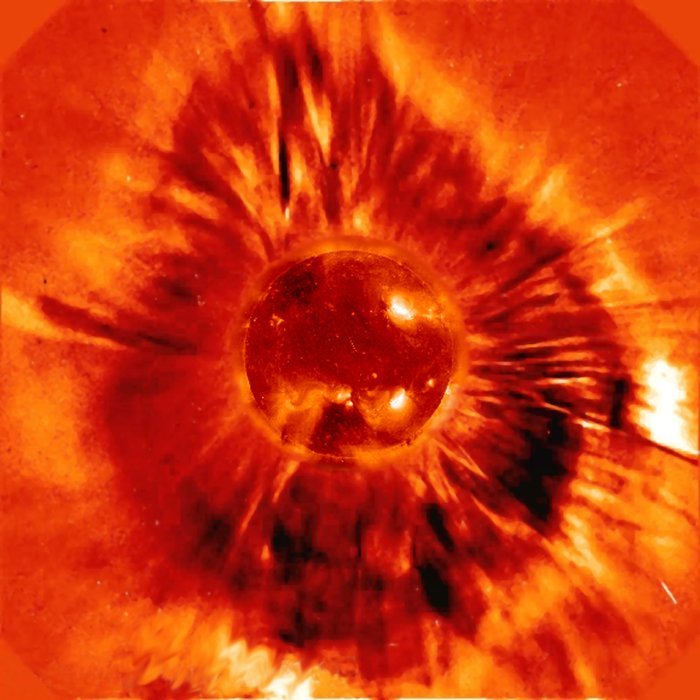 Title Destination Earth
Released 06/05/2013 9:00 am
Copyright SOHO (ESA/NASA)/S. Hill
Description
An artistic look at a coronal mass ejection launched towards Earth. The image is based on data collected by the ESA/NASA SOHO space telescope and comprises an extreme-ultraviolet image of the Sun’s disc (not to scale) superimposed on an image of the stormy solar environment. The scene has been processed using the running difference technique.
This image featured in a SOHO ‘The Sun as Art’ portfolio in 2002 and was highlighted as space science image of the week on 6 May 2013.
Quelle: ESA
Astronomie
« Zum vorherigen Eintrag Zum nächsten Eintrag »
2387 Views
Created with page4