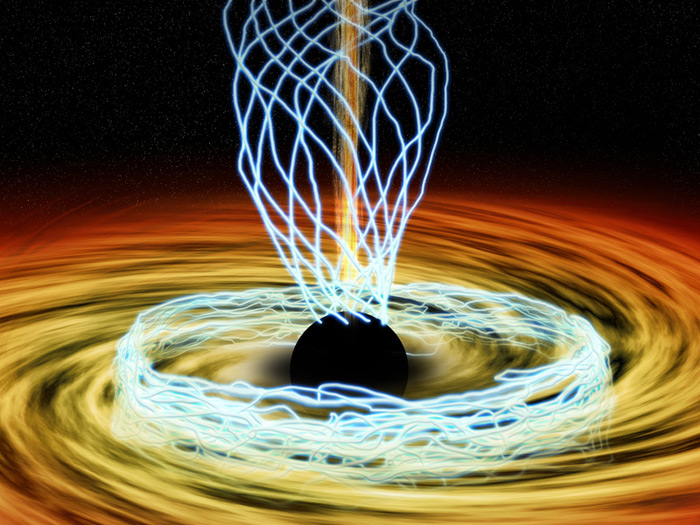 Artist's conception of the black hole at the centre of our galaxy, surrounded by a hot disc of accreting material. Blue lines trace magnetic fields. The Event Horizon Telescope(EHT) has measured those magnetic fields for the first time, with a resolution of six times the size of the event horizon (six Schwarzschild radii). The fields in the disc appear to be disorderly, with jumbled loops and whorls resembling intertwined spaghetti. The EHT also found regions showing much more organized patterns, possibly where jets (shown by the narrow yellow streamer) would be generated. (Courtesy: CfA/M Weiss)

The first direct evidence of magnetic fields near a black hole has been found by researchers using the Event Horizon Telescope (EHT), who have seen such fields around Sagittarius A* (Sgr A*) – the black hole at the centre of our Milky Way galaxy. While such magnetic fields have long been predicted, this is the first time that they have been detected close to the "event horizon" of the black hole. Magnetic fields near a black hole are thought to power the huge relativistic jets that emerge from many accreting black holes and blast across thousands of light-years – shaping entire galaxies along the way.
Global effort
Astrophysicists have long been keen to understand how relativistic jets form and where they get their colossal power. However, detecting them at or near the event horizon – the boundary at which even light cannot escape a black hole's gravitational pull – has been an impossible task until very recently. The Event Horizon Telescope (EHT) – a global network of radio telescopes that are linked together to function as one giant, Earth-sized telescope – now makes it possible to resolve features at the horizon of Sgr A*. This is the Milky Way's 4.5 million solar-mass black hole that is hidden behind colossal veils of gas and dust some 26,000 light-years away from Earth.
The EHT uses a radio-astronomy technique called very-long-baseline interferometry (VLBI), and its network of receivers extends from Hawaii to Spain (illustration below). It is still being built but when it is fully functional, it should be able to resolve features as small as 15 micro-arcseconds – an angular resolution that would allow it to see an orange on the surface of the Moon.
. 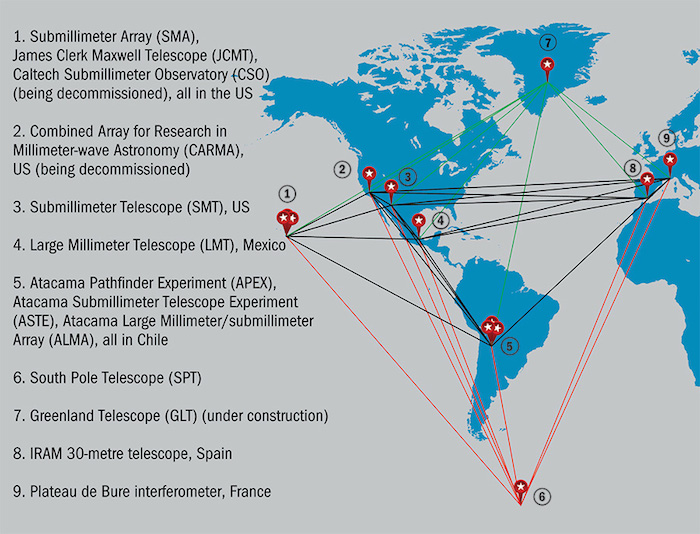 The 13 radio telescopes – past, present and future – involved in the Event Horizon Telescope. This map also shows the coincident visibility lines between telescopes. Telescopes connected by these lines will work together to image black holes. Green lines indicate connections used for objects in the northern sky, red lines for objects in the southern sky, and black lines denote telescopes viewing both northern and southern skies. (Courtesy: Perimeter Institute)
.
To make its measurement, the EHT team connected together four telescopes: the Submillimeter Array and the James Clerk Maxwell Telescope, both in Hawaii; the Submillimeter Telescope in Arizona; and the Combined Array for Research in Millimeter-wave Astronomy (CARMA) in California. The team observed the polarization of the incoming radio waves on different angular – and therefore spatial – scales. The orientation of this polarization is dependent on the orientation of the local magnetic fields in the vicinity of Sgr A*.
Polarization data
EHT researcher Michael Johnson, from the Harvard-Smithsonian Centre for Astrophysics, explains that each telescope records two data streams that capture both the right- and left-handed circular polarization of the incoming radio waves. The team then compares streams from different telescopes using a supercomputer. In the past, all of the data used by the EHT compared streams that were of the same handedness: right versus right and left versus left. The cross-hand signals are much weaker, but they carry information about the linear polarization. "Because of technical advances with the EHT, we can now detect this polarization information. And because the emission near Sgr A* is synchrotron radiation, the direction of linear polarization traces the magnetic fields. So that's how we can go from measuring polarization at the telescope to understanding magnetic fields near the black hole," says Johnson.
EHT physicist Avery Broderick, of the University of Waterloo and the Perimeter Institute for Theoretical Physics in Canada, told physicsworld.com that this is the first time that researchers have detected horizon-scale order in the magnetic fields in the immediate vicinity of a black hole and not thousands of Schwarzschild radii away. "By measuring high-polarization fractions on horizon scales, compared with low polarizations on scales 5–10 times larger, we have shown that the polarization patches, and thus magnetic fields, are organized on horizon scales," says Broderick.
The researchers were "shocked to see how strong the polarization signal was on our longest interferometric baseline", says Johnson, adding that the polarization fraction on the longer baseline was a factor of 10 higher than what the shorter baselines detect. "Such a dramatic difference in how the polarization appears when you observe with the highest angular resolution really took us by surprise, and it comes about because of this mix of ordered and tangled magnetic fields near the black hole. The ordered fields are good news for theories of jets, since ordered fields are thought to play a central role in the formation and collimation of these jets."
The other surprise that lay in wait for the team was just how active the polarization was and how it changed on a daily basis. "On one day, the polarization traced out a clean 'loop' over the two-and-a-half-hour observation, possibly from orbiting material very close to the event horizon," says Johnson. The researchers also saw fluctuations in the strength and direction of the horizon-scale linear polarization from Sgr A* over a 15 min timescale, revealing the extreme dynamic at play at the heart of the black hole. Indeed, the innermost orbits near Sgr A* have timescales of about 30 min, so the fluctuations most likely arise from turbulent fields in the innermost accretion disc. Johnson points out that "it is very difficult for material to fall into a black hole without turbulence, so these first direct observations of the turbulence are finally placing these accretion theories on firm observational footing".
Once the EHT is functioning with its full complement of telescopes, the researchers will study these magnetic fields repeatedly, as they try to understand what drives accretion onto black holes and what powers their jets. While Sgr A* does not currently have a jet, the team's other candidate – the supermassive black hole at the centre of the M87 galaxy – has a prominent one, and the researchers hope to understand what role the magnetic fields play in launching and powering that jet. "All of that means that we are one step closer to understanding, and ultimately removing, the uncertain astrophysics that complicates the forthcoming precision tests of Einstein's general relativity in the strong-gravity limit," adds Broderick.
Quelle: physicsworld
Astronomie
2150 Views
Created with page4