November 23 1955 Spirit Lake, Iowa
In the UFO evidence, this case is described in the chronology:
November 23, 1955--Spirit Lake, Iowa. Ground Observer Corps spotters reported a brilliant object which changed color, moved erratically. [VII]1
Going to section VII, we read these details:
November 23, 1955; Spirit Lake, Iowa. Earl Rose (a biologist) and Gay Orr (superintendent of schools) were on duty at the GOC post about 5:45 p.m. Attracted by a multi-motor sound on their amplifying pickup system, the two men scanned the sky with binoculars. A brilliant object at low altitude was visible maneuvering erratically to the southwest. As it moved, the UFO changed color from white to bluish-white to green and red. For about twenty min- utes, Rose and Orr watched the gyrating object as it moved forward, up and down. At one point, the UFO hovered over Center Lake for about 10 minutes. Its maneuvers were totally unlike an aircraft, and it moved against the wind. [27.]2
Note 27 is listed as the Des Moines Register for November 24, 1955. There appears to be no additional information beyond a simple newspaper clipping. I found a copy of the same story in the Cedar Rapids Gazette on the 24th of November.3 NICAP’s summary of the event is essentially a repetition of that story, which was published in several papers.
A check of the Bluebook files did not reveal any investigation of the case because it is not part of the system. No report was filed. 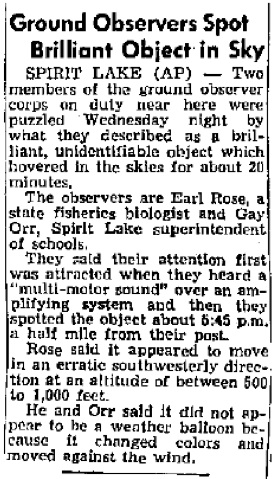 Possible source
There seems to be a good possibility this was an astronomical object. Did the weather support an astronomical event? Nearby Sioux City listed the sky conditions as clear so visibility was good.4
Sunset was at 4:57 PM CST and Nautical twilight ended at 6:03 PM. This means the sky was darkening. If it were an astronomical object it would have been pretty bright. A planet or first magnitude star might be the source.
The evening sky had this view to the southwest at 5:45 PM CST. Venus, at magnitude -3.9 was low in the sky (3 degrees elevation) at azimuth 232 degrees. Venus set around 6:10 PM, which closely matches what the observers reported. They stated the object disappeared twenty minutes after initial observation.
.

The apparent movement of the UFO (gyrating, moving up, down, and forward) are good examples of the auto-kinetic effect familiar to many careful UFO investigators. Most important is that the observers never reported Venus as being visible or near the object. Failure to mention Venus tends to add weight to the conclusion that they had observed Venus.
Solved?
Based on all of this information, it appears that Venus is a good candidate for this sighting. We can’t say for sure but it is very likely. I would reclassify this as “probably Venus”. With that in mind, we can declare this is not an example of Best Evidence. It is also another example of “trained and reliable observers” mistaking the planet Venus for a UFO.
Quelle: SUNlite 6/2015
UFO-Forschung
2328 Views
Created with page4