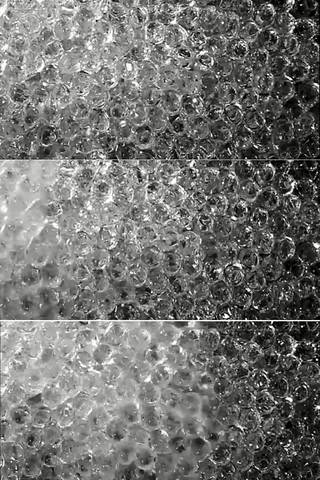 This video frame capture shows a pulse flow in the microgravity airplane. The frames should be read from the top down, and show the pulse front (seen as the leading edge of a "lighter" region in the image) advancing from left to right. Pulse flows are desired in packed bed reactors because they enhance inter-phase contact --thus making the process more efficient.

Getting Into the Flow on the International Space Station

Think about underground water and gas as they filter through porous materials like soil and rock beds. On Earth, gravity forces water and gas to separate as they flow through the ground, cleaning the water and storing it in underground pools. Gravity's role is significant in the process, both in nature with ground water and in chemical processes such as water reclamation reactors.
How this filtering works on Earth is well understood, even when the flow consists of different fluids. The process is still a mystery in microgravity.
"There are a lot of different types of reactors," said Dr. Brian Motil, principal investigator, PBRE, NASA's Glenn Research Center. "When you have a single phase, just a liquid or a gas, it behaves pretty much the same on Earth as it does in microgravity. However, when you get two different phases, like gas-liquid where the densities are very different, you end up with some very different behavior when you go from the ground to space."
The Packed Bed Reactor Experiment (PBRE) is a basic science investigation designed to fill in the missing information as to how two-phase mixtures flow through porous media in microgravity. PBRE, which is scheduled to launch on the next Commercial Resupply Services mission to the International Space Station Dec. 3, could provide answers that would help design more efficient reactors for space, particularly for those long-duration missions like trips to Mars.
Reactors used on the space station and in space missions are critical. Without them, life in space would not be possible. They reclaim water, clean air, and provide many of the life-sustaining processes we take for granted. Because of the gap in our knowledge about how two-phase systems work in microgravity, designers don't have the necessary tools to create more efficient systems.
"In general, what we've done at NASA is try to avoid two-phase reactors," said Dr. Enrique Ramé, project scientist, NASA Glenn. "It's a complex problem, but we can't always avoid two-phases. Sometimes gas bubbles come out of a solution and you end up with two phases even though you don't want them in the reactor. That causes problems for people who are designing water reclamation, air revitalization and those types of systems."
. 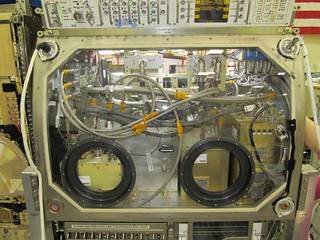 The PBRE is seen integrated into the Microgravity Science Glovebox.
.
PBRE will be conducted over eight weeks on the space station in the Microgravity Science Glovebox (MSG), a self-contained, suit-case sized lab. At 324 pounds (147 kilograms), PBRE is the heaviest and largest experiment in the MSG to date.
While PBRE will look at hydrodynamics, it will not include any chemical reactions.
"The PBRE has the capability to provide a wide range of water and air flows through two randomly packed test beds. The packing is 3 mm spherical beads," said Cathy Frey, PBRE operations lead, NASA Glenn.
Using two types of beads will allow researchers to measure flow through materials that have different levels of "wetting", a liquid's ability to maintain contact with a surface. One test bed will be packed with a glass beads, wetting, while the other will have non-wetting Teflon™ beads.
The experiment will measure pressure and flow rates. Two high-speed, high-resolution cameras will capture images of the flow conditions.
"After the initial testing is complete, PBRE will be available for additional research," said Motil. "The test section and diagnostics are replaceable to allow for any type of air-water experiment, allowing for NASA or industry to test any type of component or subsystem."
PBRE will develop and validate scaling and design tools for future two-phase reactors in microgravity. It will also identify strategies to recover single-phase packed beds from undesired gas bubbles. Results from this experiment may lead to the ability to operate reactors in space at greater efficiency than we can on Earth, thus benefiting future deep space missions.
. 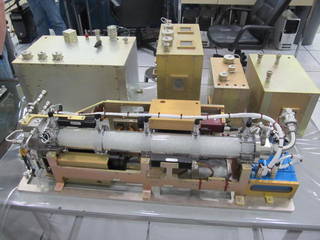