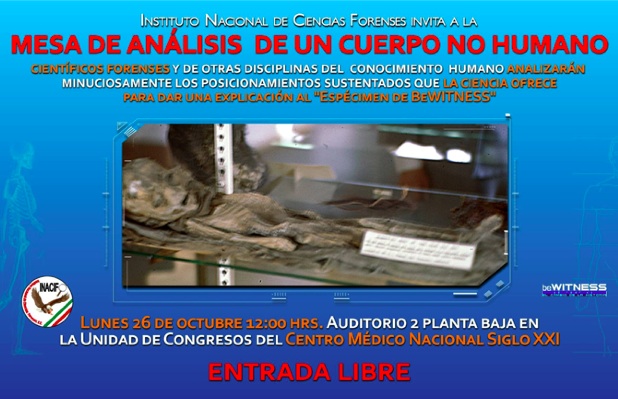 Raising the Ante On the Roswell slides

Jaimie Maussan is desperately trying to save his reputation by paying some experts to back his interpretation of the Roswell slides. In a promotional video, Maussan announced that on October 26, INACIFO was going to hold another press conference where they would pronounce that the work done by their Dr. Zalce was correct and that the body is “non-human”. The Director of INACIFO, Mr. Miguel Angel, told Maussan1:
1. That he thinks the slides are evidence of life on other planets
2. Presented an invitation for scientists and anthropologists to attend
3. Backed the work of Dr. Zalce’, who concluded the body was “non-human”.
4. They are interested in studying the slides and money has nothing to do with it.
Maussan added that nobody has shown that Zalce’s work was incorrect. This is not true. In SUNlite 7-4, I demonstrated that Zalce’ was wrong in how he computed the body’s height. Maussan and his “experts” (Zalce’ among them), all failed to understand the simple concept of perspective. Not once has Zalce’, INACIFO, or Maussan addressed this issue. They are either unable to understand the concept of perspective or are purposefully ignoring the argument.
INACIFO and Maussan appear to be “doubling down”. Zalce’s inaccurate work was presented under the INACIFO label and, rather than admitting that a mistake was made, they backed his conclusions. The motto of INACIFO is “For the truth through science” but they appear to have ignored it. They have yet to publicly answer the critics outside the confines of Maussan’s protective custody and this little dog and pony show was no different.
The program occurred during my work day and I only saw brief glimpses of Dr. Zalce’, Dr. Cruz, and Jaimie Maussan pretty much repeated the same claims they have been making all along. They still believe the body is four feet long and they are sure it is not a mummy. Maussan and his experts attempted to say the image in the slide is not the Palmer mummy for various reasons. This image was presented and, to me, the two bodies looked pretty similar. The only differences appear to be the angle the image was taken from and the layout of the body. 2 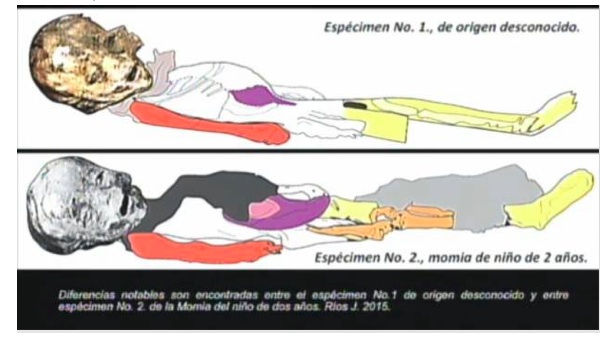 What seems to have gone unnoticed by the slide promoters is that the Palmer mummy is 29 inches in length. In this comparison, both bodies were scaled to have the same length. If the Roswell slide body was really four feet tall, the head would have been about 3/5ths the size of the Palmer Mummy’s head after it had been scaled down in size. Instead, the heads are the same approximate size. This indicates that the Roswell slide body is the same length.
As far as the placard is concerned, it seems that it is now being accepted that it was correctly read but it was all a government smoke- screen. The body is an alien/non-human, which was placed in a museum. The placard was put in front of the body to deceive the viewers into thinking they were looking at a mummy. This was so the government could gauge the public’s reaction to seeing an alien body! This kind of logic could only be accepted by people wanting to blindly believe and this kind of nonsense you see on an episode of Hanger one. For some reason, people still think that Maussan is making UFOlogy respectable!
In my opinion, the entire program was staged for the benefit of Maussan and INACIFO’s reputation. Had they really wanted to an- swer the critics, they would not hide behind such theatrics. Instead, they would publish in a scientific journal, where real experts could tell them all the problems with their analysis. This is something they probably would want to avoid. It is bad enough to be laughed at by skeptics. They would not want to be laughed at by their peers.
Notes and references
1. “BeWitness analysis and debate”. Contacto con Jaimie Maussan. 6 October 2015. Available WWW: https://www.youtube.com/ watch?v=fH0iIfoENPI&feature=youtu.be
2. “Analysis of non-human body”. Live broadcast. 26 October 2015. Available WWW: http://www.tercermilenio.tv/
Quelle: SUNlite 6/2015
----
The Roswell Corner
With the death of the Roswell slides, we are back to arguing over interpretations of the stories told about the event. Kevin Randle posted a commentary about the Roswell time line, which brought up some valid points that are not covered by the UFOlogical time line regarding Roswell. Randle openly questioned how Marcel could spend time cleaning up the debris field and still arrive home late. To him, it should not have taken the entire day on Monday to clean up the debris field. Of course, in my time line (See SUNlite 4-4), Marcel arrived at the debris field late in the day. If Randle divorced himself from the idea that Marcel stayed overnight, the answer would be obvious. Unfortunately to accept the possibility that he was not present at the Foster Ranch on July 6th, would mean that Marcel was mistaken and that the 1947 testimony may be correct. Kevin Randle’s puzzle was answered long ago but he just can’t recognize it.
In the same blog entry, Kevin Randle implied that Colonel Blanchard could not have fooled by the Rawin reflector debris because he MUST have known about the Circleville findings. This rational acts as if Colonel Blanchard, and his staff, had access to a 1947 ver- sion of the Internet. The only news that Blanchard would have access to was the Roswell Daily Record (RDR) and Morning dispatch (RMD). Was the Circleville story, complete with photographs, available in those two media outlets? Randle, who has researched this subject for three decades, probably looked over every issue of the RDR and RMD for the weeks before and after the event. If the Cir- cleville case was mentioned, I am sure he would have presented this evidence. The only story that is known to be mentioned in the Roswell dispatch regarding recovered discs prior to July 9th, I have discussed previously. They involve two discs being recovered in Texas and was published in the Roswell dispatch on July 8th. The descriptions of these discs were very similar to RAWIN targets. This
news paper story, not the Circleville one, was probably staring Blanchard in the face when Marcel came into his office that morning. 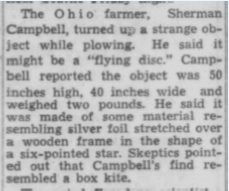 As far as the Circleville story goes, the national media coverage was limited. Some of the papers had photographs of the disc stating it was a radar reflector. However, there was a story that was circulated by the International News Service on July 6th, which gave a one paragraph description of the Circleville incident. It stated that farmer Campbell found a “flying disc” in his field and that it resembled a box kite. It never mentioned the words balloon or radar target. Had Blanchard seen this article, he probably would have put it in the same category as the July 8th RMD article. That
being that these objects were being called “crashed discs” and what Marcel brought back, based on the Fort Worth photographs, matched that description.
Stating that Blanchard absolutely knew about Circleville requires more evidence than, “I say so therefore it is”. Far too often the Crashologists repeat these statements as if they were facts when they are not. It is just another case of Crashology trying to ignore other possibilities and is the same reason the Roswell slides ended the way they did.
Ramey “memo” resurrection?
In an effort to uncover the UFOlogical truth about Roswell, David Rudiak, Kevin Randle, and Martin Dreyer (who may be the “myste- rious” Nitram Ang) made another high resolution scan of the infamous “Ramey memo” photograph. Based on what Lance Moody told me, the new scans really did not help much. Randle states that skeptics were involved but the only one that I was aware of viewing the scans was Lance Moody. According to Randle, he was going to post the scans on line but only posted one scan because of the concerns about copyright. The image he did post appeared to be processed and was not a raw image. If, and when, these original scans are posted, it is hoped that somebody will be able to resolve the memo.
Resovling the text will be a tough nut to crack. The memo is not blurred or out of focus. It is a case of signal-to-noise. The signal (the writing on the letter/memo) is being lost in the noise (the film grain). As a result, this becomes more of a Rorschach test, where various researchers are probably going to see what they want to see. I am sure that some members of the RSRG will be interested in taking a stab at it but it may not produce any conclusive results. Whatever the results are, if any, I am sure that Rudiak will insist that his interpretation is the correct one.
Quelle: SUNlite 6/2015
UFO-Forschung
2015 Views
Created with page4