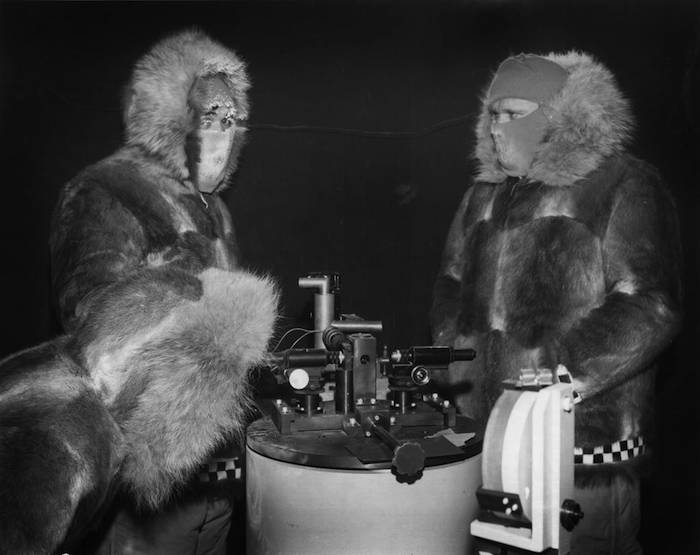 The men in this photo from 1964 are not on a trip through the Arctic wilderness – in fact, they’re inside a facility at NASA’s Goddard Space Flight Center in Greenbelt, Maryland.
They bundled up in furs and ski masks to work in a small cryogenic chamber called the Low Temperature Optical Facility (LTOF). The chamber was built at Goddard in the 1960s to test the optics of the Orbiting Astronomical Observatories. Cryogenic testing helped ensure the spacecraft components could survive the chill of their low-Earth orbit. The spacecraft were some of James Webb Space Telescope’s earliest predecessors, predating the Hubble Space Telescope by about 20 to 25 years. The spacecraft were developed to increase awareness of the benefits to the scientific community of using orbiting telescopes. James Webb Space Telescope is the successor to the Hubble Space Telescope and is slated to launch in 2018.
Webb telescope components will undergo a similar testing process at Goddard in the coming months, but no winter gear will be required this time. The LTOF only reached minus 76 degrees Fahrenheit (F), but the current 40-foot cryogenic vacuum chamber, known as the Space Environment Simulator, reaches temperatures as low as minus 434 F. Webb will orbit a million miles from Earth, a much colder environment than the OAO spacecraft were exposed to in low-Earth orbit. It won’t be possible for employees to enter the thermal vacuum chamber to work during the test, both due to the lack of air in the chamber and because of the low temperatures.
Webb will observe distant objects in infrared wavelengths. Everything that is above absolute zero, or minus 459 F – including telescopes – emits thermal radiation, or heat, detectable in the infrared. To avoid swamping faint infrared signals with the observatory’s own heat, the telescope must operate at extremely cold temperatures. Cryogenic testing will simulate that environment and ensure the hardware will function at these low temperatures.
Quelle: NASA
Astronomie
« Zum vorherigen Eintrag Zum nächsten Eintrag »
2150 Views
Created with page4