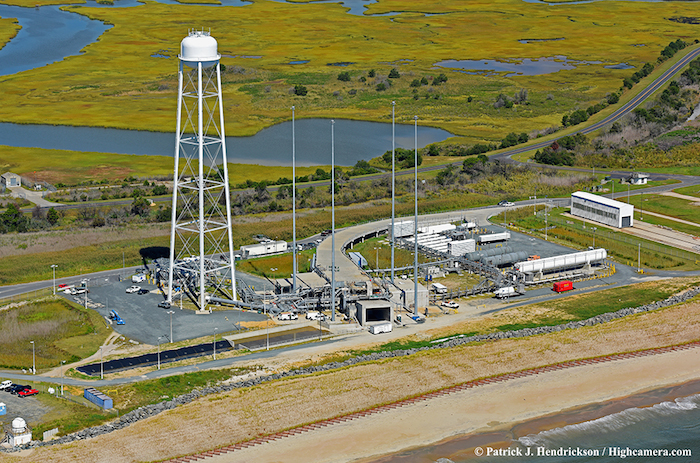 Aerial view of Launch Pad 0A at the Mid-Atlantic Regional Spaceport, taken as repairs were completed.
-
Less than a year after Orbital ATK’s Antares rocket suffered a catastrophic launch failure on October 28, 2014, repairs to its damaged launch complex at the Mid-Atlantic Regional Spaceport (MARS) have been completed in preparation for return to flight. MARS Launch Pad 0A, located at NASA’s Wallops Flight Facility in VA, suffered $15 million dollars in damage after the launch vehicle experienced an engine failure shortly after liftoff and fell back onto the launch complex, exploding.
According to a statement by the Virginia Commercial Space Flight Authority, which owns and operates the MARS facilities, renovations were completed by their deadline of September 30 and fell within the planned budget. The costs for the repairs were split three ways between Virginia Space, NASA, and Orbital ATK, which each contributed $5 million to the project.
. 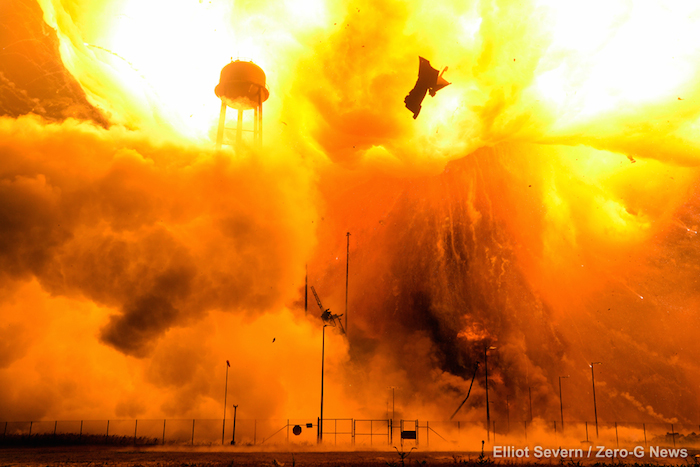 Over the last few months, 90-100 MARS employees and contractors worked round the clock to restore Launch Pad 0A to a flight-ready condition. Work began with remediation around the impact site, where the 20-foot-wide, 10-foot-deep crater was filled and contaminants were removed from the topsoil. Damaged structures were repaired and replaced, including liquid propellant feed lines which supply liquid oxygen and kerosene to the rocket and portions of the sound suppression water deluge system, which flood the pad with water to protect it from the energy released at liftoff. New lightning protection towers were installed, two of which were demolished in the explosion. An upgraded hydraulic system was installed, which will be capable of erecting the new Antares in its heavier 230 configuration. Electrical systems, heating and cooling systems, and the pad’s fire alarm were also repaired.
At the time of the accident, the launch complex was not covered by insurance. If the damage to the $150 million launch pad had been greater, the Virginia spaceport might not have recovered from the accident. Fortunately, the most critical structures at the complex were spared in the explosion. As part of a deal announced in August, Orbital ATK will be responsible for insuring the launch pad for all future flights. Virginia Governor Terry McAuliffe expressed his disapproval of the state’s launch facilities going uninsured and was disappointed that the taxpayers had to pay for an accident that Virginia Space was not responsible for. Liability over the launch failure came under intense debate.
In their own accident investigation report, Orbital ATK blamed the cause of the mishap on a faulty turbopump in one of the AJ-26 engines supplied by Aerojet. The engine supplier made a rebuttal, claiming that improper handling of the engine by Orbital during vehicle processing could have caused the engine to fail. The AJ-26 was originally manufactured in the 1970s as a Soviet NK-33 engine for the N-1 moon rocket. The engine that failed on Antares was completely destroyed in the accident. Little to no evidence remains as to what the root cause of the engine failure was. Despite Aerojet’s claims, the company ended up paying Orbital ATK a $50 million settlement in a lawsuit over the accident. Payment was made on September 30, the same day work at the launchpad was completed. Orbital ATK is also taking ownership of ten of the remaining AJ-26 engines from Aerojet. This marks the end of Aerojet’s involvement with Orbital ATK, which has replaced the engines on Antares with the new RD-181 from NPO Energomash.
According to Dale Nash, executive director of Virginia Space, meeting the September 30 deadline for repairing the launch pad was crucial for keeping the testing and flight schedule on track. A 29-second static hot fire of the upgraded first stage of Antares is on track for December or January. This will test the new Antares first stage configuration with its new RD-181 engines and will prove the flight readiness of the new systems on the launch pad. Orbital ATK plans to launch at least two NASA commercial resupply missions from Wallops in 2016 in addition to two missions that will launch from Cape Canaveral Air Force Station on a United Launch Alliance Atlas V. Orbital ATK is on track to return Antares to flight as early as March, but in accordance with NASA’s ISS cargo logistics requirements, the next mission from Wallops probably won’t have to launch until June. Orbital ATK plans to debut their enhanced Cygnus cargo freighter with its first launch on an Atlas V, currently slated for December 3.
While Orbital ATK and SpaceX are both recovering from their launch failures of two separate NASA commercial resupply missions, NASA chose to postpone the selection of winners for the second round of commercial resupply contacts. Instead, the original contracts with SpaceX and Orbital ATK are being extended in order to meet the space station’s logistics requirements through the second quarter of 2018. Orbital ATK was awarded two additional flights, increasing the contract to a total of ten missions. Four to five of the remaining missions will be launched from Wallops. Orbital ATK had previously reduced the contact to eight flights, utilizing the larger payload capacity of the enhanced Cygnus spacecraft and more powerful launch vehicles to fulfill the CRS cargo requirements. Orbital ATK is competing with SpaceX, Sierra Nevada, Boeing, and Lockheed Martin for the CRS-2 contract, which will supply the space station through 2024. The announcement of the CRS-2 contract winners is scheduled to take place on November 5.
Quelle: AS
Raumfahrt
2264 Views
Created with page4