WHAT MADE THE COMET SING? 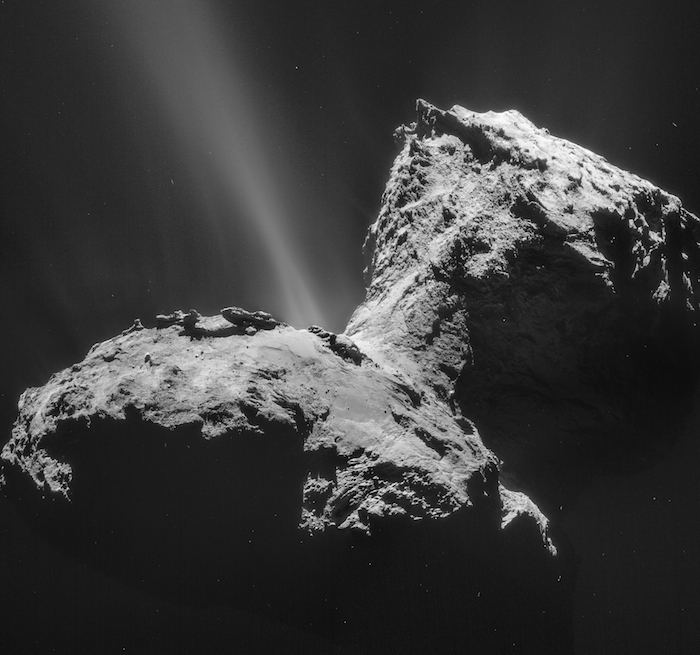 Comet 67P/Churyumov-Gerasimenko on 31 January 2015, at the time when it was still singing. Credit: ESA/Rosetta/NAVCAM – CC BY-SA IGO 3.0
.
Late last year the Rosetta Plasma Consortium (RPC) announced that Comet 67P/Churyumov-Gerasimenko, which ESA’s Rosetta spacecraft has been studying in detail since August 2014, was singing in space. Now, in a paper published in the European Geosciences Union’s open access journal Annales Geophysicae, the RPC team reveals more details about 67P/C-G’s song, including why the comet was singing.
The sounds ‘emitted’ by 67P/C-G are oscillations in the magnetic field around the comet. Its space environment is permeated by the solar wind – a continuous stream of electrically charged gas (called plasma) and magnetic field lines strung along from the Sun – which interacts with the comet’s gas-dust atmosphere. A consequence of this interaction is an induced cometary magnetosphere. In other words, even though the nucleus of 67P/C-G has no magnetic field of its own (as announced at this year’s EGU General Assembly), the comet’s atmosphere or coma is magnetised.
As reported in Annales Geophysicae, the RPC magnetometer on Rosetta started to detect large-amplitude fluctuations in this magnetic field upon arrival of the spacecraft at the comet on 6 August 2014. For four months, until November 2014, the RPC team detected about 3000 cases of wave activity with frequencies of about 40 millihertz.
. 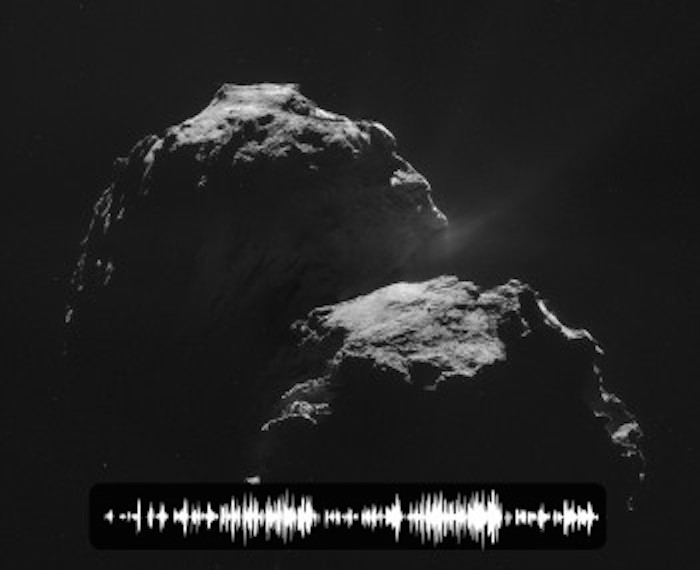 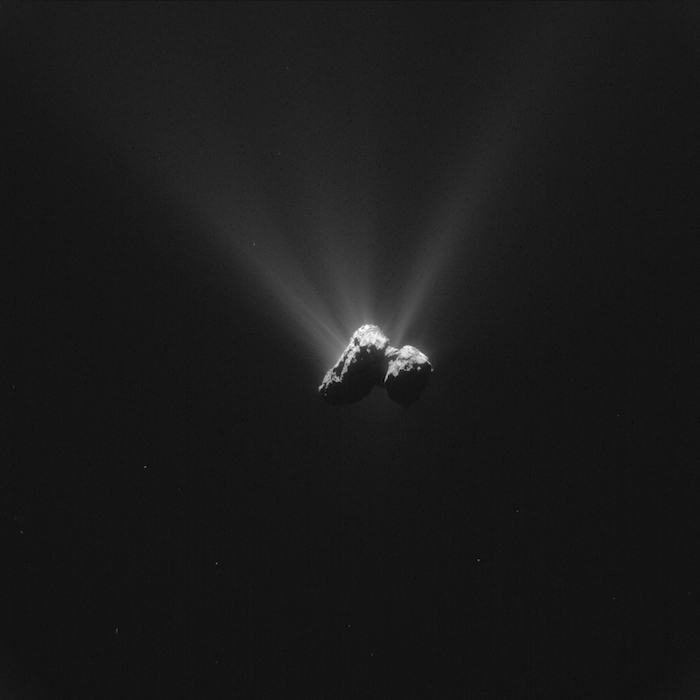 NAVCAM image of Comet 67P/C-G taken on 16 August 2015, 331 km from the comet centre. Credits: ESA/Rosetta/NAVCAM – CC BY-SA IGO 3.0
.
With the large comet lobe pointing to the top left of the image and the small lobe to the bottom right, this spectacular view shows the activity of 67P/C-G just a few days after its closest approach to the Sun. The image has been processed in Lightroom to bring out the jets of dust streaming away from the nucleus.
It is interesting to compare today's image with previous CometWatch entries, in particular those from 24 June and 14 July, in which the comet appears in a similar orientation. With that in mind, you might want to compare the images for evidence of increased activity. But take care to use the unprocessed images shown at the bottom of each CometWatch entry, not the Lightroom processed ones.
In today's view, the elongated depression of Aten stands out on the large lobe, partly in shade; to its right, parts of the Aker and Khepry regions are also visible. On the small lobe, Bastet is well in sight while Ma'at and Hatmehit are cast in shadow, as are also Hapi on the neck and parts of Babi, Seth and Ash on the large lobe.
To find your way around the regions of 67P/C-G, you can explore the recently released interactive comet viewer.
. 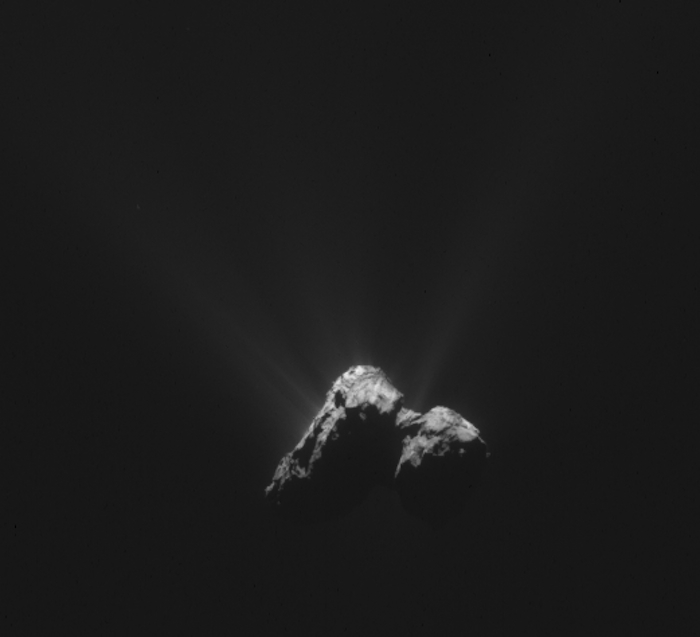 Quelle: ESA
-
Update: 26.08.2015
.
COMETWATCH 12 AUGUST – ANIMATED
Today's CometWatch entry features three images taken over a forty-minute span on 12 August 2015, one day before the perihelion of Comet 67P/Churyumov-Gerasimenko. They were taken by Rosetta's NAVCAM at 336 km from the comet; the images have an average resolution of 28.7 m/pixel and measure about 29.3 km across.
. 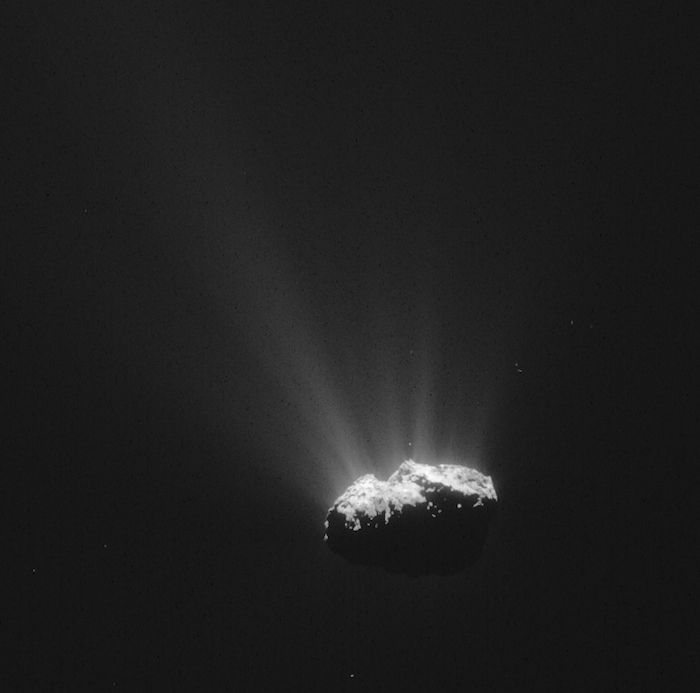 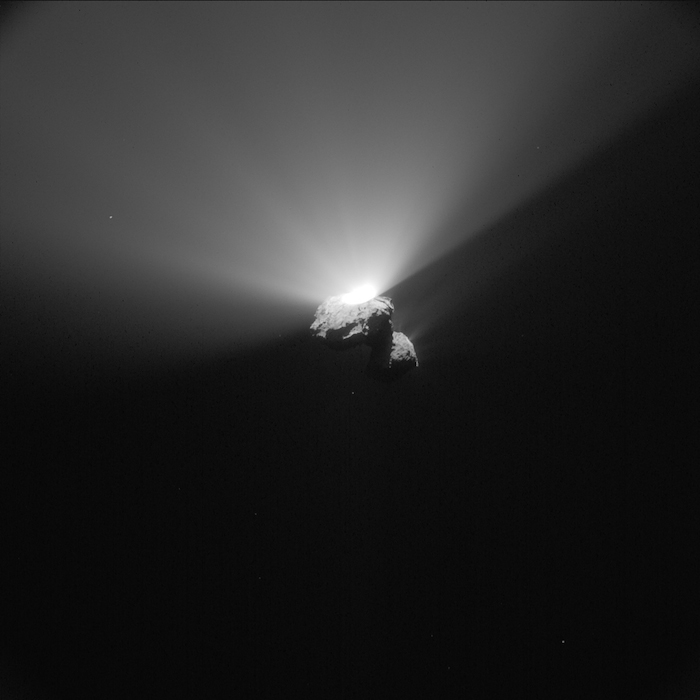 NAVCAM image of Comet 67P/C-G taken on 22 August 2015, nine days after perihelion. Credits: ESA/Rosetta/NAVCAM – CC BY-SA IGO 3.0
-
The image scale is 28.6 m/pixel and the image measures 29.3 km across. Although the activity is extraordinarily bright even in the original (below), the image above has been lightly enhanced to give a better view of the outline of the nucleus in the lower part of the image, as well as to show the full extent of the activity.
In this view, the comet is oriented with the large lobe up, revealing the Imhotep region as well as parts of Ash to the left, Aten at the centre (close to the edge and partly in shade), and Khepry to the right. The outburst seems to originate from a patch of the comet's surface between Imhotep and Khepry.
The smaller lobe can be seen in the lower right part of the image, where indications of the ongoing activity over much of the comet can also be seen.
Comet 67P/C-G made its closest approach to the Sun, or perihelion, on 13 August 2015, just nine days before this image was taken. Based on observations made during previous passages of the comet through the inner solar system, scientists expect the activity to remain high for several weeks after perihelion, and the comet is likely to produce more of these sudden outbursts and peaks of activity.
The science instruments on Rosetta have also observed these outbursts and the teams are busy analysing the data to understand the nature of these events. These in-situ measurements are being complemented by astronomical observations from ground-based and near-Earth telescopes to try and understand the global impact of these events on the much larger coma of 67P/C-G.
The original 1024 x 1024 image of today's CometWatch is provided below:
. 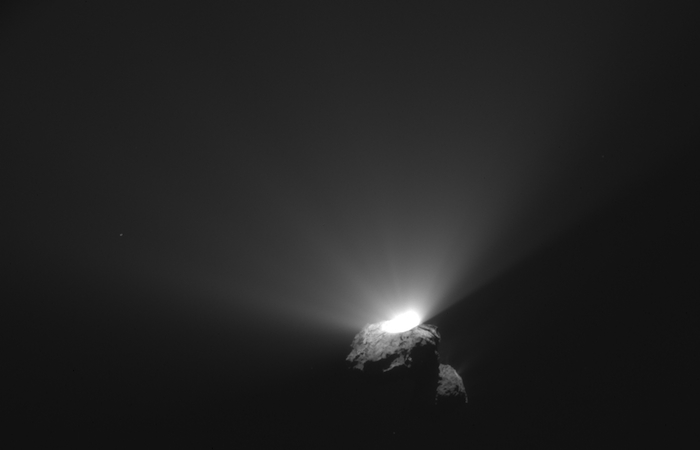 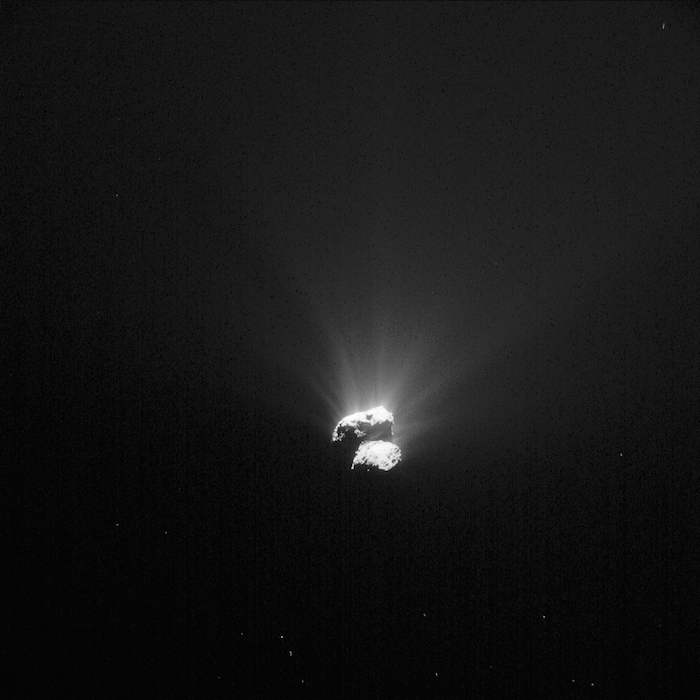 NAVCAM image of Comet 67P/C-G taken on 26 August 2015, about 415 km from the comet centre. Credits: ESA/Rosetta/NAVCAM – CC BY-SA IGO 3.0
.
The scale is 35.4 m/pixel and the image measures 36.2 km across. The contrast was increased to reveal the full extent of the comet's activity.
This view shows the southern hemisphere of 67P/C-G, which had remained in darkness for over five and a half years until seasons changed on the comet in May. Currently, the southern hemisphere is experiencing a short summer, which will last about 10 months, until early 2016.
Ever since, several portions of the comet's surface that were previously cast in shadow were revealed, allowing scientists to identify four new regions on the nucleus of 67P/C-G.
In today's CometWatch image the larger of the two comet lobes points up and the smaller lobe down. On the large lobe, parts of the recently identified region Anhur are visible at the centre, with Anubis and Atum on the right and Aker on the left. Of the other newly named regions, Khonsu is located towards the upper edge of the large lobe in this view, hints of Sobek can be seen on the neck, and Wosret is well in sight on the small lobe.
You can find a regional map here, to help find your way around the southern hemisphere of the comet.
The original 1024 x 1024 image of today's CometWatch is provided below:
. 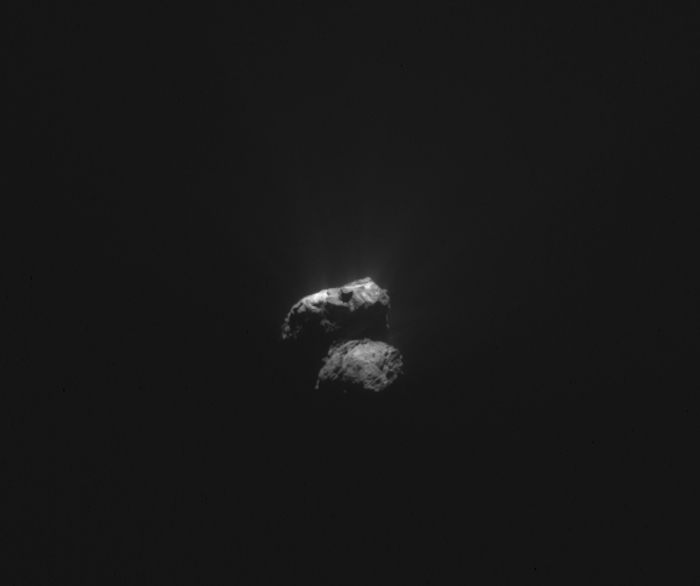 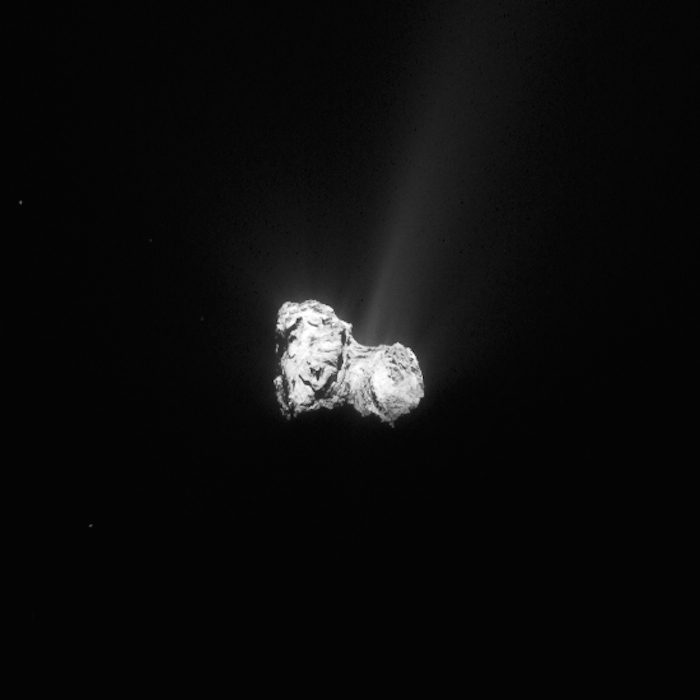 Cropped and processed single frame NAVCAM image of Comet 67P/C-G taken on 30 August 2015, 404 km from the comet centre. Credits: ESA/Rosetta/NAVCAM – CC BY-SA IGO 3.0
The scale is 34.4 m/pixel; the image was cropped and measures 18.9 km across. The contrast was slightly increased to reveal the comet's activity as well as surface details on the nucleus. The uncropped, original image, which measures 35.3 km across, is provided below. You can stretch the contrast even further to see the full extent of the activity.
Like last Friday's CometWatch entry, this image shows the southern hemisphere of 67P/C-G, which came into view in the past few months as the short southern summer started on the comet.
In this orientation, the small comet lobe is on the right and the large lobe on the left. The recently identified regions Wosret and Sobek are visible on the small lobe and on the comet's 'neck', respectively.
On the large lobe, part of the newly named region Khonsu is visible, leading to Imhotep towards the left edge; on the upper left, parts of the Ash region can be seen, and on the lower left, parts of Khepry.
You can find a regional map here, to help find your way around the southern hemisphere of the comet.
. 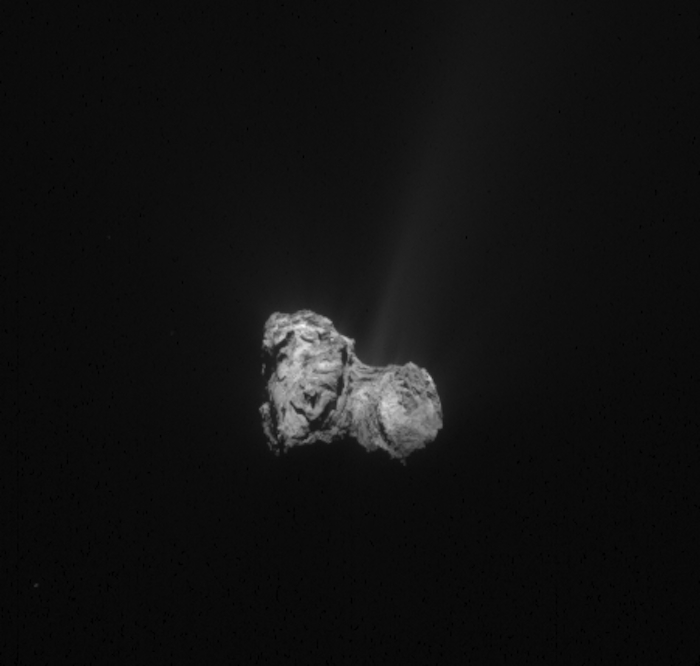 -
COMETWATCH 5 SEPTEMBER
Today's CometWatch entry was taken by Rosetta’s NAVCAM on 5 September 2015, about 445 km from the nucleus.
- 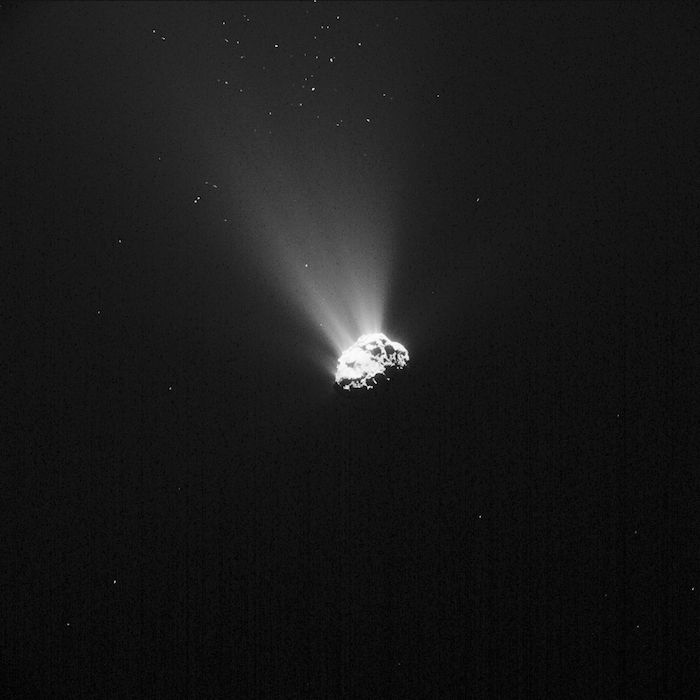 Single frame NAVCAM image of Comet 67P/C-G taken on 5 September 2015, 445 km from the nucleus. ESA/Rosetta/NAVCAM – CC BY-SA IGO 3.0
The scale is 37.9 m/pixel and the image measures 38.8 km across. The contrast was increased to reveal the comet's activity.
Interestingly, many white specks appear to be sprinkled in the upper part of the image, above the intense outflow of dust emanating from the comet's nucleus. This large amount of debris could likely be the result of a possible episode of increased cometary activity shortly before the image was taken.
In this view, the nucleus is oriented with the underside of the large comet lobe pointing towards the observer, while the small lobe is mostly hidden behind. The smooth Imhotep region can be seen as the bright patch towards the left, with the rougher Khepry to the upper right, parts of Aten to the right and some of the circular features of Ash visible to the lower right.
. 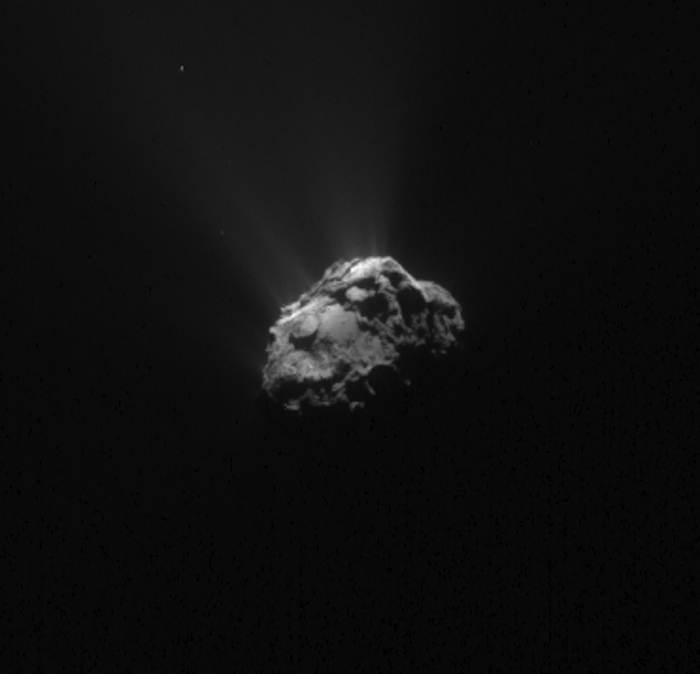 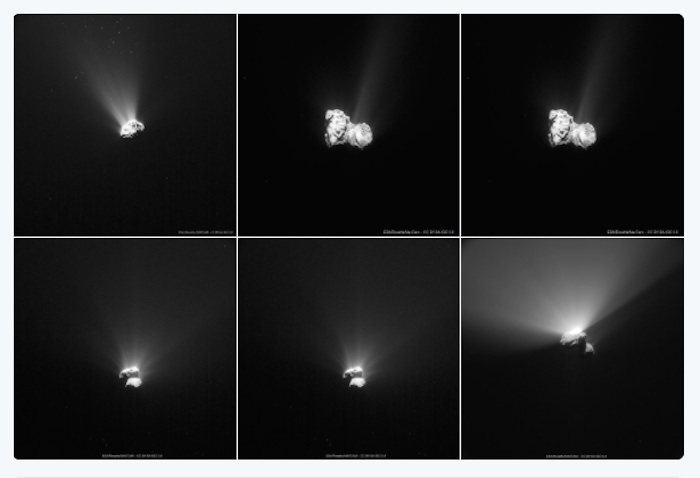 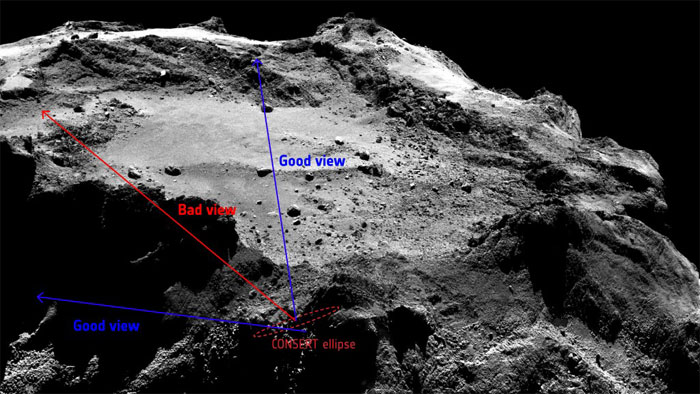