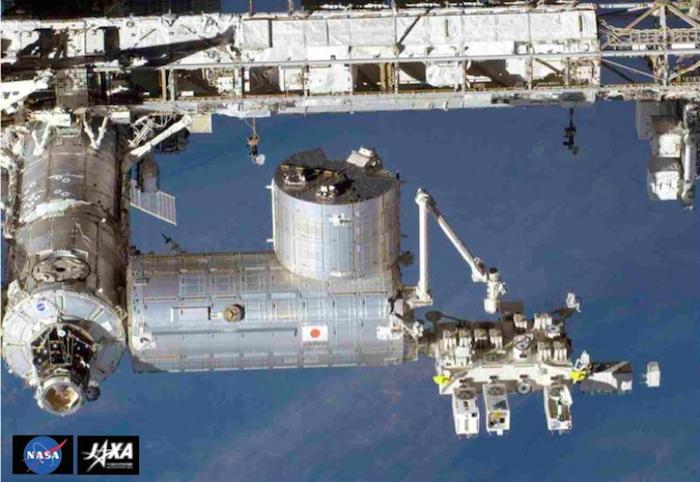 After berthing with the ISS, CALET was extracted by robotic arm from the Japanese HTV-5 transfer vehicle and installed on the Japanese Exposure Facility (right) where it will start its first data-taking (Image: NASA/JAXA)
-
Five days after it launched from the Tanegashima Space Center on board the HTV-5 Transport Module, operated by the Japan Aerospace Exploration Agency (JAXA), the CALorimetric Electron Telescope (CALET) docked at the International Space Station (ISS). The instrument, now in the check-out phase, is sending its first signals back from the Space Station.
CALET is the space mission lead by JAXA with the participation of the Italian Space Agency (ASI) and NASA. It is a CERN recognized experiment and the second high-energy astroparticle experiment to be installed on the ISS after AMS-02, which is taking data from the remote station since 2011. Designed as a space observatory for long-term observations of cosmic radiation aboard the external platform JEM-EF of the Japanese module (KIBO) on the ISS, CALET aims at identifying electrons, nuclei and gamma-rays coming from space and measure their energies with high-resolution. “One of the main scientific objectives of CALET is to measure the detailed shape of the electron spectrum above 1 TeV,” says Shoji Torii of Waseda University in Tokyo, Principal Investigator (PI) of  CALET. “This unexplored region is gaining a growing interest by the scientific community as it might be able to show for the first time the smoking gun of the presence of nearby astronomical source(s) where electrons are accelerated. We know that electrons cannot travel for long distances as they quickly lose their energy. Therefore, they are expected to originate relatively near to Earth – about 1 Kpc.”
CALET will perform accurate measurements of the electron energy spectrum from 1 GeV to 20 TeV. “The high end of the spectrum could be particularly interesting as it could help resolve the controversial interpretation of the electron and positron spectra measured by AMS-02 and could provide a clue on possible signatures of dark matter,” says John Wefel of Louisiana State University, Co-PI of the CALET project and lead of the American team participating in CALET.
CALET could also help explain the deviation from a pure power-law that was recently observed by the AMS-02 collaboration in the energy spectra of light nuclei. “Thanks to its excellent energy resolution and ability to identify cosmic nuclei from hydrogen to iron and above,” says Pier Simone Marrocchesi, Co-PI of the CALET collaboration and head of the Italian team. “CALET will be able to extend the present data to higher energies and measure accurately the curvature of the spectrum and the position of the spectral break-point for individual nuclear species. The calibration of the two calorimetric instruments is the key to control the energy scale and this is why we performed several calibration tests at CERN.”
After berthing with the ISS, CALET was extracted by a robotic arm from the Japanese H-II transfer vehicle (HTV5) and installed on the JEM-EF where it will start a first data-taking period of 5 years.
Quelle: CERN
Raumfahrt
2662 Views
Created with page4