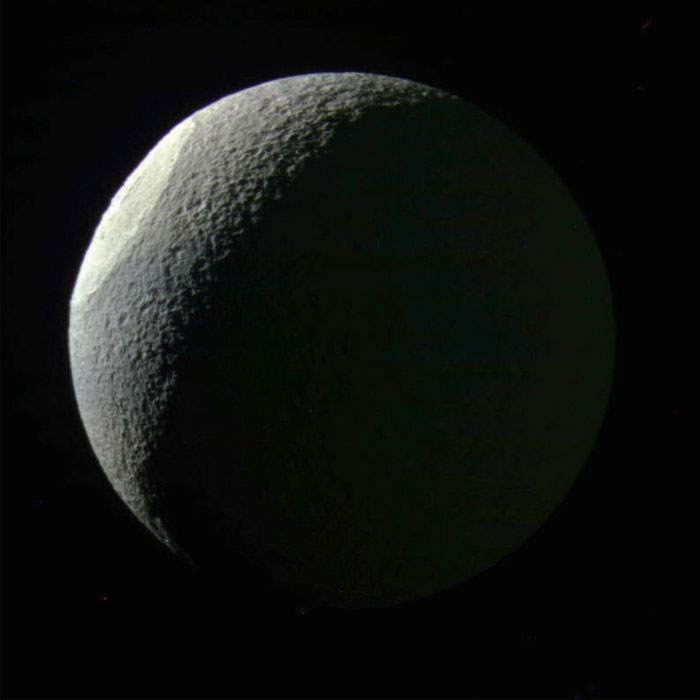 With the expanded range of colors visible to Cassini's cameras, differences in materials and their textures become apparent that are subtle or unseen in natural color views. Here, the giant impact basin Odysseus on Saturn's moon Tethys stands out brightly from the rest of the illuminated icy crescent. This distinct coloration may result from differences in either the composition or structure of the terrain exposed by the giant impact. Odysseus (280 miles, or 450 kilometers, across) is one of the largest impact craters on Saturn's icy moons, and may have significantly altered the geologic history of Tethys.
Tethys' dark side (at right) is faintly illuminated by reflected light from Saturn.
Images taken using ultraviolet, green and infrared spectral filters were combined to create this color view. North on Tethys (660 miles or 1,062 kilometers across) is up in this view.
The view was acquired on May 9, 2015 at a distance of approximately 186,000 miles (300,000 kilometers) from Tethys. Image scale is 1.1 mile (1.8 kilometers) per pixel.
Quelle: NASA
.
Update: 29.07.2015
. 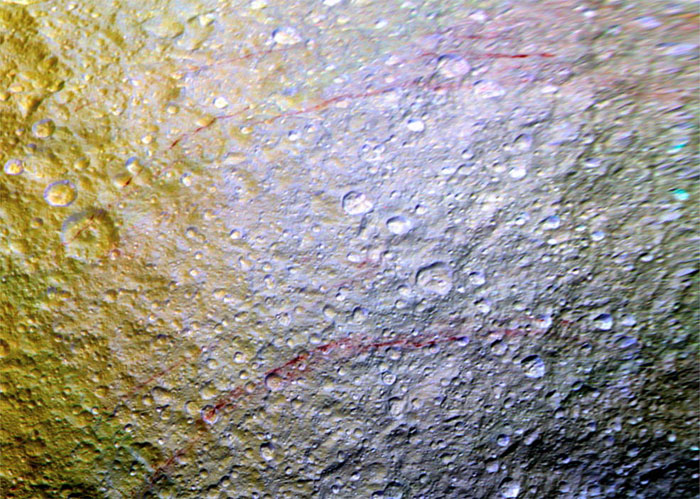 Unusual arc-shaped, reddish streaks cut across the surface of Saturn's ice-rich moon Tethys in this enhanced-color mosaic. The red streaks are narrow, curved lines on the moon's surface, only a few miles (or kilometers) wide but several hundred miles (or kilometers) long. The red streaks are among the most unusual color features on Saturn's moons to be revealed by Cassini's cameras.
.
Like graffiti sprayed by an unknown artist, unexplained arc-shaped, reddish streaks are visible on the surface of Saturn's icy moon Tethys in new, enhanced-color images from NASA's Cassini spacecraft.
The red arcs are narrow, curved lines on the moon's surface, and are among the most unusual color features on Saturn's moons to be revealed by Cassini's cameras.
Images taken using clear, green, infrared and ultraviolet spectral filters were combined to create the enhanced-color views, which highlight subtle color differences across the icy moon's surface at wavelengths not visible to human eyes.
A few of the red arcs can be seen faintly in observations made earlier in the Cassini mission, which has been in orbit at Saturn since 2004. But the color images for this observation, obtained in April 2015, are the first to show large northern areas of Tethys under the illumination and viewing conditions necessary to see the arcs clearly. As the Saturn system moved into its northern hemisphere summer over the past few years, northern latitudes have become increasingly well illuminated. As a result, the arcs have become clearly visible for the first time.
"The red arcs really popped out when we saw the new images," said Cassini participating scientist Paul Schenk of the Lunar and Planetary Institute in Houston. "It's surprising how extensive these features are."
The origin of the features and their reddish color is a mystery to Cassini scientists. Possibilities being studied include ideas that the reddish material is exposed ice with chemical impurities, or the result of outgassing from inside Tethys. They could also be associated with features like fractures that are below the resolution of the available images.
Except for a few small craters on Saturn's moon Dione, reddish-tinted features are rare on other moons of Saturn. Many reddish features do occur, however, on the geologically young surface of Jupiter's moon Europa.
"The red arcs must be geologically young because they cut across older features like impact craters, but we don't know their age in years." said Paul Helfenstein, a Cassini imaging scientist at Cornell University, Ithaca, New York, who helped plan the observations. "If the stain is only a thin, colored veneer on the icy soil, exposure to the space environment at Tethys' surface might erase them on relatively short time scales."
The Cassini team is currently planning follow-up observations of the features, at higher resolution, later this year.
"After 11 years in orbit, Cassini continues to make surprising discoveries," said Linda Spilker, Cassini project scientist at NASA's Jet Propulsion Laboratory in Pasadena, California. "We are planning an even closer look at one of the Tethys red arcs in November to see if we can tease out the source and composition of these unusual markings."
. 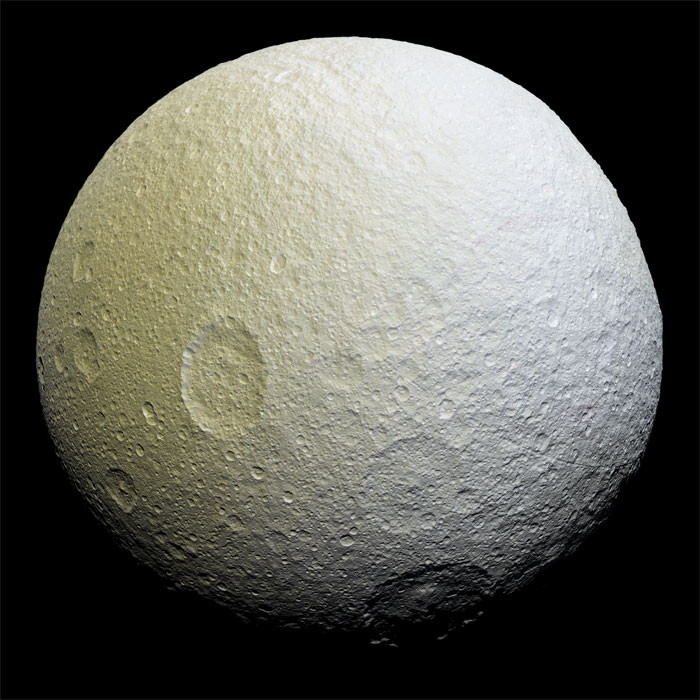 This enhanced-color mosaic of Saturn's icy moon Tethys shows a range of features on the moon's trailing hemisphere. Tethys is tidally locked to Saturn, so the trailing hemisphere is the side of the moon that always faces opposite its direction of motion as it orbits the planet.
. 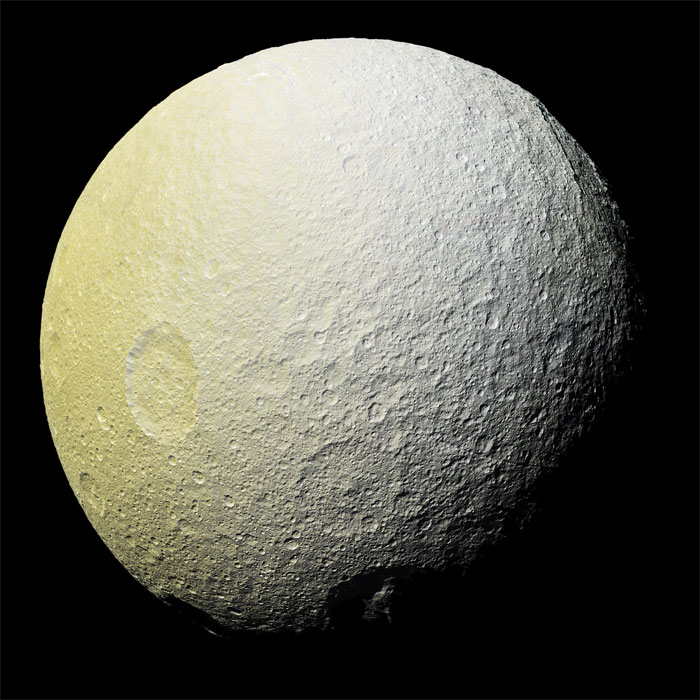