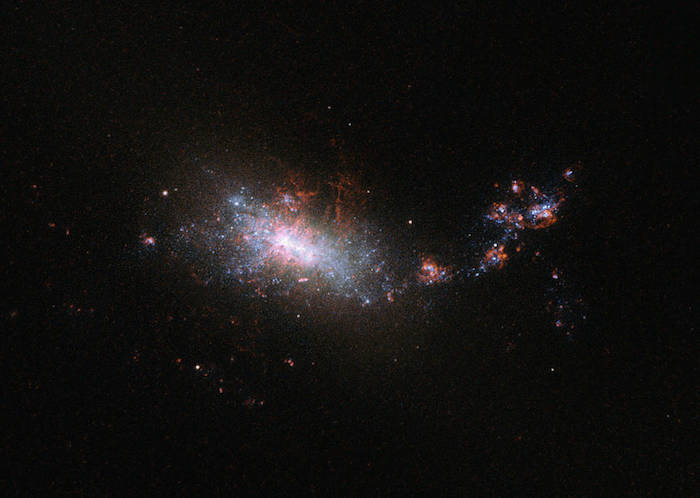 This dramatic image shows the NASA/ESA Hubble Space Telescope’s view of dwarf galaxy known as NGC 1140, which lies 60 million light-years away in the constellation of Eridanus. As can be seen in this image NGC 1140 has an irregular form, much like the Large Magellanic Cloud — a small galaxy that orbits the Milky Way.
This small galaxy is undergoing what is known as a starburst. Despite being almost ten times smaller than the Milky Way it is creating stars at about the same rate, with the equivalent of one star the size of our sun being created per year. This is clearly visible in the image, which shows the galaxy illuminated by bright, blue-white, young stars.
Galaxies like NGC 1140 — small, starbursting and containing large amounts of primordial gas with far fewer elements heavier than hydrogen and helium than are present in our sun — are of particular interest to astronomers. Their composition makes them similar to the intensely star-forming galaxies in the early Universe. And these early Universe galaxies were the building blocks of present-day large galaxies like our galaxy, the Milky Way. But, as they are so far away these early Universe galaxies are harder to study so these closer starbursting galaxies are a good substitute for learning more about galaxy evolution.
The vigorous star formation will have a very destructive effect on this small dwarf galaxy in its future. When the larger stars in the galaxy die, and explode as supernovae, gas is blown into space and may easily escape the gravitational pull of the galaxy. The ejection of gas from the galaxy means it is throwing out its potential for future stars as this gas is one of the building blocks of star formation. NGC 1140’s starburst cannot last for long.
Image credit: ESA/Hubble & NASA
Text credit: European Space Agency
Astronomie
2245 Views
Created with page4