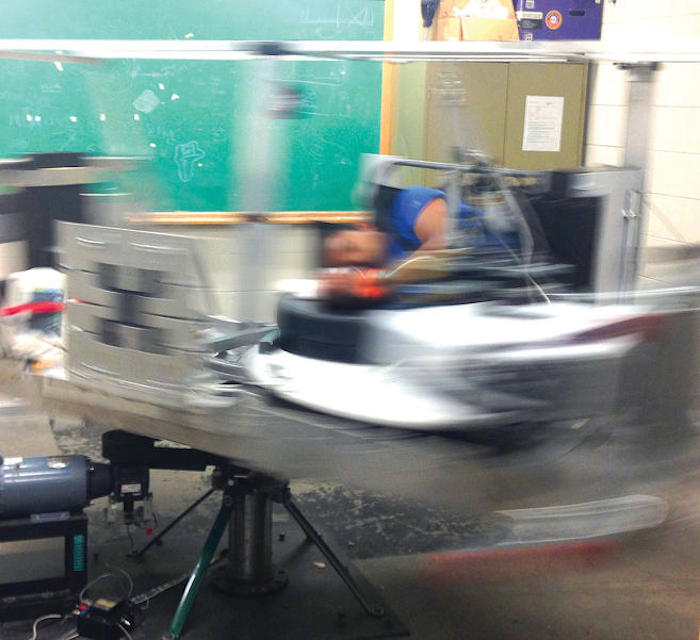 he mobile centrifuge machine, which creates gravity, in motion in a classroom. It is tilted on one side to counteract the effects of gravity on Earth. A person pedals while sitting on a seat, their head pointed towards the centre of the machine.
CREDIT: ANA DIAZ, MIT
-
Astronauts floating in zero gravity can act like Superman, lifting 200-kilogram weights with one hand while flying through the International Space Station. But weightlessness has a dark side. Without gravity to anchor them, astronauts lose muscle and bone.
Could we take gravity with us when we venture into space? Ana Diaz at the Massachusetts Institute of Technology and her team think we can.
In a module small enough to fit inside the space station, they’ve built an exercise bike in a spinning human centrifuge, which simulates gravity and recreates the forces you’d experience cycling on Earth. The team published the invention in Acta Astronautica in April.
“Generally I think the idea is very good, because it combines training with gravity – which is exactly what you want to do,” says Oliver Opatz, a physiologist at the Centre of Space Medicine and Extreme Environments in Berlin.
Without the pressure of gravity or high-impact exercise, your body’s muscles and bones waste away (bones lose up to 1% of their mass per month, while muscles lose up to 5% per week). When bones suffer, so does the immune system, because bone marrow is where many immune cells are made. And without gravity, the body’s fluids seep upwards and accumulate, placing extra strain on the heart.
To counteract these side effects, space station astronauts – who usually stay in space for six months – exercise two hours each day and take supplements such as Vitamin D to prevent bone loss. Even so, they experience illness and general weakness for months after returning to Earth.
So scientists have looked at ways to create gravity in space. In 2011 NASA engineers devised the spaceship Nautilus-X  in which habitat modules are attached to a giant donut-shaped centrifuge that spins to create a sensation of gravity – somewhat like the spaceship Discovery One in Stanley Kubrick’s 1968 film 2001: A Space Odyssey.
But the Nautilus-X  design is still at the concept stage. And with NASA earmarking the 2030s for its first manned missions to Mars, space agencies around the world are looking for simpler ways to keep astronauts in shape.
A “lower body negative pressure” chamber has already been tested on the space station and Russia’s Mir Space Station to treat the fluid accumulation problem. Astronauts stand inside a cylinder that seals around their waist and draws blood back to their feet – it resembles being strapped into a giant vacuum cleaner hose.
. 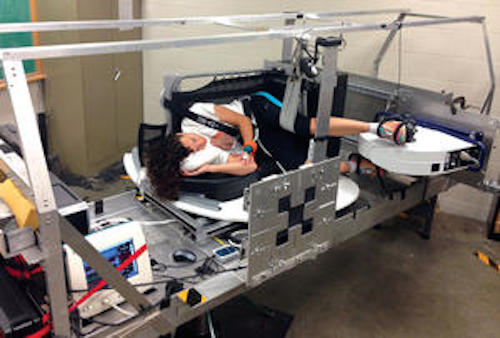 A person strapped into the seat of the mobile centrifuge, their feet on the pedals below.
.
And to tackle muscle and bone loss, there's Diaz’s exercise bike.
To test the device on Earth, the team tipped the centrifuge over, like a hamster wheel laid on its side, so that Earth’s gravity wouldn’t affect the result. Participants were strapped so their head pointed towards the centre. As the centrifuge accelerated, they felt G-forces push them down feet-first. And the faster the centrifuge spun, the heavier the gravity the cyclists experienced.
Diaz found that as the gravity became stronger, the force recorded by the pedals increased, bringing greater health benefits. “We know higher foot forces are good for bones, and help you generate more bone,” she says. She also found that when the centriguge spun faster the subjects’ heart rate increased. She next wants to study the long-term cardiovascular benefits of exercise in simulated gravity.
Once the astronauts reach Mars - where gravity is 62% less than on Earth -  the gravity problem will remain. Diaz thinks exercise centrifuges may form part of the daily routine for permanent colonists.
Thais Russomano, a space medicine expert at London’s Kings College who is working on a similar centrifuge, says it may be possible for colonists to 3D-print parts of the equipment on site using materials at hand, such as sand. The process is already being investigated to produce construction materials for housing on Mars.
Opatz believes exercising in artificial gravity will be essential for the successful arrival of the first Mars astronauts – if only to get them used to feeling gravity after six months in space. “There’s no rescue team on Mars,” he says. “If they get out of the capsule and faint, then that’s it!”
Quelle: COSMOS
Raumfahrt
« Zum vorherigen Eintrag Zum nächsten Eintrag »
2557 Views
Created with page4