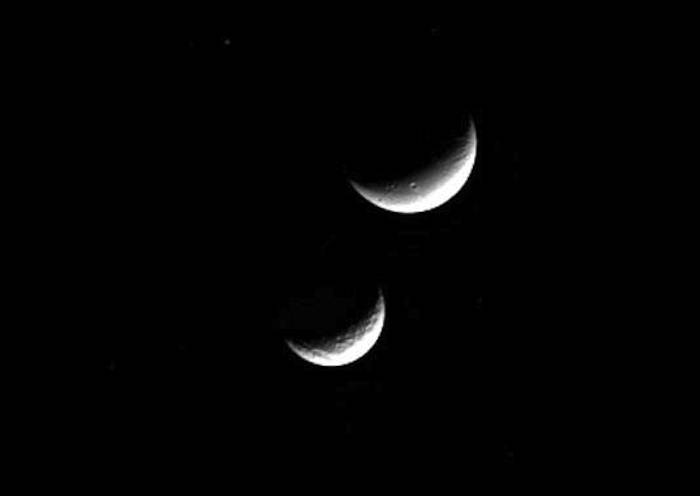 In Greek mythology, Dione was the daughter of Tethys, so we should perhaps not be surprised to see the two eponymous moons together.
In reality, the moons Tethys (660 miles or 1062 kilometers across) and Dione (698 miles or 1123 kilometers across) are not mother and daughter in any sense. They are perhaps more like sisters since scientists believe that they formed out of the same disk around an early Saturn.
Dione in this image is the upper moon, while Tethys is the lower.
This view looks toward the anti-Saturn side of Dione. North on Dione is up. The image was taken in visible light with the Cassini spacecraft narrow-angle camera on April 4, 2015.
The view was obtained at a distance of approximately 1.5 million miles (2.4 million kilometers) from Dione. Image scale is 9 miles (14 kilometers) per pixel.
The Cassini mission is a cooperative project of NASA, ESA (the European Space Agency) and the Italian Space Agency. The Jet Propulsion Laboratory, a division of the California Institute of Technology in Pasadena, manages the mission for NASA's Science Mission Directorate, Washington. The Cassini orbiter and its two onboard cameras were designed, developed and assembled at JPL. The imaging operations center is based at the Space Science Institute in Boulder, Colorado.
Quelle: NASA
Raumfahrt
« Zum vorherigen Eintrag Zum nächsten Eintrag »
2377 Views
Created with page4