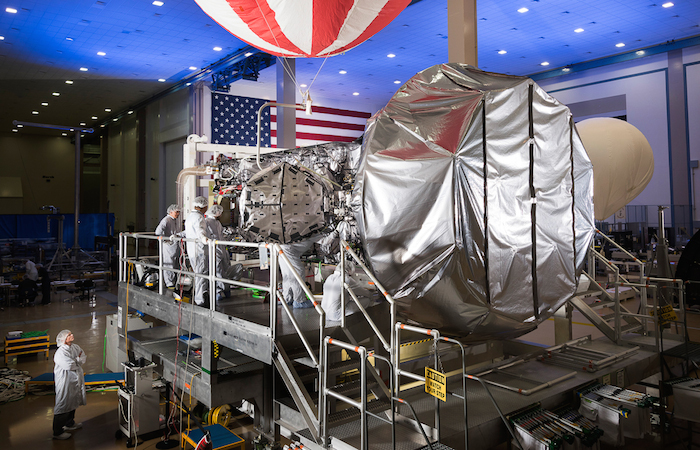 The third in a Lockheed Martin-built five-ship fleet for a next-generation, narrowband tactical military satellite communications system was officially accepted by the U.S. Navy this week, following successful completion of the satellite’s on-orbit testing. Launched on Jan. 20, the 7.5-ton Mobile User Objective System-3 (MUOS-3) extends a new, secure military communications network (MUOS) for U.S. military forces on the move, expanding the network’s coverage now over more than three-quarters of the planet, and now the satellite is ready to go operational.
“MUOS is a game-changer in communications for every branch of our military, which all have mobile users who will benefit from these new capabilities,” said Iris Bombelyn, Lockheed Martin’s vice president for narrowband communications. “This latest satellite will expand the MUOS network’s coverage over more than three-quarters of the globe, including significantly more coverage north and south than the current legacy voice-only system.”
With on-orbit testing complete, the Navy will now relocate MUOS-3 to its 22,000-mile-high, on-orbit operational slot over the Atlantic Ocean in preparation for operational acceptance (MUOS-1 and MUOS-2 are located over the Pacific).
MUOS operates like a “smart phone cell tower in the sky,” supporting a worldwide, multi-service population of users in the UHF band, providing increased communications capabilities to smaller terminals while still supporting interoperability with legacy terminals. The new military SATCOM system will, for the first time, give MUOS Wideband Code Division Multiple Access technology users beyond-line-of-sight capability to transmit and receive voice and data using an Internet Protocol-based system, giving users greater mobility, higher data rates, and improved operational availability.
By operating in the UHF frequency band, which is lower than that used by conventional cellular networks, MUOS will provide U.S. and allied warfighters with the tactical ability to communicate in “disadvantaged” environments, including heavily forested areas where higher-frequency signals would be otherwise impaired. Even troops in buildings with no satellite access are expected to see an increase in communications capability.
The size of MUOS is a result of the nature of the size of the UHF waveform, and its weight is due to the fact that—besides requiring bigger hardware for UHF—it will be going to GEO for an expected 15 years of operation, and so it needs a lot of fuel. At 15,000 pounds, MUOS-3 is the heaviest payload to launch atop the United Launch Alliance (ULA) Atlas-V rocket to date.
MUOS is an IP-based communications protocol based on 3G, which gives military users on the move more communications capability over existing systems, including simultaneous voice, video, and data—similar to the capabilities experienced today with smart phones, providing users with 10 times more communications capacity.
With MUOS-3 nearly ready to go operational Lockheed is busy preparing the next satellite of the constellation for launch, MUOS-4, which is currently in final assembly and testing at Lockheed’s satellite manufacturing facility in Sunnyvale, Calif. Once ready the satellite will fly to Florida on a C-5 Galaxy (courtesy of the 60th Air Mobility Wing of Travis Air Force Base) for final preparations and launch, which will take place from Cape Canaveral Air Force Station Space Launch Complex-41 (SLC-41) atop a ULA Atlas-V 551 rocket—the most powerful configuration of the Atlas-V.
Launch is currently scheduled for late-summer/fall this year.
“This third MUOS is another major step toward achieving a fully operational MUOS end-to-end capability by 2016,” said Navy Capt. Joseph Kan, the MUOS program manager. “The Navy, in close collaboration with the Army, Air Force and our industry partners, is bringing the future of worldwide mobile satellite communications into reality for the United States and potentially allied nations.”
A total of five MUOS satellites will make up the MUOS fleet, but only four will actually be required to put the whole system into action. The fifth and final MUOS to launch in 2016 will serve as an on-orbit spare, should any of the first four lose their capabilities.
The entire MUOS constellation is expected to become fully operational in 2016.
Quelle: AS
---
Update: 30.06.2015
. 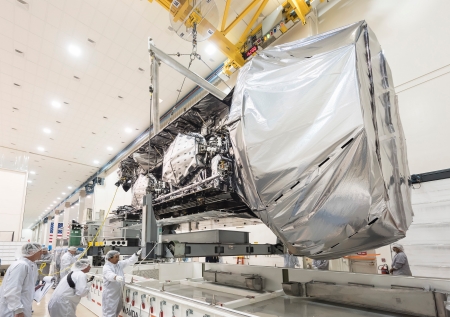 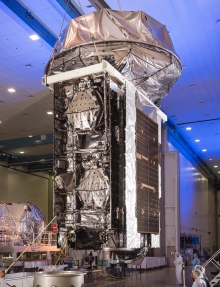 Delivered by the U.S. Navy and Lockheed Martin (LMT), the fourth Mobile User Objective System (MUOS) satellite arrived at Cape Canaveral Air Force Station, Florida, yesterday prior to its expected August launch aboard a United Launch Alliance Atlas V rocket.
MUOS-4 is the latest addition to a network of orbiting satellites and relay ground stations that is revolutionizing secure communications for mobile military forces. Users with operational MUOS terminals can seamlessly connect beyond line-of-sight around the globe. MUOS' new smart phone-like capabilities include simultaneous crystal-clear voice, and video and mission data, on a high-speed Internet Protocol-based system.
Traditional UHF satellite communication systems allow users to 'talk' as long as they are geographically close enough to be under the coverage footprint of the same satellite.
"MUOS allows troops all over the world to talk, text and share mission data seamlessly, while traveling, like a cellular network, without having to worry about where they are in relation to a satellite," said Iris Bombelyn, Lockheed Martin's vice president for narrowband communications. "MUOS-4 will complete our near global coverage, reaching further north and south toward the poles than ever before."
Manufactured at Lockheed Martin's Sunnyvale, California facility, MUOS-4 was shipped from nearby Moffett Federal Airfield, where the 60th Air Mobility Wing of Travis Air Force Base loaded the satellite aboard a C-5 Galaxy aircraft for delivery. In Florida, Astrotech Space Operations, a wholly-owned subsidiary of Lockheed Martin, will complete MUOS-4's pre-launch processing.The MUOS network is expected to be operational by year-end. MUOS-1, MUOS-2 and MUOS-3 launched respectively in 2012, 2013 and January 2015. All four required MUOS ground stations are complete. More than 55,000 currently fielded radio terminals can be upgraded to be MUOS-compatible, with many of them requiring just a software upgrade.
Quelle: Lockheed Martin