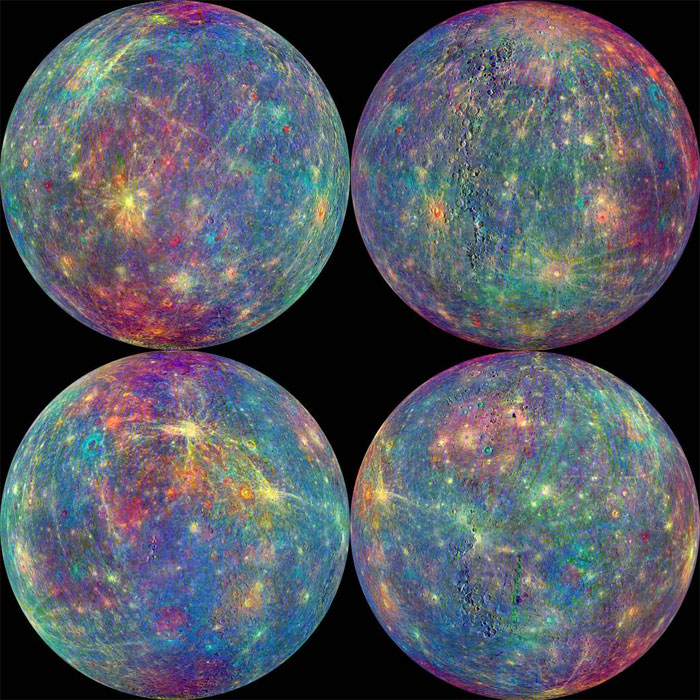 The Mercury Atmosphere and Surface Composition Spectrometer (MASCS) instrument aboard NASA's MESSENGER spacecraft was designed to study both the exosphere and surface of the planet Mercury. To learn more about the minerals and surface processes on Mercury, the Visual and Infrared Spectrometer (VIRS) portion of MASCS has been diligently collecting single tracks of spectral surface measurements since MESSENGER entered Mercury orbit on March 17, 2011. The track coverage is now extensive enough that the spectral properties of both broad terrains and small, distinct features such as pyroclastic vents and fresh craters can be studied. To accentuate the geological context of the spectral measurements, the MASCS data have been overlain on the monochrome mosiac from the Mercury Dual Imaging System (MDIS), an instrument with wide- and narrow-angle cameras to map the rugged landforms and spectral variations on Mercury’s surface.
The MESSENGER spacecraft is the first ever to orbit the planet Mercury, and the spacecraft's seven scientific instruments and radio science investigation are unraveling the history and evolution of the solar system's innermost planet. In the mission's more than four years of orbital operations, MESSENGER has acquired over 250,000 images and extensive other data sets. MESSENGER's highly successful orbital mission is about to come to an end, as the spacecraft runs out of propellant and the force of solar gravity causes it to impact the surface of Mercury near the end of April 2015.
Image Credit: NASA/Johns Hopkins University Applied Physics Laboratory/Carnegie Institution of Washington
Quelle: NASA
Astronomie
2242 Views
Created with page4