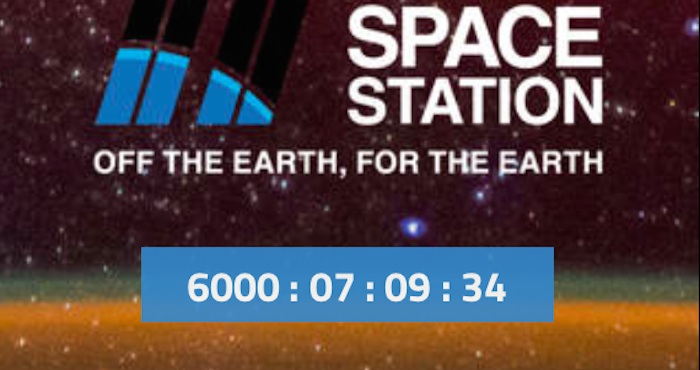 About the Space Station: Facts and Figures
The International Space Station is a unique place – a convergence of science, technology and human innovation that demonstrates new technologies and makes research breakthroughs not possible on Earth.
It is a microgravity laboratory in which an international crew of six people live and work while traveling at a speed of five miles per second, orbiting Earth every 90 minutes.
The space station has been continuously occupied since November 2000. In that time, more than 200 people from 15 countries have visited.
Crew members spend about 35 hours each week conducting research in many disciplines to advance scientific knowledge in Earth, space, physical, and biological sciences for the benefit of people living on our home planet.
The station facilitates the growth of a robust commercial market in low-Earth orbit, operating as a national laboratory for scientific research and facilitating the development of U.S. commercial cargo and commercial crew space transportation capabilities.
More than an acre of solar arrays provide power to the station, and also make it the next brightest object in the night sky after the moon. You don’t even need a telescope to see it zoom over your house. And we’ll even send you a text message or email alert to let you know when (and where) to look up, spot the station, and wave!
The space station remains the springboard to NASA's next great leap in exploration, enabling research and technology developments that will benefit human and robotic exploration of destinations beyond low-Earth orbit, including asteroids and Mars. It is the blueprint for global cooperation – one that enables a multinational partnership and advances shared goals in space exploration.
. 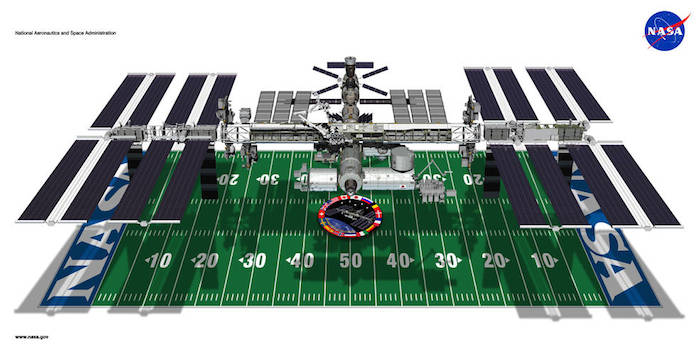 Image above: The International Space Station's length and width is about the size of a football field.
Credits: NASA
. 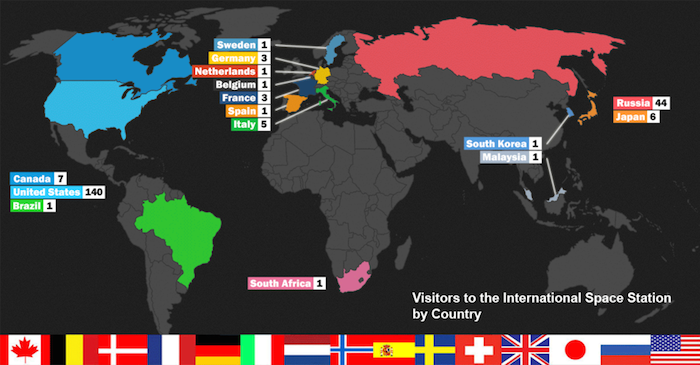 Visitors to the International Space Station by Country
Credits: NASA
. 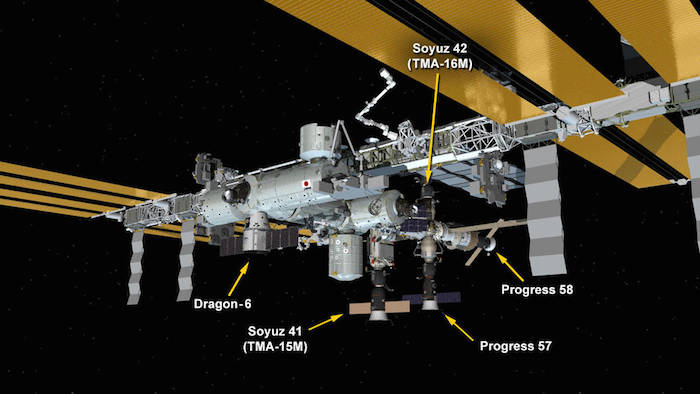 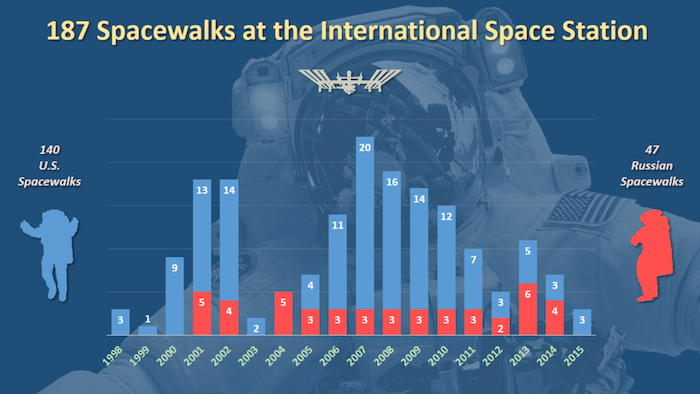 There have been 187 International Space Station spacewalks
Credits: NASA
. 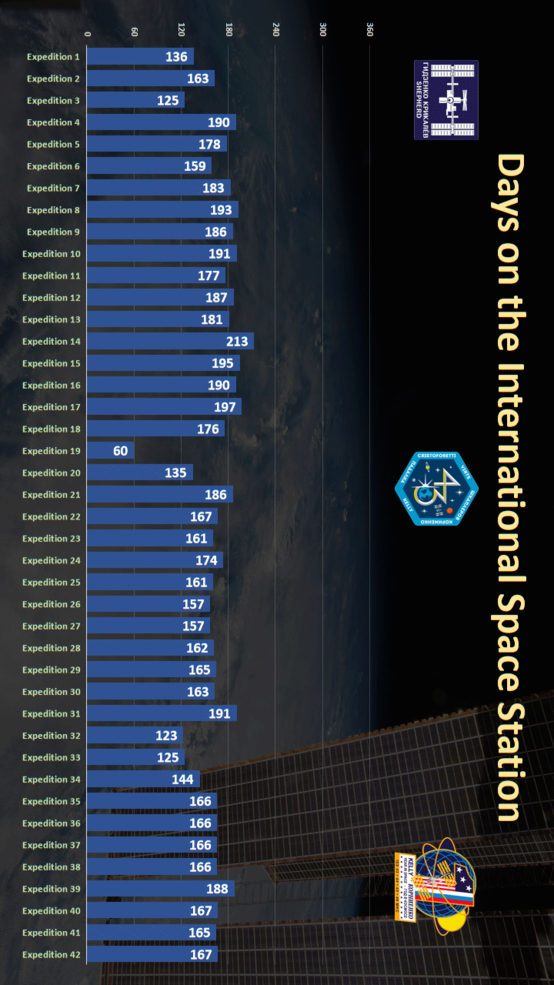 Space station crews, also known as Expeditions, typically stay in space for about 5-1/2 months. However, two crew members, NASA astronaut Scott Kelly and Roscosmos cosmonaut Mikhail Kornienko, are living and working in space for one year until March 2016.
Credits: NASA
.
International Space Station at Completion
The ISS solar array surface area could cover the U.S. Senate Chamber three times over.
ISS is larger than a six-bedroom house.
ISS has an internal pressurized volume of 32,333 cubic feet, or equal that of a Boeing 747.
The solar array wingspan (240 feet) is longer than that of a Boeing 777 200/300 model, which is 212 feet.
Fifty-two computers control the systems on the ISS.
More than 115 space flights were conducted on five different types of launch vehicles over the course of the station’s construction.
More than 100 telephone-booth-sized rack facilities can be in the ISS for operating the spacecraft systems and research experiments.
The ISS is almost four times as large as the Russian space station Mir and about five times as large as the U.S. Skylab.
The ISS weighs almost one million pounds (approximately 925,000 pounds). That’s the equivalent of more than 320 automobiles.
The ISS measures 357 feet end-to-end. That’s equivalent to the length of a football field including the end zones (well, almost – a football field is 360 feet).
3.3 million lines of software code on the ground support 1.8 million lines of flight software code.
Eight miles of wire connects the electrical power system.
In the International Space Station’s U.S. segment alone, 1.5 million lines of flight software code run on 44 computers communicating via 100 data networks transferring 400,000 signals (e.g. pressure or temperature measurements, valve positions, etc.).
The ISS manages 20 times as many signals as the space shuttle.
Main U.S. control computers have 1.5 gigabytes of total main hard drive storage in the U.S. segment compared to modern PCs, which have ~500 gigabyte hard drives.
The entire 55-foot robot arm assembly is capable of lifting 220,000 pounds, which is the weight of a space shuttle orbiter.
The 75 to 90 kilowatts of power for the ISS is supplied by an acre of solar panels.
International Space Station Size & Mass
Module Length: 167.3 feet (51 meters)
Truss Length: 357.5 feet (109 meters)
Solar Array Length: 239.4 feet (73 meters)
Mass: 924,739 pounds (419,455 kilograms)
Habitable Volume: 13,696 cubic feet (388 cubic meters)
Pressurized Volume: 32,333 cubic feet (916 cubic meters)
Power Generation: 8 solar arrays = 84 kilowatts
Lines of Computer Code: approximately 2.3 million
. 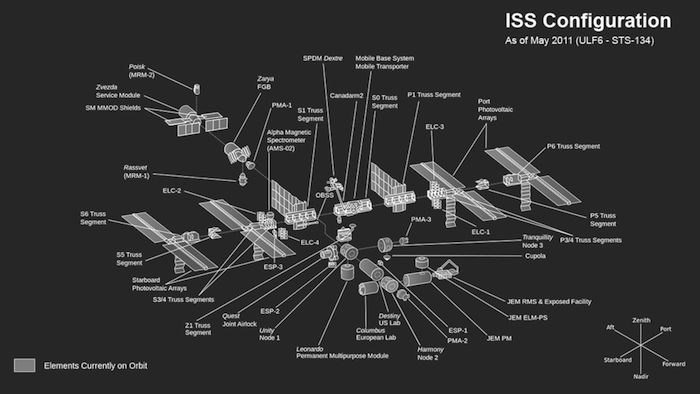