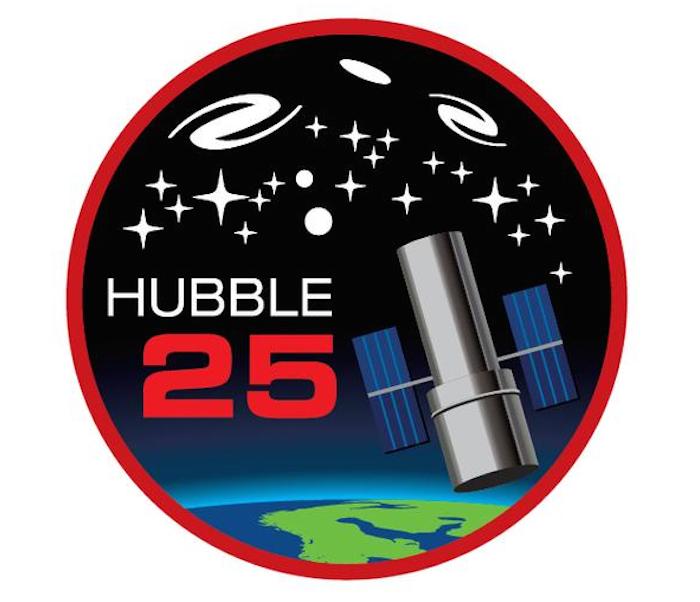 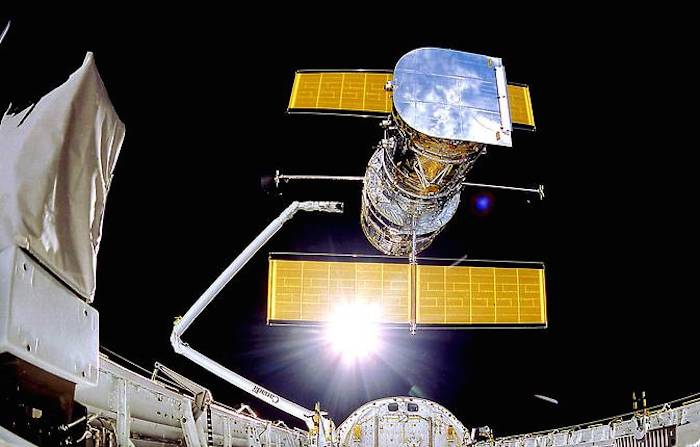 NASA's Hubble Space Telescope is suspended in space by Discovery's Remote Manipulator System following the deployment of part of its solar panels and antennae on April 25, 1990.
Image Credit: NASA 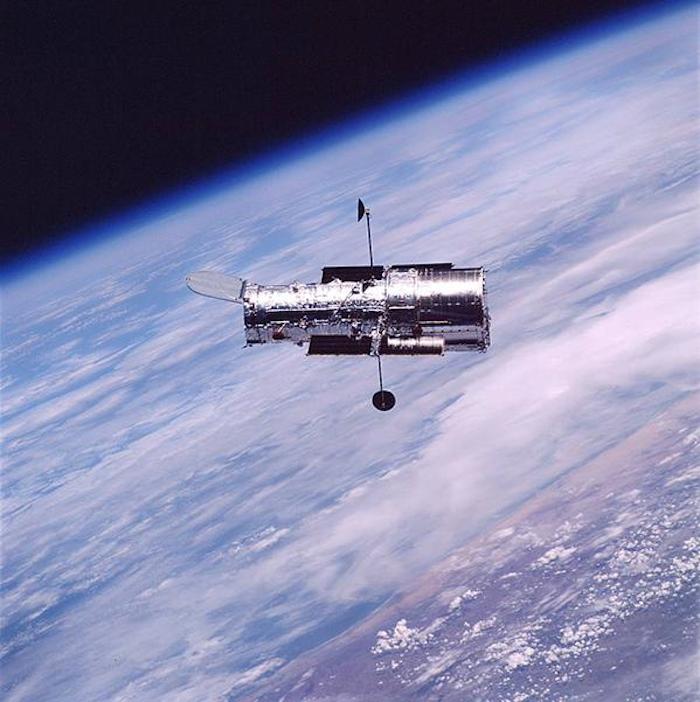 he brilliant tapestry of young stars flaring to life resemble a glittering fireworks display in the 25th anniversary NASA Hubble Space Telescope image, released to commemorate a quarter century of exploring the solar system and beyond since its launch on April 24, 1990.
“Hubble has completely transformed our view of the universe, revealing the true beauty and richness of the cosmos” said John Grunsfeld, astronaut and associate administrator of NASA’s Science Mission Directorate. “This vista of starry fireworks and glowing gas is a fitting image for our celebration of 25 years of amazing Hubble science.”
The sparkling centerpiece of Hubble’s anniversary fireworks is a giant cluster of about 3,000 stars called Westerlund 2, named for Swedish astronomer Bengt Westerlund who discovered the grouping in the 1960s. The cluster resides in a raucous stellar breeding ground known as Gum 29, located 20,000 light-years away from Earth in the constellation Carina.
- 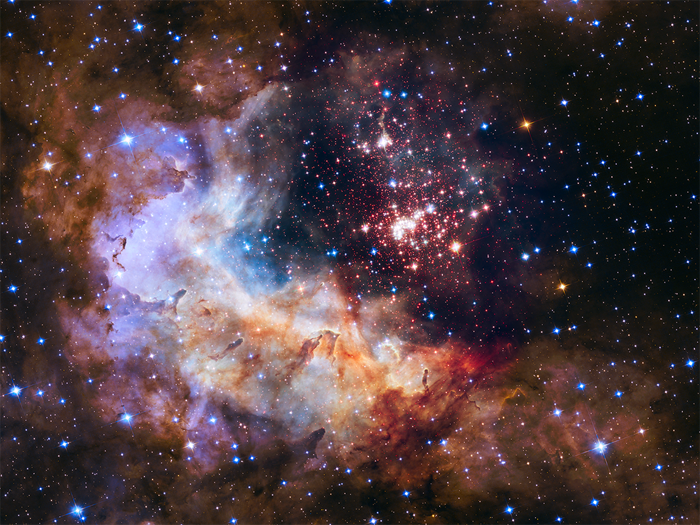 To capture this image, Hubble’s near-infrared Wide Field Camera 3 pierced through the dusty veil shrouding the stellar nursery, giving astronomers a clear view of the nebula and the dense concentration of stars in the central cluster. The cluster measures between 6 and 13 light-years across.
The giant star cluster is about 2 million years old and contains some of our galaxy’s hottest, brightest and most massive stars. Some of its heftiest stars unleash torrents of ultraviolet light and hurricane-force winds of charged particles etching into the enveloping hydrogen gas cloud.
The nebula reveals a fantasy landscape of pillars, ridges and valleys. The pillars, composed of dense gas and thought to be incubators for new stars, are a few light-years tall and point to the central star cluster. Other dense regions surround the pillars, including reddish-brown filaments of gas and dust.
The brilliant stars sculpt the gaseous terrain of the nebula and help create a successive generation of baby stars. When the stellar winds hit dense walls of gas, the shockwaves may spark a new torrent of star birth along the wall of the cavity. The red dots scattered throughout the landscape are a rich population of newly-forming stars still wrapped in their gas-and-dust cocoons. These tiny, faint stars are between 1 million and 2 million years old -- relatively young stars -- that have not yet ignited the hydrogen in their cores. The brilliant blue stars seen throughout the image are mostly foreground stars.
-
Video: Flight to Star Cluster Westerlund 2 :  https://www.youtube.com/watch?v=H5MwOCgzQ6M
-
Because the cluster is very young -- in astronomical terms -- it has not had time to disperse its stars deep into interstellar space, providing astronomers with an opportunity to gather information on how the cluster formed by studying it within its star-birthing environment.
The image’s central region, which contains the star cluster, blends visible-light data taken by Hubble’s Advanced Camera for Surveys with near-infrared exposures taken by the Wide Field Camera 3. The surrounding region is composed of visible-light observations taken by the Advanced Camera for Surveys. Shades of red represent hydrogen and bluish-green hues are predominantly oxygen.
The Hubble Space Telescope is a project of international cooperation between NASA and ESA (European Space Agency). NASA's Goddard Space Flight Center in Greenbelt, Maryland, manages the telescope. The Space Telescope Science Institute (STScI) in Baltimore, Maryland, conducts Hubble science operations. STScI is operated for NASA by the Association of Universities for Research in Astronomy in Washington.
Quelle: NASA