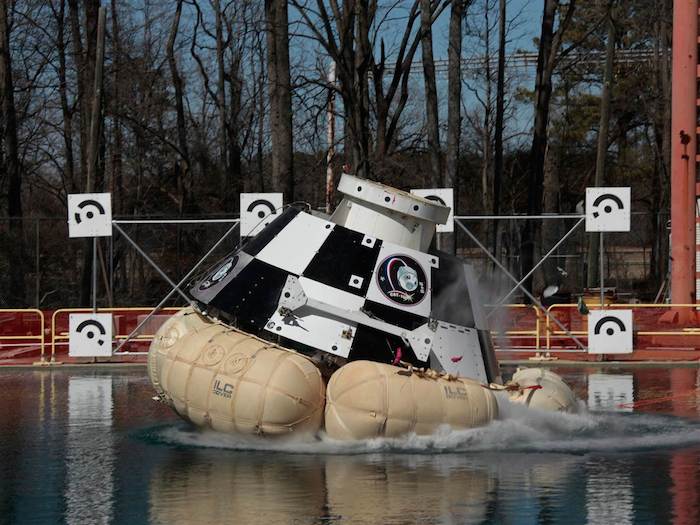 Boeing's CST-100 crew capsule is supposed to touch down on land when it carries crews of astronauts back down to Earth from the International Space Station — but NASA still wants to make sure the spaceship will be shipshape in the event of an emergency water landing. So, on Thursday, a CST-100 prototype was put through its watery paces during a drop into a glorified swimming pool at NASA's Langley Research Center in Virginia.
How did the test turn out? NASA reported in a tweet that the capsule made a "big splash" in Langley's Hydro Impact Basin. No astronauts were inside the capsule for Thursday's test — but one day, that'll change.
Thursday's abort test is part of the effort to develop U.S.-made "space taxis" capable of carrying astronauts to and from the space station — and avoid having to pay the Russians upwards of $70 million a seat for rides into orbit. While the Boeing Co. builds and tests the CST-100, SpaceX is working on a crew-carrying version of its Dragon capsule. If those two companies stay on schedule, aided by $6.8 billion in support from NASA, both the CST-100 and the Dragon will be making a splash in space by 2017.
Quelle: NBC
Raumfahrt
« Zum vorherigen Eintrag Zum nächsten Eintrag »
2466 Views
Created with page4