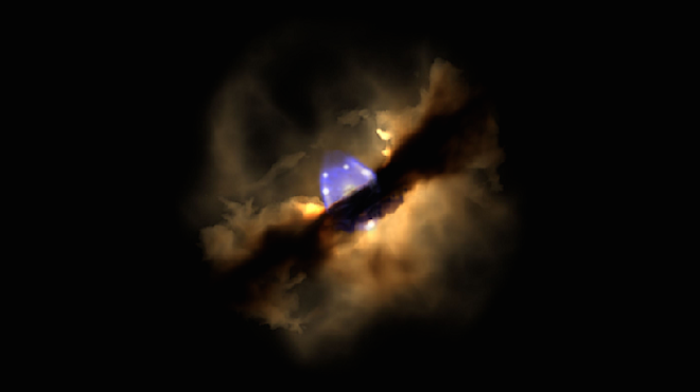 Data from 1996 - illustrated here as a 3D simulation - showed a compact, round blast of wind (in blue)

Astronomers have witnessed a key stage in the birth of a very heavy star, using two radio telescope views of the process taken 18 years apart.
The young star is 4,200 light-years from Earth and appears to be surrounded by a doughnut-shaped cloud of dust.
That cloud slows down the hot, ionised wind that the star blasts into space, causing it to form an elongated column perpendicular to the dusty ring.
The new results represent "before and after" glimpses of that column forming.
They were captured by the Very Large Array, a battery of 27 antennae in the New Mexico desert, and are published in the journal Science.
"The comparison is remarkable," said first author Carlos Carrasco-Gonzalez, from the National Autonomous University of Mexico. The compact, rounded wind indicated by data from 1996 transforms - just 18 years later in 2014 - into a "distinctly elongated outflow".
One to watch
The infant star is about 300 times brighter than the Sun and goes by the catchy name of W75N(B)-VLA2.
Being able to observe its dramatic growing pains in real time is unique, according to Prof Huib van Langevelde from Leiden University in the Netherlands, another of the study's authors.
. 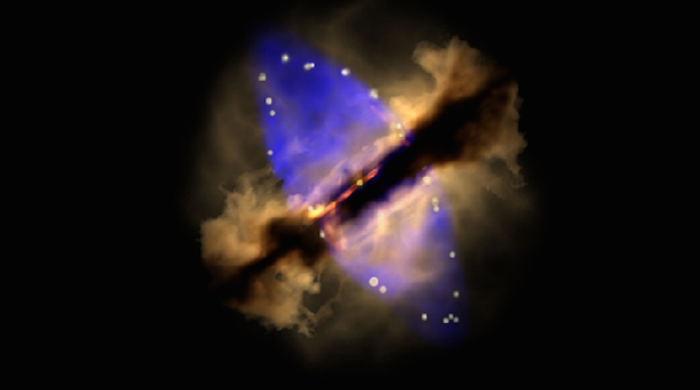 The 2014 data revealed the wind to be much more elongated, emerging from the presumed ring of dust
.
"This object is providing us an exciting opportunity to watch the developments over the next few years, as this very young star develops the characteristic bipolar outflow morphology," said Prof van Langevelde, who also works at the Joint Institute for VLBI in Europe (JIVE).
VLBI - very long baseline interferometry - is the method of comparing signals between widely-spaced antennae, effectively simulating one massive telescope.
One of the major findings that has already emerged from studying W75N(B)-VLA2 relates to earlier work led by JIVE scientists, who in 2009 traced the large-scale magnetic field in that region of space and reported that the field surrounding the young star was neatly aligned with it.
Now, it seems the elongated outflow that has burst forth in just 18 years is also aligned with that magnetic field - suggesting that magnetism is playing a crucial role in the star's formation.
The team hopes to watch and learn more as the "protostar" continues its turbulent development.
"Our understanding of how massive young stars develop is much less complete than our understanding of how Sun-like stars develop," said Dr Gabriele Surcis, another co-author from JIVE.
"It's going to be really great to be able to watch one as it changes."
Quelle: BBC
Astronomie
« Zum vorherigen Eintrag Zum nächsten Eintrag »
2836 Views
Created with page4