IMHOTEP UP – COMETWATCH 20 MARCH
This single frame NAVCAM image was taken on 20 March 2015 at a distance of 81.7 km from the centre of Comet 67P/Churyumov-Gerasimenko. The image scale of the original 1024 x 1024 pixel image is 7 m/pixel and the image measures 7.1 km across; a cropped, processed version is shown below.
. 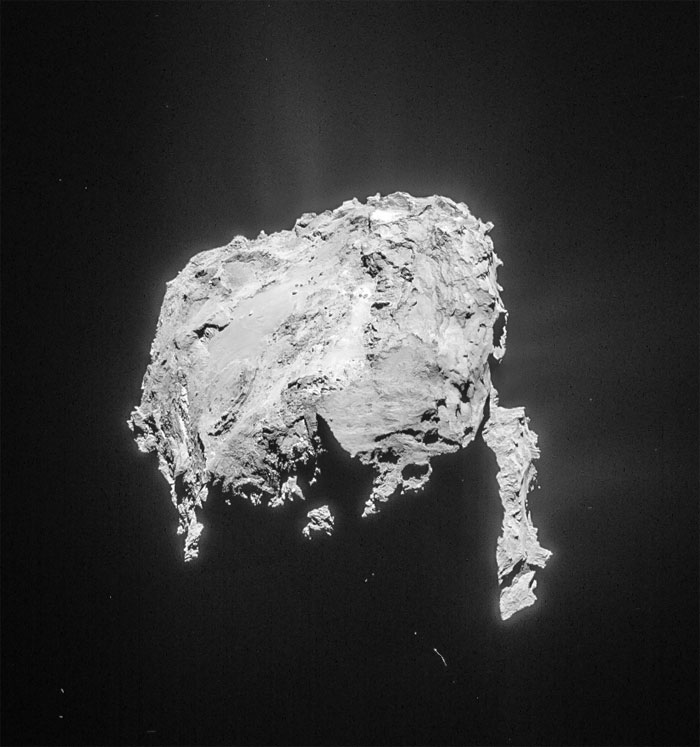 Cropped and processed single frame NAVCAM image of Comet 67P/C-G taken on 20 March 2015 from a distance of 81.7 km to the comet centre. This cropped version measures about 5.8 x 6.1 km. The image is lightly processed to bring out the details of the outflowing material. Credits: ESA/Rosetta/NAVCAM – CC BY-SA IGO 3.0
From this orientation we have a great view across the Imhotep region on the ‘underside’ of the comet’s large lobe, providing additional context for the close flyby images of 14 February. The annotated diagram below points to the approximate regions covered by the NAVCAM and OSIRIS flyby images, including the image featuring Rosetta’s shadow (bottom left image).
. 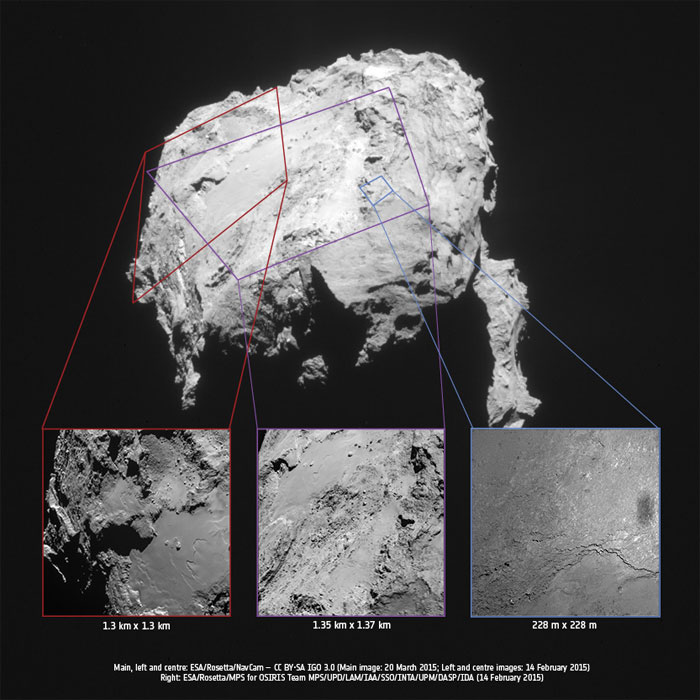 CometWatch 20 March with the 14 February flyby images added as insets. The image outlines vary in shape due to the change in relative position of the comet and spacecraft on the times/dates the images were taken.
. 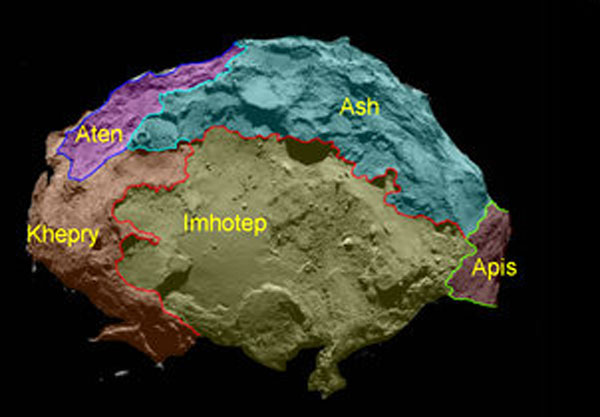 Annotated map of the 'underside' of the comet's large lobe, showing the Imhotep region. Credit: ESA/Rosetta/MPS for OSIRIS Team MPS/UPD/LAM/IAA/SSO/INTA/UPM/DASP/IDA
.
In this orientation, the boundary between Imhotep and Ash can be seen towards the right of the comet’s large lobe. Apis is towards the bottom right, and includes the region with the sharp shadow.
Part of the comet’s small lobe can be seen to the far right of the image, the cliffs of Hathor largely in the shadow cast by the large lobe.
Meanwhile jets of cometary material can be seen rising from the nucleus; in this orientation to the top and right of the image.
The original 1024 x 1024 pixel image for 20 March is provided below:
. 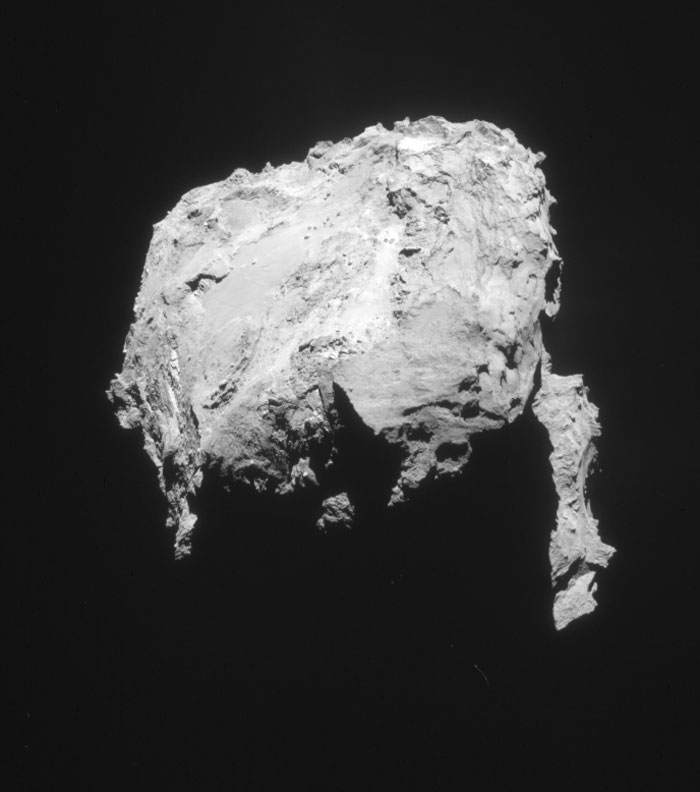 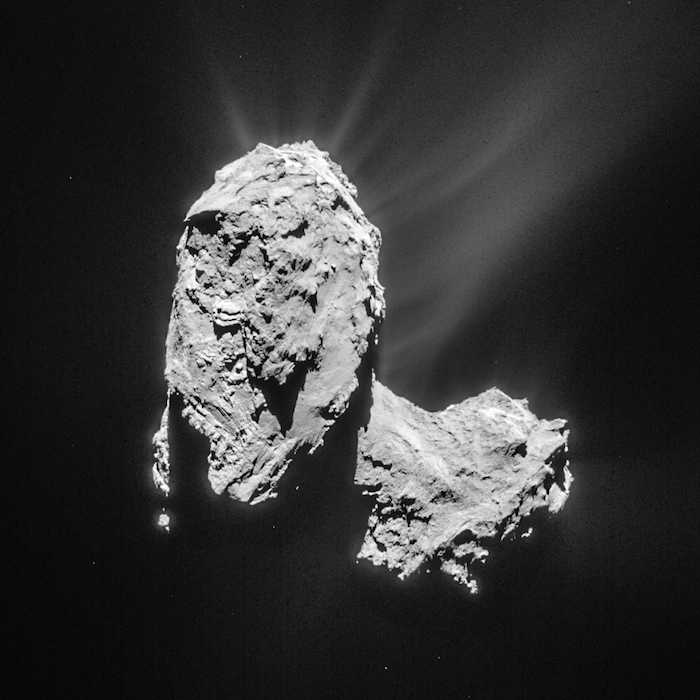 Cropped and processed single frame NAVCAM image of Comet 67P/C-G taken on 21 March 2015 from a distance of 82.6 km to the comet centre. This cropped version measures about 6.2 x 6.2 km. The image is lightly processed to bring out the details of the outflowing material. Credits: ESA/Rosetta/NAVCAM – CC BY-SA IGO 3.0
.
The full-comet image from 21 March (above) has been lightly processed to enhance the details of the outflowing material. It was taken from a distance of 82.6 km, the image scale is 7 m/pixel, and the 1024 x 1024 pixel image measures 7.2 km across.
. 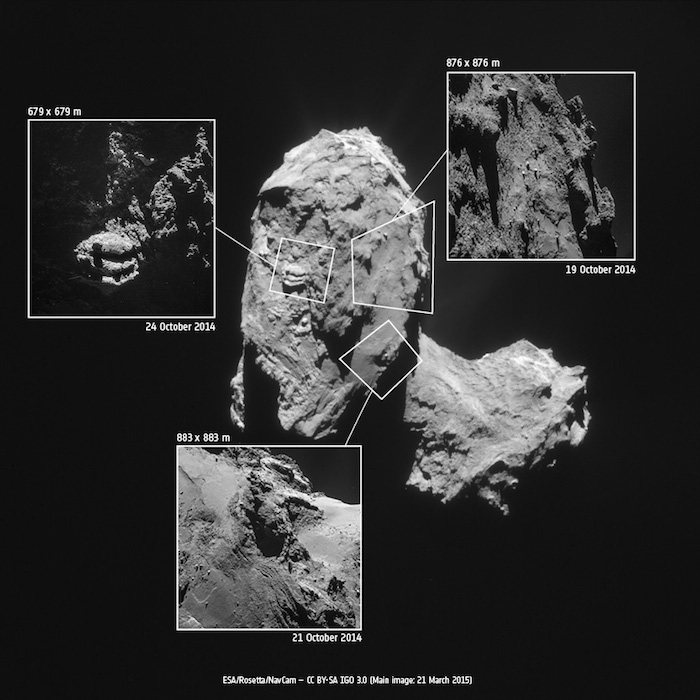 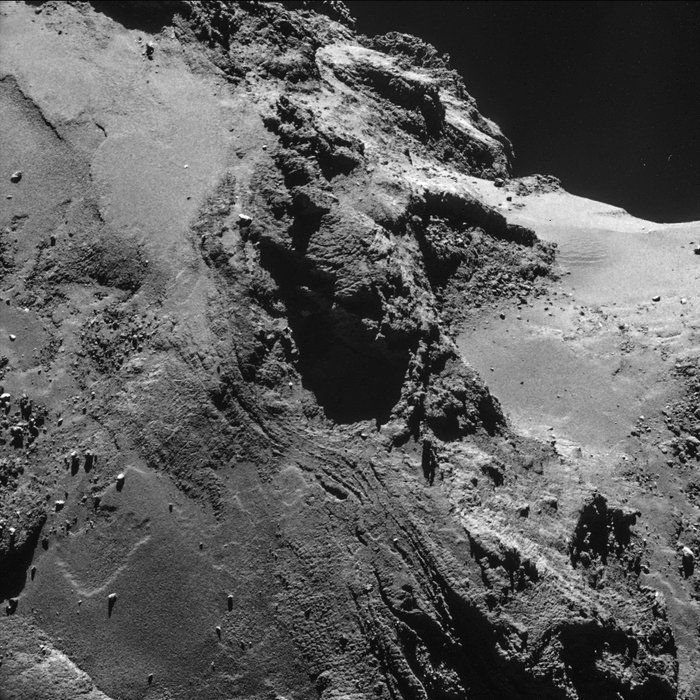 Processed version of the 21 October single frame NAVCAM image. Credits: ESA/Rosetta/NAVCAM – CC BY-SA IGO 3.0
.
The close-ups highlight the range of contrasting surface features seen on the comet, in particular in the Anubis and Atum regions on the comet’s large lobe. The graphic above locates the approximate regions of each inset on the comet – note that due to the change in distance and orientation, the insets are not exactly oriented with how they appear on the main image and the illumination conditions are also different. The close-ups have been processed to bring out the details of the surface and the local nebulosity; the original frames are provided at the end of the post.
The bottom image in the context graphic captures part of the smooth Anubis region on the large lobe (left half of the image), a small portion of the rugged Seth terrain (centre), and the smooth Hapi region that defines the comet neck (right).
Relatively speaking, Anubis and Seth lie in the foreground, while Hapi is in the background: this can be seen clearly in the main image, where parts of the surface clearly visible in the close-up are shadowed by the large lobe.
As described in the recent OSIRIS papers published in Science, the smooth portions of Anubis appear faulted or folded in some places, and scattered boulders may be the products of mass wasting.
. 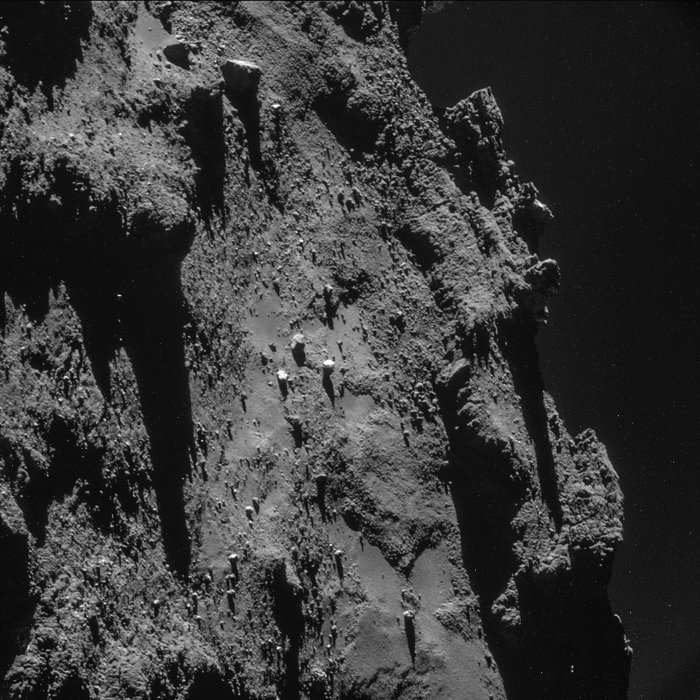 Processed version of the 19 October single frame NAVCAM image. Credits: ESA/Rosetta/NAVCAM – CC BY-SA IGO 3.0
.
The inset at the top right of the context graphic also shows part of Anubis, close to the border of Seth (towards the right in the close-up). Scattered boulders are also visible here, along with more plentiful debris seen typically at the base of cliffs.
This close-up image has been processed to emphasise the faint nebulosity above the horizon on the right, to show the 'peaks' on the horizon silhouetted against this nebulosity, and to see the deeper, darker shadows they're casting onto the nucleus.
. 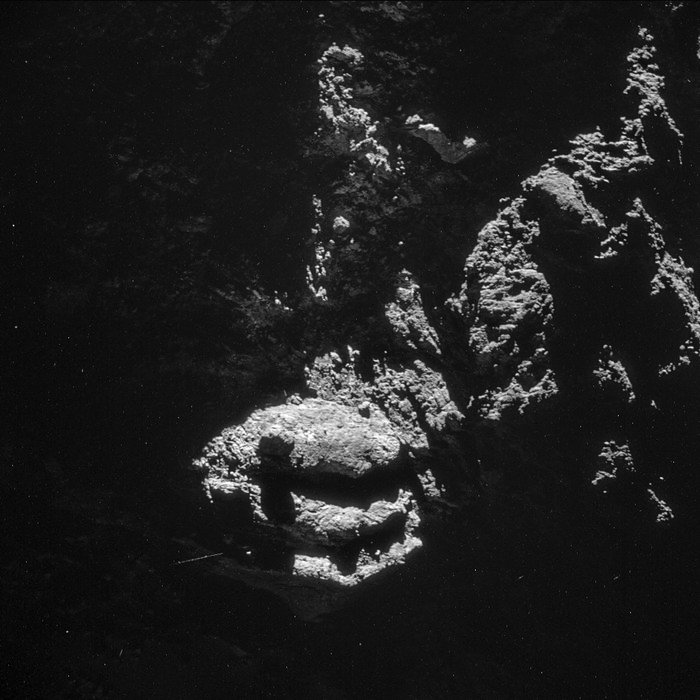 Processed version of the 24 October single frame NAVCAM image. Credits: ESA/Rosetta/NAVCAM – CC BY-SA IGO 3.0
.
Last but certainly not least is the close-up at the left of the context graphic, which highlights part of the highly complex Atum region and its aligned linear features.
This close-up image has been processed to reveal more of the dimly lit portions of the nucleus surrounding the prominent layered structure. A large boulder – approximately 30 m across – appears to be perched at the edge of the curious three-slabbed 'outcrop', casting its shadow onto the layer below.
Quelle: ESA
-
Update: 30.03.2015
.
COMETWATCH 22 MARCH
This single frame Rosetta Navigation Camera image was taken on 22 March 2015 at a distance of 77.8 km from the centre of Comet 67P/C-G. The image scale is 6.6 m/pixel and the 1024 x 1024 pixel image measures 6.8 km across.
. 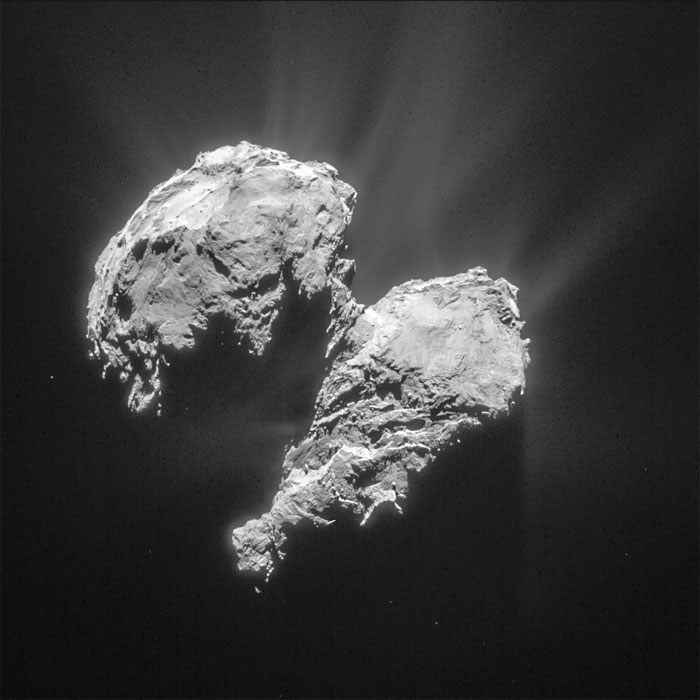 Cropped and processed single frame NAVCAM image of Comet 67P/C-G taken on 22 March 2015 from a distance of 77.8 km to the comet centre. The processed image is cropped and measures 6 x 6 km. Credits: ESA/Rosetta/NAVCAM – CC BY-SA IGO 3.0
.
The image above has been processed to bring out the details of the comet’s activity, while also emphasising details on the nucleus.
The image presents another interesting view of regions previously cast in shadow, particularly on the small lobe around Hatmehit, and of the topography on the large lobe close to Aker and Khepry. (The 9 March image also offered a new view of these regions, from a slightly different angle).
At the bottom right, the large lobe is casting a shadow over the broader ‘atmosphere’ around the comet.
The original 1024 x 1024 image is provided below.
.

Quelle: ESA
.
Update: 1.04.2015
.
IMAGE BROWSER UPDATE: APPROACH TO COMET, PLUS CRUISE PHASE IMAGES!
The Rosetta downlink and archive teams at ESAC are pleased to announce that the next set of NAVCAM image data are now available in ESA’s Planetary Science Archive (PSA) and via the new NAVCAM Image Browser tool.
.

This sequence of 76 images was prepared using images acquired on 30 July and 1 August. The apparent darkening of the nucleus during the
sequence is caused by the dependence of the reflectance factor on phase angle, which evolves from 3.4 to 8.5 degrees, when the distance from Rosetta to the comet reduced from 1332 km to 853 km.
Credits: ESA/Rosetta/NAVCAM – CC BY-SA IGO 3.0
.
The Image Browser was launched earlier this month with NAVCAM image data from the first half of 2014. The latest set of 214 images, taken between 2 July and 1 August, cover the period when Rosetta moved from 42 980 km to 848 km from the comet, and the shape of 67P/C-G was finally revealed. During this phase, 4-5 images were taken per day for navigation, with one image taken every 30 minutes from 30 July to 1 August.
As an added bonus, the Image Browser has now also been updated with images from the cruise phase of the mission (the underpinning data was already accessible via the PSA). That is, the NAVCAM images taken during the swing-bys of Earth and Mars, and asteroids Steins and Lutetia are now also available via the Image Browser (although note that the cruise phase datasets for Steins and Lutetia only contain navigation images from a far distance, so the asteroids are not resolved).
The next NAVCAM data release is expected on 30 April.
.
Rosetta MARS-SWING-BY: