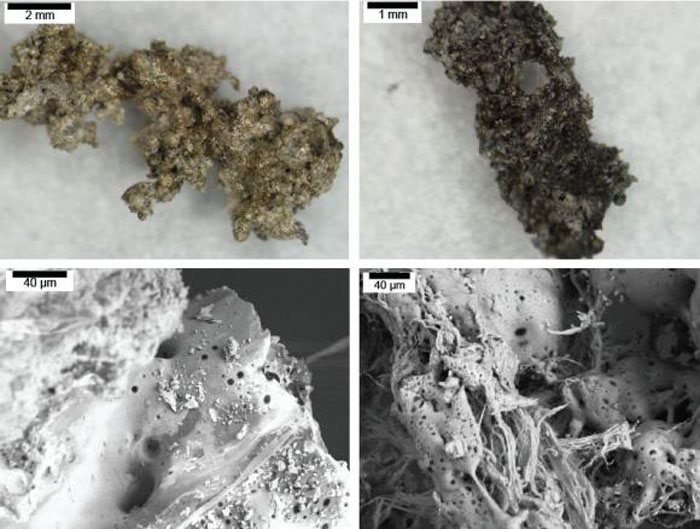 When heavenly bodies collide
Impact material generated without the presence of carbon from complex organics, top left, is lighter than material generated with carbon, top right. Scanning electron microscope images, bottom row, show finer-scale structure and texture variations.
Images: NASA/Ames
.
Scientists have long puzzled over the planet Mercury’s excessively dark surface. New research suggests that carbon from passing comets could be the planet’s mystery darkening agent.
PROVIDENCE, R.I. [Brown University] — A team of scientists has a new explanation for the planet Mercury’s dark, barely reflective surface. In a paper published in Nature Geoscience, the researchers suggest that a steady dusting of carbon from passing comets has slowly painted Mercury black over billions of years.
Mercury’s dark surface has long been a mystery to scientists. On average, Mercury is much darker than its closest airless neighbor, our Moon. Airless bodies are known to be darkened by micrometeorite impacts and bombardment of solar wind, processes that create a thin coating of dark iron nanoparticles on the surface. But spectral data from Mercury suggests its surface contains very little nanophase iron, certainly not enough to account for its dim appearance.
“It’s long been hypothesized that there’s a mystery darkening agent that’s contributing to Mercury’s low reflectance,” said Megan Bruck Syal, a postdoctoral researcher at Lawrence Livermore National Laboratory who performed this research while a graduate student at Brown University. “One thing that hadn’t been considered was that Mercury gets dumped on by a lot of material derived from comets.”
As comets approach Mercury’s neighborhood near the sun, they often start to break apart. Cometary dust is composed of as much as 25 percent carbon by weight, so Mercury would be exposed to a steady bombardment of carbon from these crumbling comets. Using a model of impact delivery and a known estimate of micrometeorite flux at Mercury, Bruck Syal was able to estimate how often cometary material would impact Mercury, how much carbon would stick to Mercury’s surface, and how much would be thrown back into space. Her calculations suggest that after billions of years of bombardment, Mercury’s surface should be anywhere from 3 to 6 percent carbon.
The next part of the work was to find out how much darkening could be expected from all that impacting carbon. For that, the researchers turned to the NASA Ames Vertical Gun Range. The 14-foot canon simulates celestial impacts by firing projectiles at up to 16,000 miles per hour.
For this study, the team launched projectiles in the presence of sugar, a complex organic compound that mimics the organics in comet material. The heat of an impact burns the sugar up, releasing carbon. Projectiles were fired into a material that mimics lunar basalt, the rock that makes up the dark patches on the nearside of the Moon. “We used the lunar basalt model because we wanted to start with something dark already and see if we could darken it further,” said Peter Schultz, professor emeritus of geological sciences at Brown and a co-author of the new research.
The experiments showed that tiny carbon particles become deeply embedded in the impact melted material. The process reduced the amount of light reflected by the target material to less than 5 percent — about the same as the darkest parts of Mercury.
Importantly, spectroscopic analysis of the impact samples revealed no distinctive spectral fingerprints, again similar to flat spectral signatures from Mercury. “We show that carbon acts like a stealth darkening agent,” Schultz said. “From the standpoint of spectral analysis, it’s like an invisible paint.”
And that paint has been building up on Mercury’s surface for billions of years.
“We think this is a scenario that needs to be considered,” Schultz said. “It appears that Mercury may well be a painted planet.”
The research was supported by NASA’s Planetary Geology and Geophysics program (NNX13AB75G) and the NASA Earth and Space Science Fellowship program (NNXC12AL79H). Miriam Riner from the Planetary Sciences Institute was a co-author on the paper.
Quelle: Brown University
Astronomie
« Zum vorherigen Eintrag Zum nächsten Eintrag »
2801 Views
Created with page4