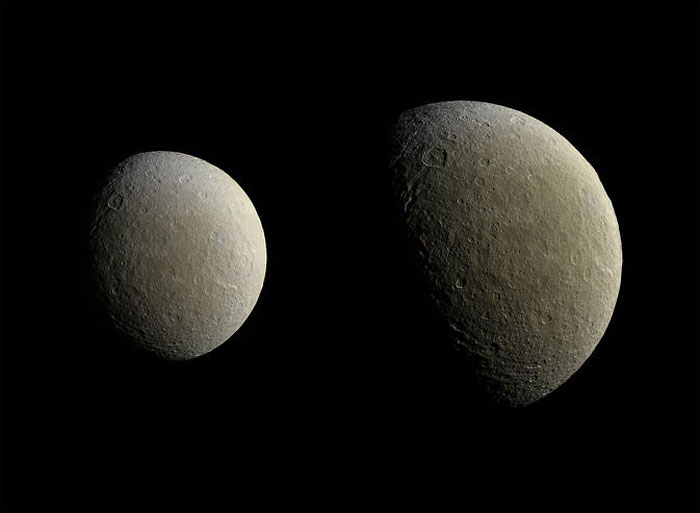 Cassini captured these views of Saturn's icy moon Rhea on Feb. 9. The spacecraft returned to equatorial orbits around Saturn in March after nearly two years, allowing the mission to once again have close encounters with moons other than Titan.
Image Credit: NASA/JPL-Caltech/Space Science Institute
.
A dual view of Saturn's icy moon Rhea marks the return of NASA's Cassini spacecraft to the realm of the planet's icy satellites. This follows nearly two years during which the spacecraft's orbits carried it high above the planet's poles. Those paths limited the mission's ability to encounter the moons, apart from regular flybys of Titan.
Cassini's orbit will remain nearly equatorial for the remainder of 2015, during which the spacecraft will have four close encounters with Titan, two with Dione and three with the geyser-moon, Enceladus.
The two views of Rhea were taken about an hour-and-a-half apart on Feb. 9, 2015, when Cassini was about 30,000 to 50,000 miles (50,000 to 80,000 kilometers) away from the moon. Cassini officially began its new set of equatorial orbits on March 16.
The views show an expanded range of colors from those visible to human eyes in order to highlight subtle color variations across Rhea's surface. In natural color, the moon's surface is fairly uniform. The image at right represents the highest-resolution color view of Rhea released to date.
The Cassini-Huygens mission is a cooperative project of NASA, ESA (European Space Agency) and the Italian Space Agency. NASA's Jet Propulsion Laboratory in Pasadena, California, manages the mission for the agency's Science Mission Directorate in Washington. JPL is a division of the California Institute of Technology in Pasadena. The Cassini imaging operations center is based at the Space Science Institute in Boulder, Colorado.
Quelle: NASA
Raumfahrt
« Zum vorherigen Eintrag Zum nächsten Eintrag »
2906 Views
Created with page4