SpaceX test-fires Falcon engines before Sunday launch
Space continues to target a 10:49 p.m. Sunday launch of two commercial satellites from Cape Canaveral Air Force Station after test-firing a Falcon 9 rocket's main engines today.
The brief firing of nine first-stage Merlin engines at the conclusion of a countdown rehearsal, with the rocket bolted to its Launch Complex 40 pad, completed the company's last major pre-launch milestone.
The Falcon 9 will attempt to launch a pair of commercial communications satellites for Eutelsat and Asia Broadcast Satellite to an orbit more than 22,000 miles above the equator.
Sunday's launch window extends 45 minutes.
Because all the rocket's fuel is needed to get the payloads' to their high orbit, SpaceX will not attempt to land and recover the Falcon 9 booster as it has after recent launches.
Quelle: Florida Today
- 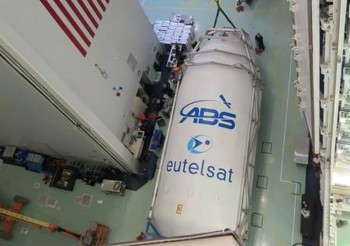 Legless Falcon 9 conducts Static Fire test ahead of Sunday launch
SpaceX’s Falcon 9 v1.1 has conducted a Static Fire – or Hot Fire – test at Cape Canaveral’s SLC-40 ahead of Sunday’s mission to loft the ABS-3A and Eutelsat 115 West B satellites into orbit. This mission won’t involve a propulsive landing on the company’s ASDS, although it will still provide another milestone for SpaceX – via the first dual passenger launch for the Falcon 9.
Static Fire Test:
Preparations for this pad flow began almost immediately after SpaceX’s previous launch from Space Launch Complex -40 (SLC-40) at the Cape.
That previous mission was successfully conducted just a matter of weeks ago, as the Falcon 9 v1.1 lofted the US National Oceanic and Atmospheric Administration’s Deep Space Climate Observatory (DSCOVR) spacecraft uphill.
This was the first time SpaceX had conducted this type of deep space mission.
DSCOVR is currently in good health as it heads out to the Lagrangian point L1 – located between the Sun and the Earth, about 1.5 million kilometres (930,000 miles) from Earth – which will provide the satellite with an uninterrupted view of the Sun and the Sun-facing disc of the Earth.
The spacecraft is currently at the half way point towards its destination.
SpaceX’s packed manifest requires SLC-40 to be turned around an increased pace, naturally achieved as the successes rack up and experience is built within what is still a relatively young space industry player.
The company has a launch site on the West Coast – at Vandenberg Air Force Base – and plans to activate another site in Texas. SpaceX is also continuing work to convert the famous Pad 39A from its Shuttle era, opening with the debut flight of its Falcon Heavy launch vehicle.
An original target – or NET (No Earlier Than) – of February 27 was set for the latest mission. The current NET is March 1, showing only a few days of movement in the processing flow towards launch.
The Flight Readiness Review (FRR) was conducted on Monday, ahead of the Static Fire test on Wednesday.
This test a key processing milestone, a requirement that is used to ensure the pad’s fueling systems – and the rocket – function properly in a fully operational environment.
Numerous requirements have to be successfully proven via such a test, such as the engine ignition and shut down commands, which have to operate as designed, and that the Merlin 1D engines perform properly during start-up.
The vehicle was rolled out of her hanger and erected at 10:30am Eastern on Wednesday, ahead of fueling and the Static Fire – which was conducted at around 2:10pm Eastern.
The data from the test will be fed into the Launch Readiness Review (LRR), which will ultimately confirm the launch date and the window – which is currently understood to be 22:49 through to 23:34 Eastern. The Eastern Range also has to approve the launch date and window – which will be fully confirmed ahead of the LRR.
The Falcon 9 v1.1 has two passengers to loft into space, with the Boeing built Eutelsat 115 West B set to become part of a family of four GEO commercial satellites for the operator.
Based on the BSS-702SP platform, the spacecraft has a launch mass of 4,861 lbs.
The satellite will use its electrical propulsion system to transit from its deployment in the transfer orbit towards its eventual Geostationary Orbit destination.
The other passenger is another communications satellite built by Boeing Satellite Systems and also based on the 702SP platform.
ABS 3A, operated by Asia Broadcasting Satellite (ABS), is destined to replace the ABS 3 satellite launched in 1997. It has a mass of 4,307 lbs.
During this unique mission for SpaceX, the Falcon 9 Second Stage will take over the mission three minutes after launch, via staging with the core stage.
The first firing of the MVac engine (SES-1) will take place 186 seconds into the mission. Shutdown (SECO-1) will take place 530 seconds into flight, ahead of a coast phase.
A second firing of the MVac (SES-2) will take place 1,541 seconds into the mission, cutting off 20 seconds later (SECO-2).
ABS 3A will be the first satellite to bid farewell to the second stage, with separation expected at 1,807 seconds into flight. Eutelsat 115 West B will then wait until its time to set sail, which is expected to be at around the 2,107 second mark into the mission.
Due to the demands of getting these two birds into space, there won’t be enough spare propellant on board the Falcon 9 core stage to attempt to land on the specially modified “barge”, known as the Autonomous Spaceport Drone Ship (ASDS).
As such, this Falcon 9 v1.1 is without her landing legs that will one day touch down on the ASDS, allowing for a return back to port – part of SpaceX’s reusability aspirations for its rockets.
The next attempt to land a Falcon 9 v1.1 core stage on the ASDS will come during April’s CRS-6 mission, in-between the primary events of successfully lofting the next Dragon en route to the International Space Station (ISS).
Quelle: NS
.
Update: 28.02.2015
. 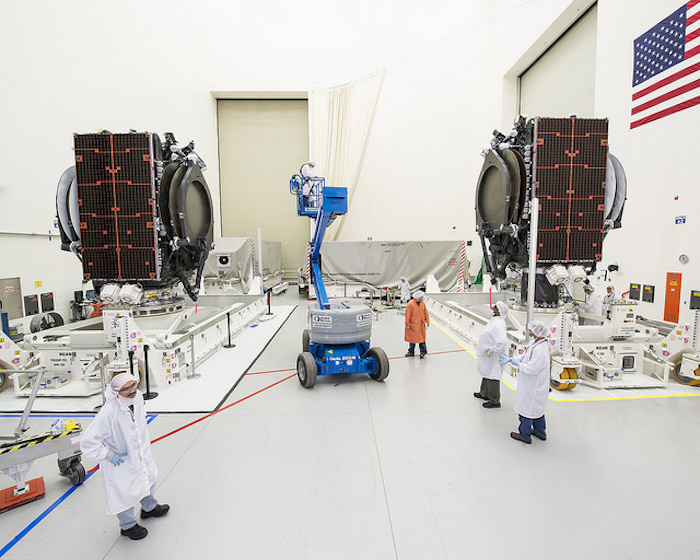 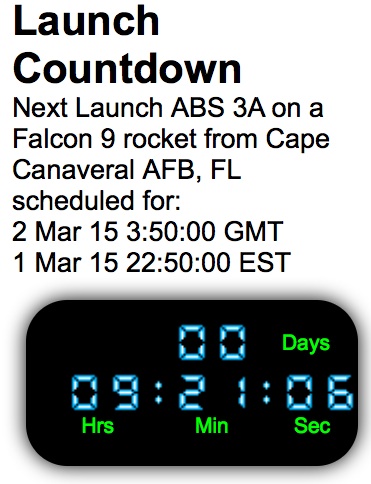 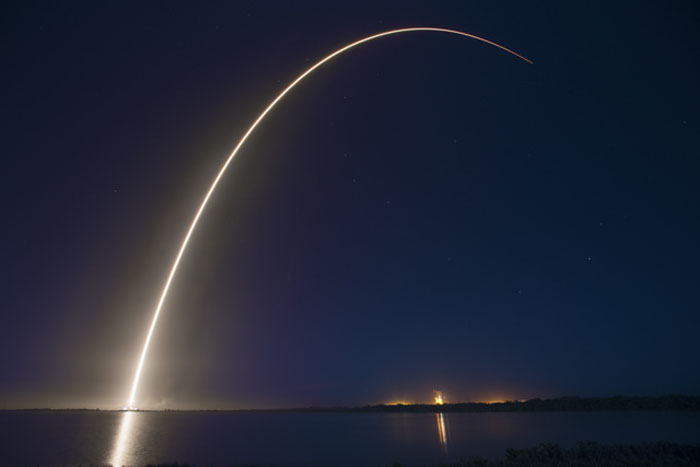 SpaceX has triumphantly accomplished “Three for Three”, delivering a third mission to space in as many months, as the Hawthorne, Calif.-based launch operator successfully boosted the Eutelsat 115 West B and Asia Broadcasting Satellite (ABS)-3A communications satellites to Geostationary Transfer Orbit (GTO). Liftoff took place on time at 10:50 p.m. EST on Sunday, 1 March. Thus continues a spectacular 2015 for SpaceX, which has already despatched the latest Commercial Resupply Services (CRS) Dragon cargo ship into low-Earth orbit, bound for the International Space Station (ISS) and the Deep Space Climate Observatory (DSCOVR) on a journey to the L1 Lagrange Point, more than 930,000 miles (1.5 million km) beyond Earth. Although the company has delivered three missions within three months previously—launching the AsiaSat-8, CRS-4 Dragon and AsiaSat-6 payloads in a seven-week period, last summer—this is the first time that it has boosted three back-to-back payloads into quite different orbits and onto quite different trajectories. It also marks SpaceX’s third launch in just 50 days.
Quelle: SpaceX
Raumfahrt
« Zum vorherigen Eintrag Zum nächsten Eintrag »
3024 Views
Created with page4