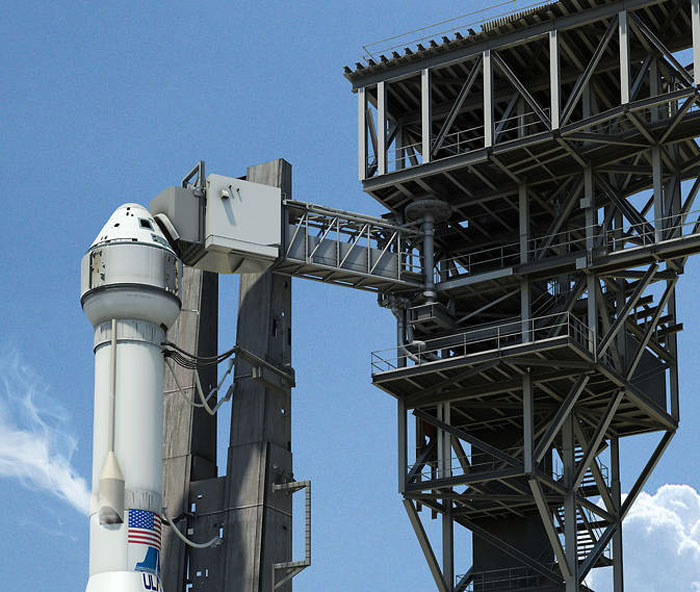 Boeing and United Launch Alliance teams held a ceremonial groundbreaking Feb. 20 to begin construction on the first new crew access structure at Cape Canaveral Air Force Station in decades. The preparations will enable Space Launch Complex 41 to host astronauts and their support personnel for flight tests and missions to the International Space Station.
The tower will be used for launches of Boeing's CST-100 spacecraft atop an Atlas V rocket. Boeing was selected to finalize the design of its integrated crew transportation system and work with NASA’s Commercial Crew Program to certify it for crew launches to the station by 2017.
"Fifty-three years ago today, John Glenn became the first American to orbit the Earth, launching on an Atlas just a few miles from here,” said Jim Sponnick, vice president of ULA’s Atlas and Delta programs. “The ULA team is very proud to be collaborating with Boeing and NASA on the Commercial Crew Program to continue that legacy and to return America to launching astronauts to the station.”
Boeing and ULA finished the design for the 200-foot-tall, metal latticework crew access structure in the summer of 2013. The design was made modular so crews could build large sections of the structure away from the pad then truck them in and stack them up to complete the work in between Atlas V launches. It will take about 18 months to build the tower.
“This is truly an integrated effort by a lot of partners and that’s really represented here today by the guests celebrating this groundbreaking with us,” said John Mulholland, Boeing Vice President of Commercial Programs. “This is the first construction of its type on the Cape since the 1960s, so building this crew tower, returning of the human launch capability to the United States, is very significant.”
Construction crews will face all the usual challenges of building a 20-story-high tower beside the ocean, plus the fact that one of the busiest launchers in the American catalog is not going to take time off during the construction phase.
The crew access structure will visually stand out at SLC-41, largely because the launch complex is a "clean pad" design with only the reinforced concrete hard stand and four lightning towers in place. About 1,800 feet to the south is a building called the Vertical Integration Facility, which houses the cranes and work platforms to assemble an Atlas V.
"Besides the VIF and the lightning towers, the crew access tower will be the tallest structure at the launch site," said Howard Biegler, Launch Operations lead of Human Launch Services for ULA.
The Atlas V launch pad has been used only for non-crewed spacecraft to this point, hosting Titan rockets beginning in 1965 and then the Atlas V since 2002. NASA missions launched from SLC-41 include the Viking robots that landed on Mars, the Voyager spacecraft that toured the outer planets, the New Horizons probe now headed to Pluto, and the Curiosity rover currently traversing Mars.
Although the pad has proved adept at servicing those extremely complex spacecraft and probes, the demands for handling a capsule that will carry humans are far greater. For instance, the rocket cannot be rolled to the pad and fueled while astronauts are aboard. Safety considerations also require a way to get away from the rocket quickly in case of an emergency before the rocket lifts off.
"I can’t wait to see this tower erected and an Atlas V up there with a CST-100 headed off to the International Space Station," said Bob Cabana, director of NASA’s Kennedy Space Center. "This historic pad has launched a number of NASA scientific missions and will now launch an even more valuable, precious piece of cargo, and that’s NASA astronauts to the station."
Missions flown on commercial crew spacecraft are vital to the national goal of restoring to America the ability to launch astronauts to the station so the unique orbiting laboratory can continue to fulfill its promise of achieving cutting-edge research for the benefit of all on Earth. With the new spacecraft, the station's crew can expand by one, which will enable research time on the station to double from its current 40 hours a week to 80 hours a week.
“This is a shining example of the progress we’ll see along the Space Coast as industry works toward safely flying our astronauts to and from the station,” said Kathy Lueders, manager of NASA’s Commercial Crew Program. “Once this crew access tower is complete, this historical launch complex will be an integral part of a new era in human spaceflight.”
. 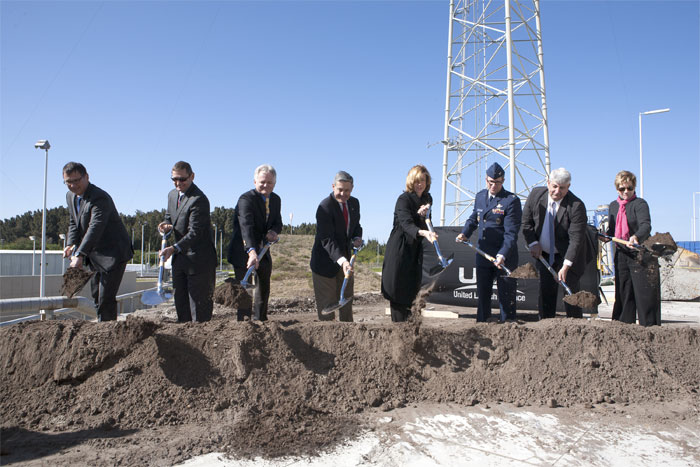 Officials take part in the formal groundbreaking at Space Launch Complex 41 where the Commercial Crew Access Tower will be built. The 200-foot-tall structure is designed to provide safe access for flight and ground crews to the Boeing CST-100 spacecraft at the pad.
Quelle: NASA
Raumfahrt
2511 Views
Created with page4