The Progress resupply vehicle is an automated, unpiloted version of the Soyuz spacecraft that is used to bring supplies and fuel to the International Space Station. The Progress also has the ability to raise the Station's altitude and control the orientation of the Station using the vehicle's thrusters.
Both the Progress M and M1 versions have a pressurized Cargo Module to carry supplies, a Refueling Module that holds fuel tanks containing propellant and pressurized gases, and an Instrumentation/Propulsion Module where the Progress systems equipment and thrusters are located.
The Progress spacecraft is launched to the Space Station from the Baikonur Cosmodrome in Kazakhstan aboard a Soyuz rocket. It normally docks to the end of the Station's Zvezda Service Module, but it can also dock to the bottom of the Pirs Docking Compartment.
Cargo Module
The Progress Cargo Module -- which is similar in construction to the Soyuz Orbital Module -- can carry up to 1,700 kilograms (3,748 pounds) of supplies to the Space Station in a pressurized volume of about 6 cubic meters (212 cubic feet). Once the Progress docks with the Space Station, the crew enters the Cargo Module through the docking hatch.
After the cargo is removed and before the Progress undocks, the crew refills it with trash, unneeded equipment and wastewater, which will burn up with the spacecraft when it re-enters the Earth's atmosphere. The Cargo Module can hold 1,000 to 1,700 kilograms (2,205 to 3,748 pounds) of trash.
Refueling Module
In place of the Soyuz Descent Module, the Progress has a Refueling Module. The Progress M1 Refueling Module has eight propellant tanks that can hold up to 1,740 kilograms (3,836 pounds) of fuel, depending on how much weight is carried in the Cargo Module. Four of the tanks contain fuel, while the other four contain the fuel's oxidizer. The Progress M has four tanks -- two for fuel and two for oxidizer -- and two water tanks. The M1 has no water tanks.
The contents of the fuel and oxidizer tanks can be transferred to the Space Station's own propulsion system through fluid connectors in the docking ring. This propellant can also be used by the Progress' thrusters to boost the Station altitude or to change its orientation, or attitude, in space.
Instrumentation/Propulsion Module
This module contains the electronic equipment, or avionics, for the Progress' systems and sensors. It is similar in design to the Soyuz Instrumentation/Propulsion Module. Any fuel in this module that is not used to get the Progress to the Station or for undocking and deorbit can be used to boost the altitude of the Space Station. Surplus fuel amounts can vary from 185 to 250 kilograms (408 to 551 pounds).
Rendezvous, Docking and Undocking
The Progress normally takes two days to reach the Space Station. The rendezvous and docking are both automated, although once the spacecraft is within 150 meters (492 feet) of the Station, the Russian Mission Control Center just outside Moscow and the Station crew monitor the approach and docking.
The Progress uses an automated, radar-based system called Kurs to dock to the Station. The active portion of the Kurs is on the Progress and the passive equipment is on the Station. The Station crew can also dock the Progress using the TORU system, a backup remote control docking system in the Station's Zvezda Service Module.
Once the Progress is filled with trash, usually a day before the launch of the next Progress vehicle, the Station crew closes the hatches and initiates the undocking process. Once the Progress has undocked, the vehicle's thrusters are fired to maneuver it into an orbit that will send it into the Earth's atmosphere, where it will burn up on re-entry over the Pacific Ocean.
- 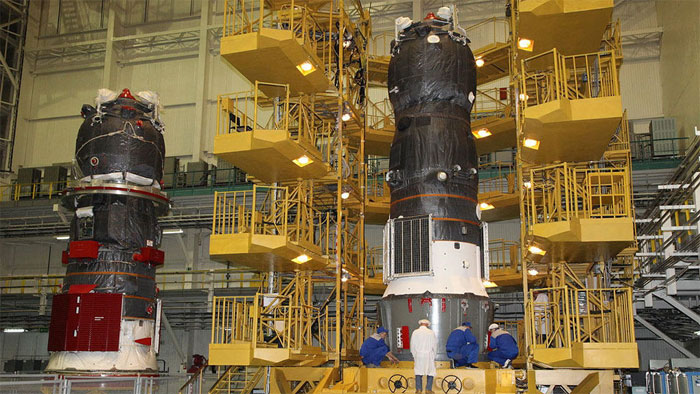 Black caviar, favorite of Russian czars, will be among more than two tons of supplies scheduled for delivery to the International Space Station (ISS) on Tuesday, Feb. 17, 2015. The launch of the Progress M-26M cargo ship is scheduled for 14:00:17 Moscow Time (11:00 UTC, 6 a.m. EST) from Baikonur Cosmodrome in Kazakhstan. The first Russian re-supply mission of the year will deliver propellant, food, water and other essentials for two women and four men from three countries comprising the 41st long-duration expedition onboard the outpost. As usual, the pressurized cargo section of the seven-ton space freighter includes food and other items requested by individual crew-members, including fresh fruits, vegetables, and, this time, a traditional Russian delicatessen—the sturgeon caviar. The ship also reportedly carries presents for female members of the crew to mark the International Women's Day on Mar. 8. On the business side of the mission, the freighter will deliver a 120-kilogram electronics box to replace a similar failed gear, the part of the Kurs (Course) rendezvous system on the station. Following the 10-minute ride into an initial parking orbit aboard a three-stage Soyuz-U rocket, Progress M-26M is scheduled to conduct four orbit-correction maneuvers in order to reach its destination around six hours later. If everything goes as planned, the spacecraft will berth at the ISS at 19:58 Moscow Time (16:58 UTC, 11:58 a.m. EST). In a busy comings and goings 400 kilometers above the Earth surface, the European Space Agency's ATV-5 cargo ship had to be undocked from the aft port of the Zvezda service module (a part of the Russian segment) on Saturday to make room for the new arrival. The need to send off the European vessel as scheduled, combined with a failure of one of four power supply lines onboard ATV-5, prompted European officials to cancel a highly anticipated fiery reentry of the 19-ton behemoth along the so-called "shallow dive," which would be possible on February 27. The experiment aimed to provide NASA and ESA with a rare opportunity to study the reentry process. Despite the fact that just two power-supply lines would be enough to guide the ship onto its reentry trajectory, the officials would not risk a slightest possibility for a stranded ship in the Earth orbit. Due to its massive size, burning fragments of the spacecraft were practically guaranteed to reach the Earth's surface and, in case of the uncontrolled reentry, they could crash anywhere on our planet from 51.6° North to 51.6° South latitude. As a result, the ATV-5 was quickly directed into the Earth's atmosphere on Sunday, Feb. 15, 2015, some 30 hours after undocking and, by all accounts, was safely disposed off. Sensors inside the spacecraft were still expected to transmit valuable information to engineers.
Quelle: SEN
. 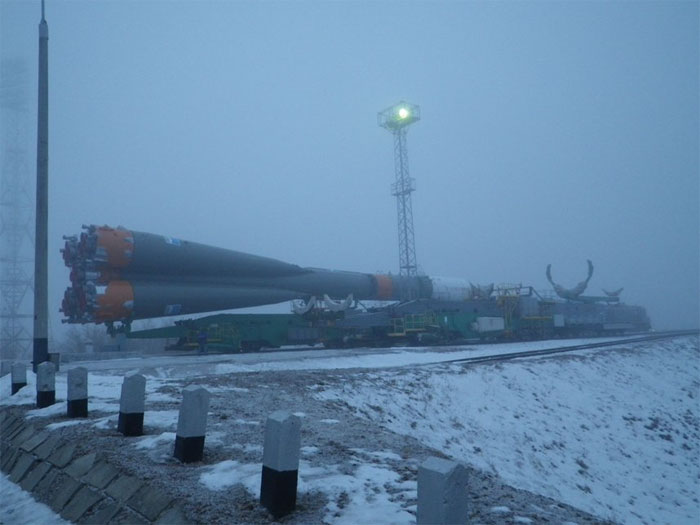 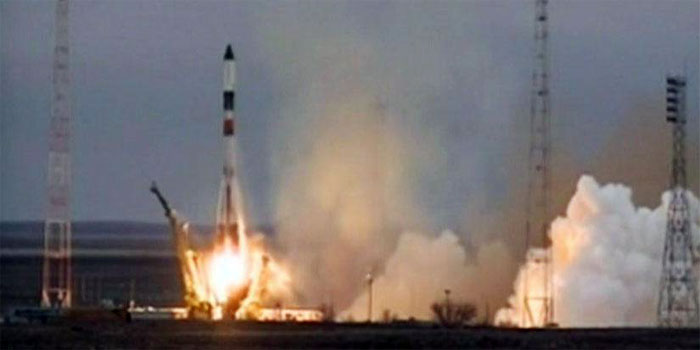 Progress M-26M, atop its Soyuz-U booster, roars into the cold gloom of a midwinter Baikonur sky at 5:00:17 p.m. local time (6:00:17 a.m. EST) Tuesday, 17 February. Photo Credit: NASA TV
Russia has successfully delivered its first mission of 2015 towards the International Space Station (ISS), with the successful liftoff of Progress M-26M—also designated “Progress 58P” in ISS Program nomenclature—from Site 1/5 at the Baikonur Cosmodrome in Kazakhstan. The three-stage Soyuz-U booster roared away from Earth precisely on time at 5:00:17 p.m. local time (6:00:17 a.m. EST) Tuesday, 17 February, bound for a six-hour, four-orbit “fast rendezvous” to reach the space station and resupply the incumbent Expedition 42 crew. Laden with 5,225 pounds (2,370 kg) of equipment, experiments, spare parts, clothes, food, water and fuel, this was the 60th ISS-bound Progress to be launched since Progress M1-3, way back in August 2000, and the 149th in the program’s 37-year history.
Quelle: AS
. 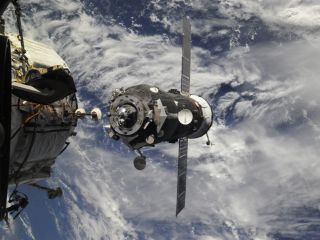 Traveling about 257 miles above the Atlantic Ocean northeast of Puerto Rico, the unpiloted Progress 58 Russian cargo ship docked at 11:57 a.m. EST to the rear port of the Zvezda service module of the International Space Station. The craft is delivering three tons of food, fuel, supplies and experiment hardware to the six crew members aboard the orbital laboratory. Progress 58 is scheduled to remain docked to the space station until August.
Meanwhile, astronauts in the U.S. segment of the station are reviewing procedures for a trio of spacewalks. The first is set to begin Friday at 7:10 a.m. Spacewalkers Barry Wilmore and Terry Virts will exit the orbital lab to set the stage for a pair of new commercial crew vehicle docking ports to be installed later this year.
Outside the station on Sunday, robotics controllers on the ground maneuvered the Canadarm2 with the Dextre attached to remove and replace a faulty Remote Power Controller Module (RPCM). The RPCM provides backup commanding capability to the port Thermal Radiator Rotating Joint.
. 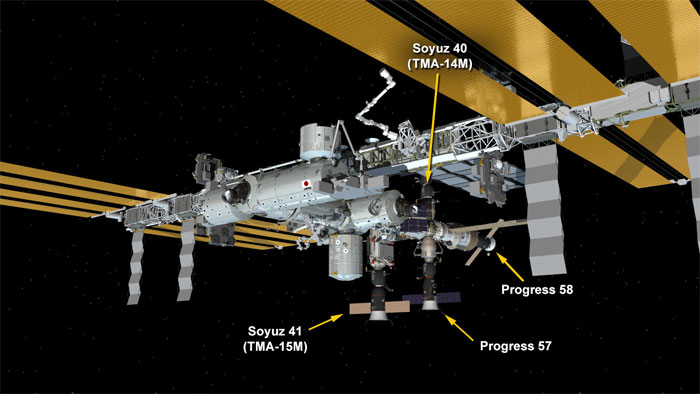