Plumes seen reaching high above the surface of Mars are causing a stir among scientists studying the atmosphere on the Red Planet.
On two separate occasions in March and April 2012, amateur astronomers reported definite plume-like features developing on the planet.
The plumes were seen rising to altitudes of over 250 km above the same region of Mars on both occasions. By comparison, similar features seen in the past have not exceeded 100 km.
“At about 250 km, the division between the atmosphere and outer space is very thin, so the reported plumes are extremely unexpected,” says Agustin Sanchez-Lavega of the Universidad del País Vasco in Spain, lead author of the paper reporting the results in the journal Nature.
. 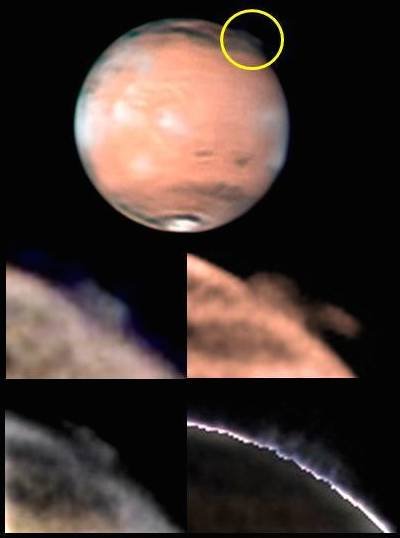 The top image shows the location of the mysterious plume on Mars, identified within the yellow circle (top image, south is up), along with different views of the changing plume morphology taken by W. Jaeschke and D. Parker on 21 March 21 2012.
.
The features developed in less than 10 hours, covering an area of up to 1000 x 500 km, and remained visible for around 10 days, changing their structure from day to day.
None of the spacecraft orbiting Mars saw the features because of their viewing geometries and illumination conditions at the time.
However, checking archived Hubble Space Telescope images taken between 1995 and 1999 and of databases of amateur images spanning 2001 to 2014 revealed occasional clouds at the limb of Mars, albeit usually only up to 100 km in altitude.
But one set of Hubble images from 17 May 1997 revealed an abnormally high plume, similar to that spotted by the amateur astronomers in 2012.
Scientists are now working on determining the nature and cause of the plumes by using the Hubble data in combination with the images taken by amateurs.
. 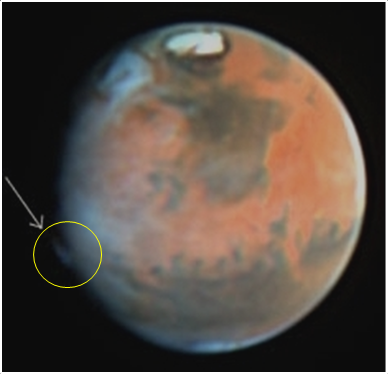 A curious plume-like feature was observed on Mars on 17 May 1997 by the Hubble Space Telescope. It is similar to the features detected by amateur astronomers in 2012, although appeared in a different location.
.
“One idea we’ve discussed is that the features are caused by a reflective cloud of water-ice, carbon dioxide-ice or dust particles, but this would require exceptional deviations from standard atmospheric circulation models to explain cloud formations at such high altitudes,” says Agustin.
“Another idea is that they are related to an auroral emission, and indeed auroras have been previously observed at these locations, linked to a known region on the surface where there is a large anomaly in the crustal magnetic field,” adds Antonio Garcia Munoz, a research fellow at ESA’s ESTEC and co-author of the study.
The jury is still out on the nature and genesis of these curious high-altitude martian plumes. Further insights should be possible following the arrival of ESA’s ExoMars Trace Gas Orbiter at the Red Planet, scheduled for launch in 2016.
Quelle: ESA
Mars-Chroniken
« Zum vorherigen Eintrag Zum nächsten Eintrag »
2822 Views
Created with page4