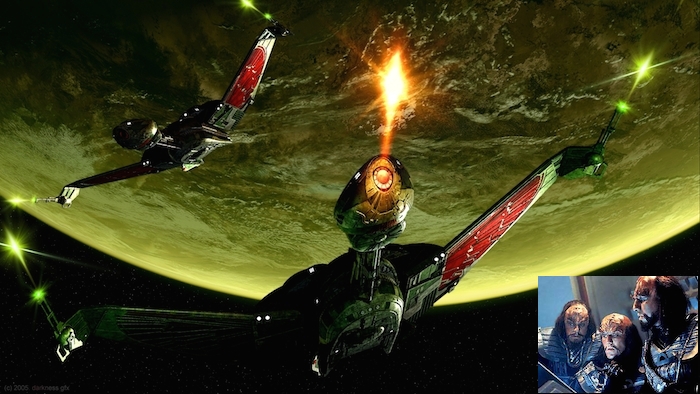 Should we beam greetings to alien civilizations even though they might be Klingons, or just bad company? 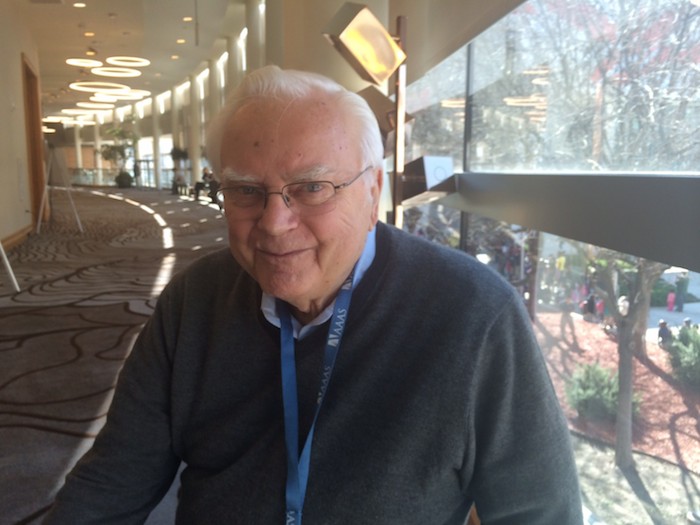 Frank Drake, 84, founder of SETI and creator of thee Drake Equation, shown Feb. 12, 2015, at the American Association for the Advancement of Science convention in San Jose, Calif.

In one of the first news conferences of this year's American Association for the Advancement of Science (AAAS) annual meeting in San Jose, we learned that there's a raging debate going on between those who want to send signals into outer space to communicate directly and actively with alien civilizations and those who think that's cockamamie and potentially dangerous.
This followed press conferences on how we're dumping plastic in the ocean in heinous quantities and how we're facing the serious prospect of "mega-droughts" lasting 35 years or longer in the American Southwest and Great Plains. One might infer that we are a civilization in need of help, and some folks apparently want to look for that help in outer space — a move that one of the news conference participants, astrophysicist and science fiction writer David Brin, called a form of prayer.
The presser was in advance of a formal science session Friday at which the panelists will detail their views more fully. The advocates for "Active SETI" include Seth Shostak and Douglas Vakoch of the SETI (Search for Extraterrestrial Intelligence) Institute, which is just up Route 101 in Mountain View. With few exceptions, SETI has traditionally been a "passive" enterprise. The searchers scan the heavens for radio signals, primarily, though more recently there have been optical searches as well.
The first SETI experiment was conducted at Green Bank, W.Va., in 1960 by radio astronomer Frank Drake, he of the famous Drake Equation, which creates a way to estimate (or guess) the number of communicative civilizations in our galaxy. SETI searches have failed to pick up a signal from a sentient source. That doesn't mean the aliens aren't out there; it could be that they communicate with a technology with which we are unfamiliar.
Vakoch suggested that it's time to go on the offensive.
"Active SETI is a reflection of SETI growing up as a discipline," Vakoch said. "It may just be the approach that lets us make contact with life beyond Earth."
He acknowledged the fears, and cited a much-reported line from Stephen Hawking: "If aliens visit us, the outcome would be much as when Columbus landed in America, which didn't turn out well for the Native Americans." But Vakoch said this is not an argument against active SETI: "Any civilization that has the ability to travel between the stars can already pick up our accidental radio and TV leakage.”
"It's too late to worry about that," said Shostak. As Shostak put in an article titled "Are transmissions into space dangerous?":
"We have already sent signals into space that will alert the aliens to our presence with the transmissions and street lighting of the last 70 years. These emissions cannot be recalled."
But Brin said our leakage  is not a very robust signal compared to what the advocates of active SETI are envisioning. He said this "barn door excuse" (that our signals are already out the door and the aliens can already detect "I Love Lucy") is bogus. He brought up the Fermi Paradox. "Where are they?" asked the great physicist Enrico Fermi at lunch one day at Los Alamos; by Fermi's calculations, given the rate of technological progress in our own civilization, alien visitors who are much more advanced should be common in our galaxy and should have showed up already or somehow revealed themselves. Brin said there are roughly 100 scenarios to explain why we haven't made contact so far. Roughly a dozen of them are unpleasant scenarios, though he did not detail what he meant by that. He did say that we don't know that altruism is the norm in nature.
Vakoch then said Brin is being inconsistent, because he has collaborated on a message that will be carried into space by the New Horizons spacecraft after its fly-by of Pluto later this year.
"No one is going to get it!" Brin interjected. (The spacecraft will journey into the near-void of interstellar space for eons.)
More of this will play out Friday at the full session. Meanwhile, in the back of the room, none other than Frank Drake himself listened to the news conference, and he took time outside the room to talk to this reporter about the history of SETI.
He's not a fan of active SETI, he said — even though he did it in the past. In 1974, he used the ceremonial dedication of a rebuilt Arecibo radio telescope in Puerto Rico to send an encoded message to Messier 13, the Great Globular Cluster in Hercules. It was just a proof of concept stunt, brief, and aimed at stars clustered 25,000 light years away. He took some flak for that from the Astronomer Royal, Martin Ryle, who thought it was reckless.
Said Drake of active SETI: "I think it’s a waste of time at the present. It's like somebody trying to send an e-mail to somebody whose e-mail address they don’t know, and whose name they don’t know.”
Quelle: The Washington Post
Astronomie
2560 Views
Created with page4