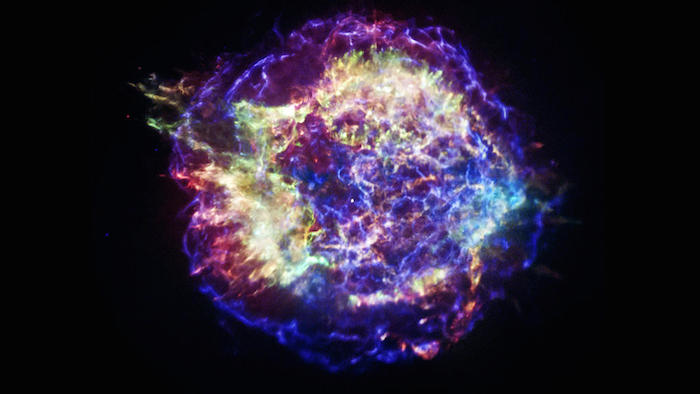 A new 3-D study of the remains of a supernova explosion called Cassiopeia A (Cas A) has found that its interior is made up of a collection of massive bubble-like cavities.  Cas A is one of the most well studied supernova remnants in our galaxy. A team of Harvard-Smithsonian and Dartmouth College astronomers used the astronomical equivalent of a hospital's CAT scan to produce a 3-D map of its interior.  "Our three-dimensional map is a rare look at the insides of an exploded star," Dan Milisavljevic of the Harvard-Smithsonian Center for Astrophysics (CfA), said in a statement.  The supernova was observed about 340 years ago when a massive star exploded, approximately 11,000 light-years away, in the constellation Cassiopeia. As the star blew itself apart, hot radioactive matter streamed outward from the star's core. The expanding cloud of material is now approximately 10 light-years across from Earth's perspective. The complex physics behind these explosions is difficult to model, even with state-of-the-art simulations run on some of the world’s most powerful supercomputers. However, by carefully studying relatively young supernova remnants like Cas A, astronomers can investigate the key processes that drive these stellar explosions.  "We're sort of like bomb squad investigators. We examine the debris to learn what blew up and how it blew up,” said Milisavljevic. "Our study represents a major step forward in our understanding of how stars actually explode." 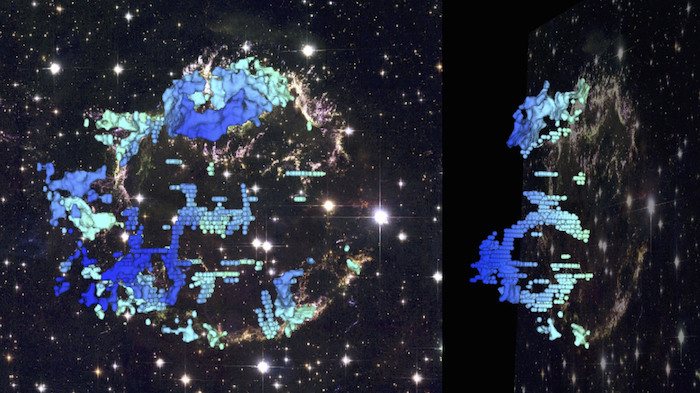 This new 3-D map provides the first detailed look at the distribution of stellar debris following a supernova explosion. The blue-to-red colours correspond to the varying speed of the emitting gas along our line of sight. Image credit: D. Milisavljevic (CfA) & R. Fesen (Dartmouth). Background image: NASA, ESA, and the Hubble Heritage Team.
Milisavljevic and co-author Rob Fesen of Dartmouth College examined Cas A in near-infrared light using the Mayall 4-metre telescope at Kitt Peak National Observatory. They used spectroscopy to measure expansion velocities of extremely faint material in Cas A's interior to provide the crucial third dimension.
Around half a dozen large interior cavities appear to be connected to previously observed rings of debris that make up the bright outer shell of Cas A. The two most well-defined cavities are three and six light-years in diameter.
The cavities were probably created by plumes of radioactive nickel generated during the stellar explosion. Since this nickel will decay to form iron, the team predict that Cas A's interior bubbles should be enriched with as much as a tenth of a solar mass of iron.
As the enriched interior debris hasn’t been detected in previous observations, next-generation telescopes may be needed to find the "missing" iron and confirm the origin of the bubbles.
The research was published in the 30 January issue of the journal Science.
Quelle: SEN
Astronomie
« Zum vorherigen Eintrag Zum nächsten Eintrag »
2864 Views
Created with page4