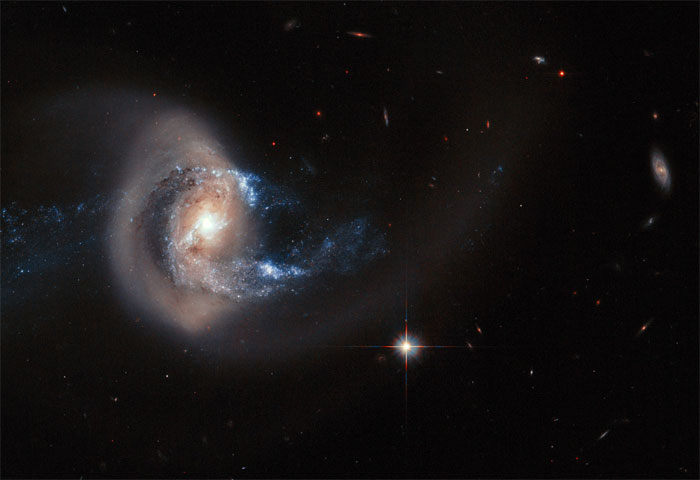 The NASA/ESA Hubble Space Telescope has captured this striking view of spiral galaxy NGC 7714. This galaxy has drifted too close to another nearby galaxy and the dramatic interaction has twisted its spiral arms out of shape, dragged streams of material out into space, and triggered bright bursts of star formation.

NGC 7714 is a spiral galaxy at 100 million light-years from Earth – a relatively close neighbour in cosmic terms.
The galaxy has witnessed some violent and dramatic events in its recent past. Tell-tale signs of this brutality can be seen in NGC 7714's strangely shaped arms, and in the smoky golden haze that stretches out from the galactic centre.
So what caused this disfigurement? The culprit is a smaller companion named NGC 7715, which lies just out of the frame of this image – but is visible in the wider-field DSS image. The two galaxies [1] drifted too close together between 100 and 200 million years ago, and began to drag at and disrupt one another's structure and shape.
As a result, a ring and two long tails of stars have emerged from NGC 7714, creating a bridge between the two galaxies. This bridge acts as a pipeline, funnelling material from NGC 7715 towards its larger companion and feeding bursts of star formation. Most of the star-forming activity is concentrated at the bright galactic centre, although the whole galaxy is sparking new stars.
Astronomers characterise NGC 7714 as a typical Wolf-Rayet starburst galaxy. This is due to the stars within it; a large number of the new stars are of the Wolf-Rayet type – extremely hot and bright stars that begin their lives with dozens of times the mass of the Sun, but lose most of it very quickly via powerful winds.
This Hubble image is a composite of data capturing a broad range of wavelengths, revealing the correlation of the gas clouds and stars in the galaxy. This new picture not only reveals the intricate structure of NGC 7714, but also shows many other objects that are much further away. These background galaxies resemble faint smudges of light, some of them with spiral forms.
Quelle: ESA
Astronomie
« Zum vorherigen Eintrag Zum nächsten Eintrag »
2444 Views
Created with page4