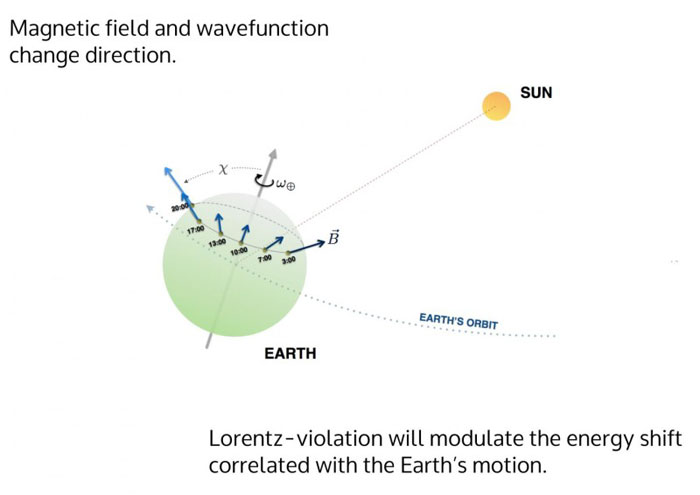 As the Earth rotates every 24 hours, the orientation of the ions in the quantum computer/detector changes with respect to the Sun's rest frame. If space were squeezed in one direction and not another, the energies of the electrons in the ions would have shifted with a 12-hour period.
Credit: Hartmut Haeffner, UC Berkeley
.
Ever since Einstein proposed his special theory of relativity in 1905, physics and cosmology have been based on the assumption that space looks the same in all directions -- that it's not squeezed in one direction relative to another.
A new experiment by University of California, Berkeley, physicists used partially entangled atoms -- identical to the qubits in a quantum computer -- to demonstrate more precisely than ever before that this is true, to one part in a billion billion.
The classic experiment that inspired Albert Einstein was performed in Cleveland by Albert Michelson and Edward Morley in 1887 and disproved the existence of an "ether" permeating space through which light was thought to move like a wave through water. What it also proved, said Hartmut Häffner, a UC Berkeley assistant professor of physics, is that space is isotropic and that light travels at the same speed up, down and sideways.
"Michelson and Morley proved that space is not squeezed," Häffner said. "This isotropy is fundamental to all physics, including the Standard Model of physics. If you take away isotropy, the whole Standard Model will collapse. That is why people are interested in testing this."
The Standard Model of particle physics describes how all fundamental particles interact, and requires that all particles and fields be invariant under Lorentz transformations, and in particular that they behave the same no matter what direction they move.
Häffner and his team conducted an experiment analogous to the Michelson-Morley experiment, but with electrons instead of photons of light. In a vacuum chamber he and his colleagues isolated two calcium ions, partially entangled them as in a quantum computer, and then monitored the electron energies in the ions as Earth rotated over 24 hours.
If space were squeezed in one or more directions, the energy of the electrons would change with a 12-hour period. It didn't, showing that space is in fact isotropic to one part in a billion billion (1018), 100 times better than previous experiments involving electrons, and five times better than experiments like Michelson and Morley's that used light.
The results disprove at least one theory that extends the Standard Model by assuming some anisotropy of space, he said.
Häffner and his colleagues, including former graduate student Thaned Pruttivarasin, now at the Quantum Metrology Laboratory in Saitama, Japan, will report their findings in the Jan. 29 issue of the journal Nature.
Entangled qubits
Häffner came up with the idea of using entangled ions to test the isotropy of space while building quantum computers, which involve using ionized atoms as quantum bits, or qubits, entangling their electron wave functions, and forcing them to evolve to do calculations not possible with today's digital computers. It occurred to him that two entangled qubits could serve as sensitive detectors of slight disturbances in space.
"I wanted to do the experiment because I thought it was elegant and that it would be a cool thing to apply our quantum computers to a completely different field of physics," he said. "But I didn't think we would be competitive with experiments being performed by people working in this field. That was completely out of the blue."
He hopes to make more sensitive quantum computer detectors using other ions, such as ytterbium, to gain another 10,000-fold increase in the precision measurement of Lorentz symmetry. He is also exploring with colleagues future experiments to detect the spatial distortions caused by the effects of dark matter particles, which are a complete mystery despite comprising 27 percent of the mass of the universe.
"For the first time we have used tools from quantum information to perform a test of fundamental symmetries, that is, we engineered a quantum state which is immune to the prevalent noise but sensitive to the Lorentz-violating effects," Häffner said. "We were surprised the experiment just worked, and now we have a fantastic new method at hand which can be used to make very precise measurements of perturbations of space."
Quelle: SD
Astronomie
« Zum vorherigen Eintrag Zum nächsten Eintrag »
2866 Views
Created with page4