The Google Lunar Xprize wants to do something that has never been done before in the history of mankind: land a private spacecraft on the moon that can travel at least 500 meters and transmit both high-definition video and imagery back to Earth, once there.
Today, Xprize handed 5 of the competing teams a combined $5.25 million of the $30 million total in prize money for overcoming key technical risks in landing, mobility and imagery.
The prize money is part of a series of interim Milestone Prizes meant to reward teams who meet certain requirements necessary at this stage in the competition. They are an optional reward, designed to recognize advanced progress in each team’s spacecraft.
The United States, Russia and China have been the only countries so far with the ability to compete in the space race since the first unmanned moon landing in 1959 . However, technological advancements and private endeavors have dramatically reduced the cost of going to the moon from billions to mere millions of dollars.
This helps Bangalore-based Team Indus compete against billionaire-backed Moon Express in the Xprize space race. Both teams received $1 million in the Landing category of the Milestone Prizes.
“We believe that we do our best work when we compete and one of the critical elements of any XPRIZE is engaging the competitive spirit that we all feel.” Xprize CEO Peter Diamandis wrote in the Huffington Post. “Just as the NFL playoffs narrowed fans’ focus on the road to this week’s Super Bowl, the Milestone Prizes allow the public to have a routing interest in the competition and know which teams to follow.”
- 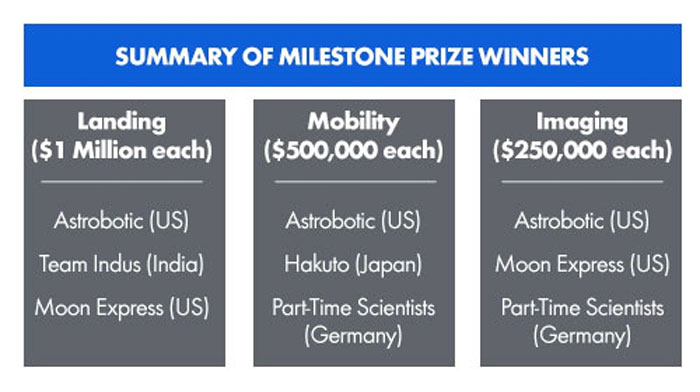 Teams that don’t win the Grand or Second Place prize will be able to keep their Milestone winnings. However the prize money will be deducted from the $30 total if they do win the Grand or Second Place prize.
Each team will be awarded these Milestone Prizes at a private event tonight hosted by XPRIZE and Google at the California Academy of Sciences in San Francisco.
Quelle: TC-News
---

ABOUT US
Team Part Time Scientists has been selected to compete for two of the Milestone Prizes: the Mobility Prize and the Imaging Prize.
The Part-Time Scientists team is the first Google Lunar XPRIZE participant based primarily in Germany. The PTS team consists of dozens of scientists, engineers, and entrepreneurs from several countries around the world. The efforts of team members are coordinated over the Internet from their headquarters in Berlin. The team is funded in part by donations from individuals, as well as monetary and technical support from key sponsors. The PTS team is perhaps the youngest team in the Google Lunar XPRIZE, and draws on members from a number of technical disciplines including physics, information technology, electrical, mechanical, and software engineering.
Although team members are scattered across Northern Germany and around the world, the team makes extensive use of online collaborative tools to keep everyone up to date and moving forward. In addition to developing an innovative lunar lander and rover, the team also plans to contribute to the development and building of an innovative new global communications network known as COMRAY. The COMRAY network will link together radio dishes from around the world to enable 24/7 communications with in-space assets. Utilizing amateur radio frequencies, this network could potentially provide a cheaper alternative to the currently existing government and proprietary commercial networks.
Mehr darüber hier: http://ptscientists.com/mission/
TEAM MEMBERS
Robert Böhme
Daniel Ziegenberg
Wesley Faler
Karsten Becker
Part-Time Scientists
Franklin Fomby
Michael Doornbos
-
Quelle: Google LUNA X-Prize
-
Raumfahrt
« Zum vorherigen Eintrag Zum nächsten Eintrag »
2748 Views
Created with page4